'She thought she was going to die,' says husband of hiker who spun during helicopter rescue

Viral video captured the rescue, where the woman spun 174 times as she was being hoisted by a helicopter off Piestewa Peak. 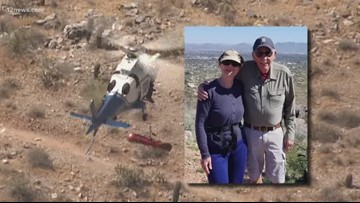 PHOENIX — The husband of the woman trapped in a spinning basket rescued from Piestewa Peak on Tuesday morning is speaking about the incident and his wife’s condition.

Team 12’s Antonia Mejia met him Thursday at the hospital where 74-year-old Katalin Metro is still recovering. Her husband, George Metro, said she is still feeling nauseated and dizzy after she spun 174 times during the mountain rescue gone wrong captured in the now-viral video.

George Metro said he and his wife were hiking at Piestewa Peak and were near the end of the trail when she stubbed her toe and fell face down onto a rock. Metro said she broke her nose and her glasses, had injuries to her left hand and left leg and was bleeding.

When crews arrived, they decided to airlift Katalin because she complained of hip pain, and they didn’t want to make any potential injury worse.

That’s when her frightening ride in the Stokes Basket began.

Metro said he watched from the ground and that firefighters nearby were in shock at the spinning and how long it went on.

“They just—one of them said, ‘Oh my gosh,” Metro said. “I think they were waiting for the spinning to stop just like I was.”

He said he didn't know if she was dead or alive as she spun mid-air.

Metro met his wife at the hospital after trauma center staff evaluated her condition.

Metro said his wife did deep-breathing exercises to keep from passing out during the ordeal.

"The blood was going to her head and eyeballs," Metro said.

He said his wife is still too dizzy to get out of bed, and she hasn’t been able to do physical therapy for her leg.

For the entire interview with Geoge head over to the 12 News YouTube page.