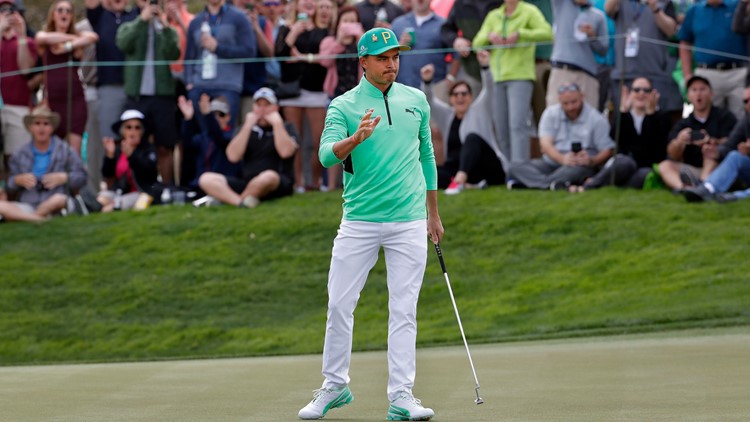 Photo by: AP
Rickie Fowler waves after making a birdie putt on the fifth green during the third round of the Phoenix Open PGA golf tournament, Saturday, Feb. 2, 2019, in Scottsdale, Ariz. (AP Photo/Matt York)

SCOTTSDALE, Ariz. - For much of the day Sunday, in the final round of the Waste Management Phoenix Open, there were shades of 2016, when Rickie Fowler blew a two stroke lead with two holes to play and ended up losing to Hideki Matsuyama in a playoff.

After coming into the day with a four-stroke lead at -20 following three days of near-perfect golf and near-perfect weather, Fowler looked shaky in the rain on the front nine after an errant shot led to a double bogey at the fifth.

He kept it together with pars, then extended his lead again to four strokes when he birdied the 10th. But, disaster struck for the 30-year-old at the 11th hole when a water ball landed him a triple bogey. He followed it up with another bogey on the par 3 13th. Just like that, Fowler was +5 on the day and no longer in the lead, which was taken over by South African Branden Grace.

Fowler was able to capture a much needed birdie on the par 5 15th to get back into a tie for the lead at -16.

Meanwhile, Grace crumbled on the par 4 17th. While going for the green off the tee, Grace found the water for the second straight day and saved a bogey to move to one off the lead.

Fowler hit a perfect drive on 17 and found the green leading to a two-putt birdie to seal the deal, barring any significant missteps on the 18th. A drive into the church pews of the fairway bunker on 18 once again brought onlookers to edge, but Fowler hit a solid shot to fairway before the green. Fowler nailed an up-and-down to take the two-stroke victory. His final round 74 was the highest final round score by a winner in tournament history, granted most Sundays at the Waste Management Phoenix Open have the wind and rain that Sunday did.

Just two years after an emotional loss at TPC Scottsdale, Fowler redeemed himself and captured the one that got away. It's the fourth time Fowler has finished in the top 5 at the tournament and it's his fifth career PGA Tour win.