“I think everyone should be concerned about the Proud Boys," said Devin Burghart. 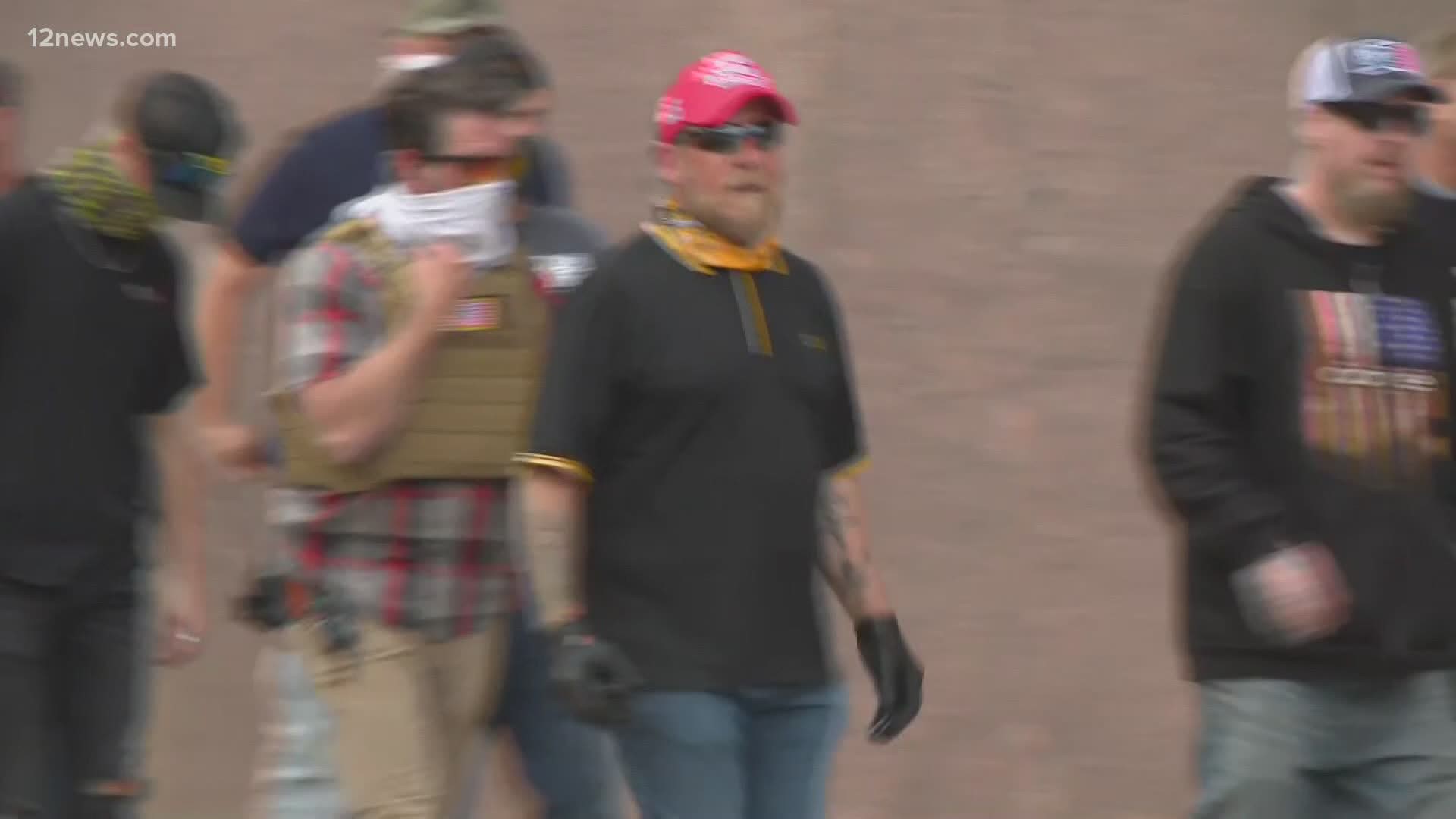 PHOENIX — According to an interview with the Wall Street Journal, the leader of the Proud Boys, Enrique Tarrio, said 2,000 to 2,400 members of the group were at the Capitol Wednesday at a protest that turned into a riot.

At the same time, a large group of men donning black and gold polos, the unofficial uniform of the group, showed up at the Arizona State Capitol for a protest alleging election fraud.

Protests claiming voter fraud continue despite state and national leaders affirming there were no election irregularities.

According to the Arizona Proud Boys Parler account, a site known as a "free speech" social media platform, the far-right group describes themselves as "western chauvinists."

According to the Parler account, members of the Arizona chapter were also present in Washington DC on Wednesday. The account showcased a photo at the protest of a man donning an American flag sweatshirt and ski mask waving the Arizona flag. The photo was captioned, "Whose house?"

The group's leader, Tarrio, was not at the protest himself because he is currently banned from DC after he was accused of vandalizing a Black Lives Matter banner at a historic Black church.

After the riots in Washington unfolded, Tarrio posted to Parler, "Proud of My Boys and my country."

"Even though they have some members of different races, still at their core is this kind of white hegemony which they've been pushing so strongly," said Devin Burghart, executive director of the Institute for Research & Education on Human Rights.

The Southern Poverty Law Center has designated the Proud Boys as an extremist hate group.

The group got national attention during a presidential debate in September when President Trump was asked to denounce white supremacy, telling the group to, "Stand back and stand by."

"These organizations have developed a variety of different flavors, if you will, to try to appeal to Americans, whether that be efforts aimed at young people like the so-called "groypers" which are just the alt-right in new packaging. Or it's far-right paramilitary groups like the militias and the "oathkeepers" or it's the violent street thugs like the Proud Boys," Burghart said.

Over the past several years, members of the group have been arrested on various occasions on a number of charges, ranging from gang assault to weapons charges.

In 2018, 10 members were arrested after a violent fight with Antifa supporters in New York City. A video showed one of the Antifa protesters throwing a bottle at the Proud Boys who retaliated with physical violence.

Though the group makes frequent appearances in Arizona, Phoenix police have told 12 News the group is on their radar but to their knowledge, the group has not been violent here. A spokesperson said, "Sometimes they appear at political gatherings but we have had limited contact with them."

“I think everyone should be concerned about the Proud Boys both because of the toxic nature of their politics but also the kind of danger that they bring to communities when the kind of violence follows in their wake," Burghart said.

12 News has reached out to the Arizona Proud Boys chapter for comment but so far, we have not heard back.