Here are 4 things to know as a new round of turmoil engulfs partisan audit. 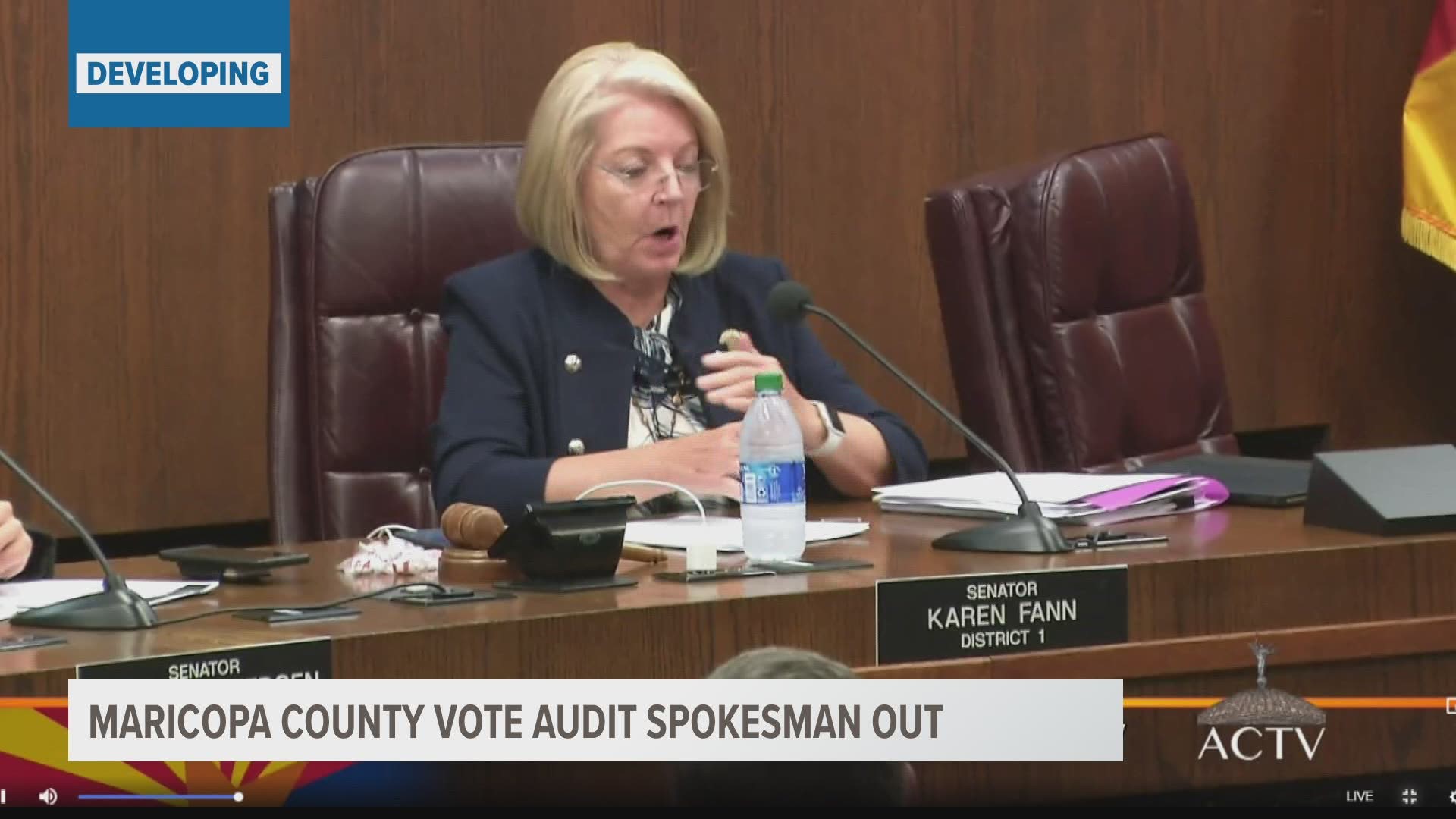 PHOENIX — Arizona's partisan election review is entering its fourth month with a fresh new round of turmoil.

Here are three major developments over the last 48 hours and one unknown still hanging out there:

Senate President Karen Fann subpoenaed more election materials Monday from the Maricopa County Board, including materials the county has already said it doesn't have or won't turn over.

The court battle was punctuated by Senate Republicans' failed vote to hold the five-county supervisors in contempt. A "yes" vote might have subjected the supervisors to arrest.

Once again, Fann is seeking information about the county's routers. The apparent goal is to investigate a conspiracy theory that the county's ballot-counting equipment is connected to the internet.

Independent auditors have confirmed the machines are not connected.

Former President Donald Trump was fixated on the word "router" during his speech at a Phoenix rally Saturday. He said the word 10 times in 36 seconds.

Indeed, Trump was fixated on the Senate GOP audit itself as a first step toward his restoration to the presidency.

At the end of the almost two-hour speech, he pointed at the Republican senators in the front rows: "The whole country is watching what you have done."

County spokesman Fields Moseley said the board believes it has provided everything "competent auditors" need:

"Senate President Fann made it clear another subpoena would be coming even though the county has already provided everything competent auditors would need to confirm the accuracy and security of the 2020 election.  We received the new subpoena today.  The board will review the materials requested with our legal team and respond in the coming days."

The subpoena gives Maricopa County one week, until Aug. 2, to comply.

The subpoena threat has been bruited about for the last few weeks. It came up again during Fann's public meeting two weeks ago with Cyber Ninja Doug Logan, lead contractor for the Senate GOP's audit team.

Logan has never overseen an election audit. He has promoted the falsehood that Donald Trump won Arizona by 200,000 votes in 2020. Democrat Joe Biden was certified as the winner by 11,000 votes. Biden was the first Democratic presidential nominee to win Maricopa County in 72 years.

The Senate also sent its first subpoena to Dominion Voting Systems, the company that leases ballot-counting equipment and software to Maricopa Country, according to the Associated Press.

Dominion has been the target of countless election conspiracy theories.

A Dominion spokeswoman provided this response Tuesday, similar to one released in May:

“Releasing Dominion’s intellectual property to an unaccredited, biased, and plainly unreliable actor such as Cyber Ninjas would be reckless, causing irreparable damage to the commercial interests of the company and the election security interests of the country. No company should be compelled to participate in such an irresponsible act.”

Ken Bennett is out but still in

Senate Republicans' audit liaison Ken Bennett is out, but he'll be coming back in, according to Fann.

The former Arizona secretary of state has been banned from the state fairgrounds building where Cyber Ninjas and its contractors are finishing a machine count of all the ballots cast in Maricopa County in 2020.

(The contractors paid almost $30,000 for two paper-counting machines; the Senate is expected to reimburse them.)

Bennett was brought into the audit as a credible voice who had served as the state's top elections officer.

The friction between Bennett and the contractors goes back a few months. It was out in the open last week.

A lead security guard for the contractors tried to block Bennett from speaking with me at the fairgrounds building. "You're not the spokesman," the guard told Bennett. When I asked Bennett what that was about, he responded: "Power play."

Strange ending to #azauditpooler stint. Cowboy Hat Andy tried to block Ken Bennett from speaking to me. ‘You’re not the spokesman,’ Andy said. Bennett spoke anyway. I asked what that was about. “Power play.” BTW KB insists Logan was right re 74,000 early ballots. pic.twitter.com/62SEjgHHSL

By the end of the week, Bennett had been barred from the site but he said he said he was trying to work things out.

On Phoenix radio Monday morning, Bennett told interviewer Mike Broomhead that he was frustrated by Doug Logan's lack of transparency. "Troubling things have got to be fixed," Bennett said.

By late in the day, word leaked that Bennett was banned.

Fann confirmed to 12 News via text message that Bennett was not allowed inside the audit site. But she said he would still have a role to play in reviewing the audit results.

"Ken is a valuable asset to the Senate audit and will continue to be so," Fann texted.

"The physical work is expected to finish up in the next few days and the auditors will take all the data back to their labs for analysis."

The Senate's lease for the fairgrounds building ends Saturday. A fairgrounds spokeswoman said Tuesday the Senate had not asked to extend it.

Fann's text went on: "When the draft report is ready for review, it is planned for Ken, Senator (Warren) Petersen, myself and our legal team will be reviewing the report with the auditors to ensure all information is clearly explained and documented correctly.

"The auditors were hired to do a job. We should not be looking over their shoulder, telling them how to do their job or asking for premature information."

Bennett responded via text: "I don't have a comment at this time."

RELATED: How a Scottsdale woman and her late mother were swept up in volunteers' investigation of 'dead voters'

Last February's Senate showdown over Fann's first subpoena failed by one vote when Republican Sen. Paul Boyer of Glendale sided with the Democrats to reject holding the County Board in contempt.

The Senate isn't in session again until January. But if it were, a contempt vote would likely fail again.

Two more Republican senators, T.J. Shope of Coolidge and Michelle Ugenti-Rita of Scottsdale, have signaled they don't like how the partisan audit has been conducted.

In a tweet over the weekend, Ugenti-Rita ripped Fann's "total lack of competence" in a "botched" audit.

something every candidate on that stage praised. I’ll put my record of fighting for election integrity up against anyone. What I won’t do is vote for “show” legislation that does nothing to strengthen election integrity and introduced for self serving reasons. (2of5)

The $3 million question for Fann

Last April, before the county handed over its ballot-tabulating machines to the Senate, Fann agreed to cover any costs if the machines were damaged in any way.

The County Board voted two weeks ago to spend almost $3 million to replace election machines examined by the Senate contractors.

When will the county file a claim against the Senate seeking reimbursement?

Insurance would cover the Senate's costs. But if Fann breached the contract, under state law, insurance would not cover a county claim.