'This is unhinged': Trump under fire from Republican election official as county challenges Arizona audit

Maricopa County will respond to new Senate allegations Monday. Ballot recount on hold for a week, but GOP spokesman says recount could expand to all races. 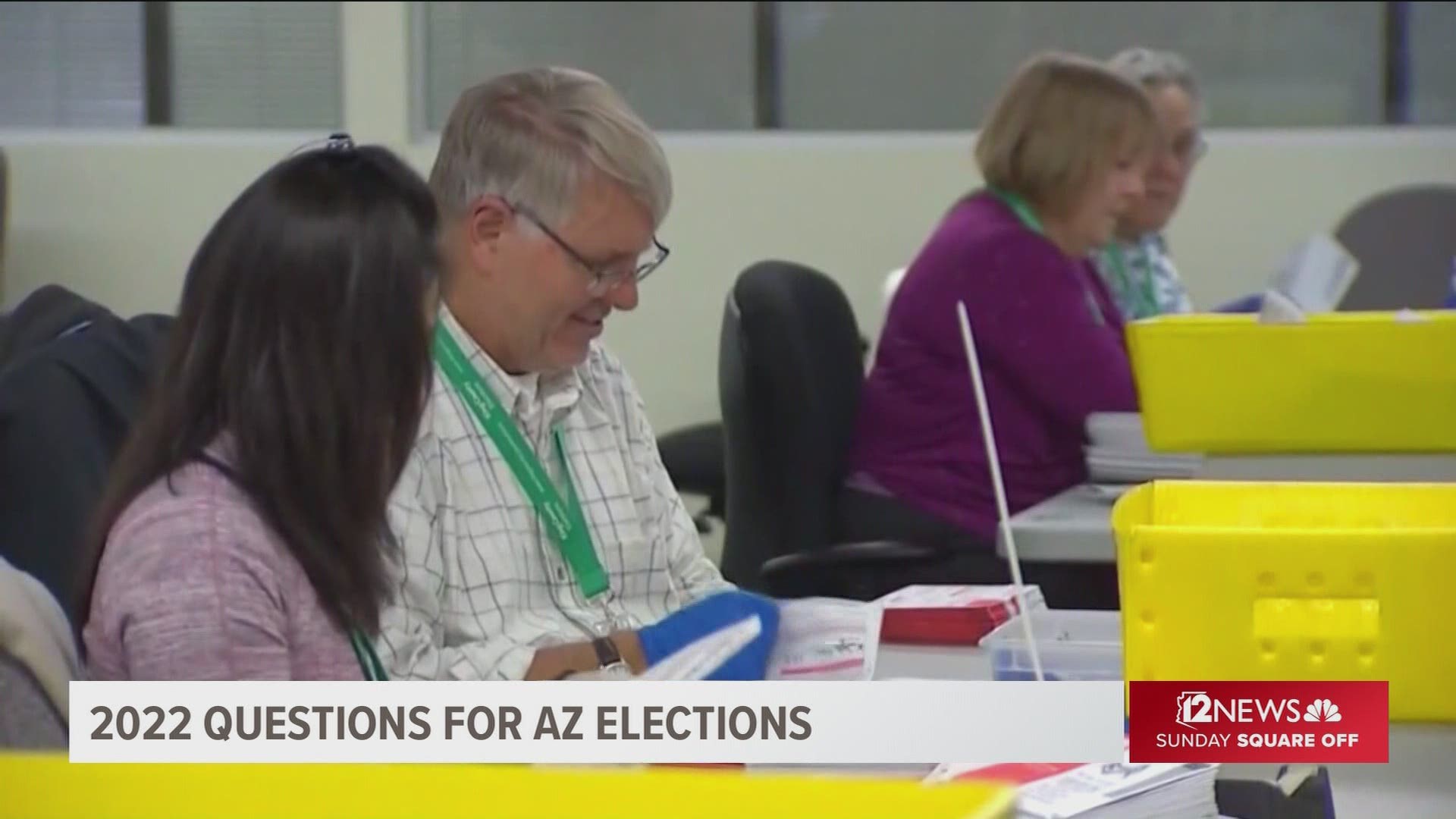 PHOENIX — Maricopa County leaders are on a collision course this week with the Senate Republicans running a recount of the county’s 2020 vote.

The potential impact on the Senate’s 4-week-old partisan election audit could become clear as soon as Monday, when the Maricopa County Board meets to respond to “false accusations” by Senate Republicans.

Here's what you need to know as the week starts:

'We Can’t Indulge These Insane Lies'

Republican County Recorder Stephen Richer set the tone for Monday's meeting with three words in a viral tweet: “This is unhinged.”

The first-term recorder took aim squarely at the leader of his party, former President Donald Trump:

"We can’t indulge these insane lies any longer. As a party. As a state. As a country,” Richer tweeted.

Wow. This is unhinged. I’m literally looking at our voter registration database on my other screen. Right now.

We can’t indulge these insane lies any longer. As a party. As a state. As a country.

A Trump email Saturday accused the county of an “unbelievable election crime.” Trump exaggerated allegations that some election records were deleted.

Richer stood up to Trump in a way few Republicans have.

Richer’s office plays a role in elections, which are overseen by the majority Republican County Board.

On Friday, County Supervisor Bill Gates had his own stand-up-and-be-counted moment.

His op-ed in the Arizona Republic declared: “We need more Republicans to return to dealing in truth & reality.”

Gates blasted fellow Republicans for embracing the Big Lie that the election was stolen from Trump.

“If Republicans become the party of the “Big Lie” – if we encourage this madness much longer – we will lose credibility with the majority of Americans on issues where I believe we have better ideas. We will do lasting damage to our republic.” https://t.co/LlmG9EF8RL

The audit leader hired by the Senate GOP, a Florida-based company called Cyber Ninjas that has no election audit experience, as well as the major fund-raisers for the audit, have promoted the lie that the election was stolen.

The Maricopa County Board will hold a special meeting at 1 p.m. Monday to respond to “false accusations” by Senate President Karen Fann about the election materials provided for Senate Republicans’ audit.

Elections officials are expected to rebut a long list of allegations that include deleted records and spoiled ballots.

The audit’s Twitter feed posted one of the allegations first last week:

Breaking Update: Maricopa County deleted a directory full of election databases from the 2020 election cycle days before the election equipment was delivered to the audit. This is spoliation of evidence! pic.twitter.com/mY0fmmFXAm

"The social media feeds are being used as a way of releasing photos, pictures, documents … and using it to fuel the fire,” said Tammy Patrick, a former Maricopa County elections staffer who is now senior elections adviser for the Democracy Fund.

The feeds, she said, “are in some way implying those are bad or wrong, when they don't understand what it is they're looking at."

The county is making its case on Twitter by raising questions about the audit under the hashtag #RealAuditorsDont:

#RealAuditorsDont: Use official communication channels to solicit private donations while offering no transparency to the public about funds raised. pic.twitter.com/NUb0ALVdyz

You can get information on the meeting livestream here.

We should find out Monday whether any county representatives will show up for Senate President Fann’s scheduled meeting with them Tuesday.

Fann wants them to explain in a public setting and on live stream why they ignored a subpoena to hand over the county’s routers, the “highway” that allows networked computers to connect with each other.

“There seems to be evidence of a directory including databases related to the 2020 election that were deleted and we want to know why," said Senate audit liaison Ken Bennett.

The Republican audit team plans to test a conspiracy theory that the county's ballot-counting machines were hacked.

The county, including Sheriff Paul Penzone, pushed back hard on the subpoena, warning that handing over computer routers could expose residents’ private information and compromise public safety.

The Senate meeting invitation represents a step back from an initial threat by Fann's lawyer to compel county officials to attend the meeting with a subpoena.

No real answers yet from the County, just angry deflections to President Fanns list of questions. I thought she asked nicely.

Fann has said the partisan recount is not intended to overturn the election results, but to answer voters’ questions about the election.

Polls show a majority of Republican voters believe Trump won the 2020 election, but a majority of all voters agree Biden was the winner.

The hand recount of 2.1 million Maricopa County election ballots is on hold until next Monday.

All the ballots are being stored in semitrailers inside a State Fairgrounds building, after the audit cleared out of Veterans Memorial Coliseum on Friday.

Phoenix high schools booked the coliseum for graduations this week.

Senate Republicans’ lead auditor estimated in his contract that the hand recount would take 20 days, ending about May 15.

An estimated half a million ballots were counted in that time, according to Bennett. Senate Republicans have not provided precise data on the ballot count. The reason: “It’s not an election.”

Bennett, who had said last month the recount would be done May 14, when the Senate’s original rental of the coliseum ended, now says the recount could go into late June. Last week, the Senate got a rental extension until June 30.

Will Recount Expand to Other Races?

The hand recount is looking at votes cast in the elections for president and the U.S. Senate.

Last week, Bennett told a reporter that results of all races would be tabulated using ballot images and compared with the results of the county’s ballot-counting machines.

"We will be looking at the images of all 2.1 million ballots,” Bennett said.

The audit has no firm deadline for completion.

Patrick, the national elections expert, said, “Real audits … have a timeline and a deadline.”

"That purported purpose seems to move and change on any given day.”

Miss an episode of Sunday Square Off? See every segment of the show here on our 12 News YouTube Playlist.