'This is not over': After anti-abortion bill fails, proponent promises to pass Arizona Senate

Mesa state Sen. Tyler Pace was the deciding vote on a bill that could have jailed doctors who performed abortions on babies with genetic abnormalities. 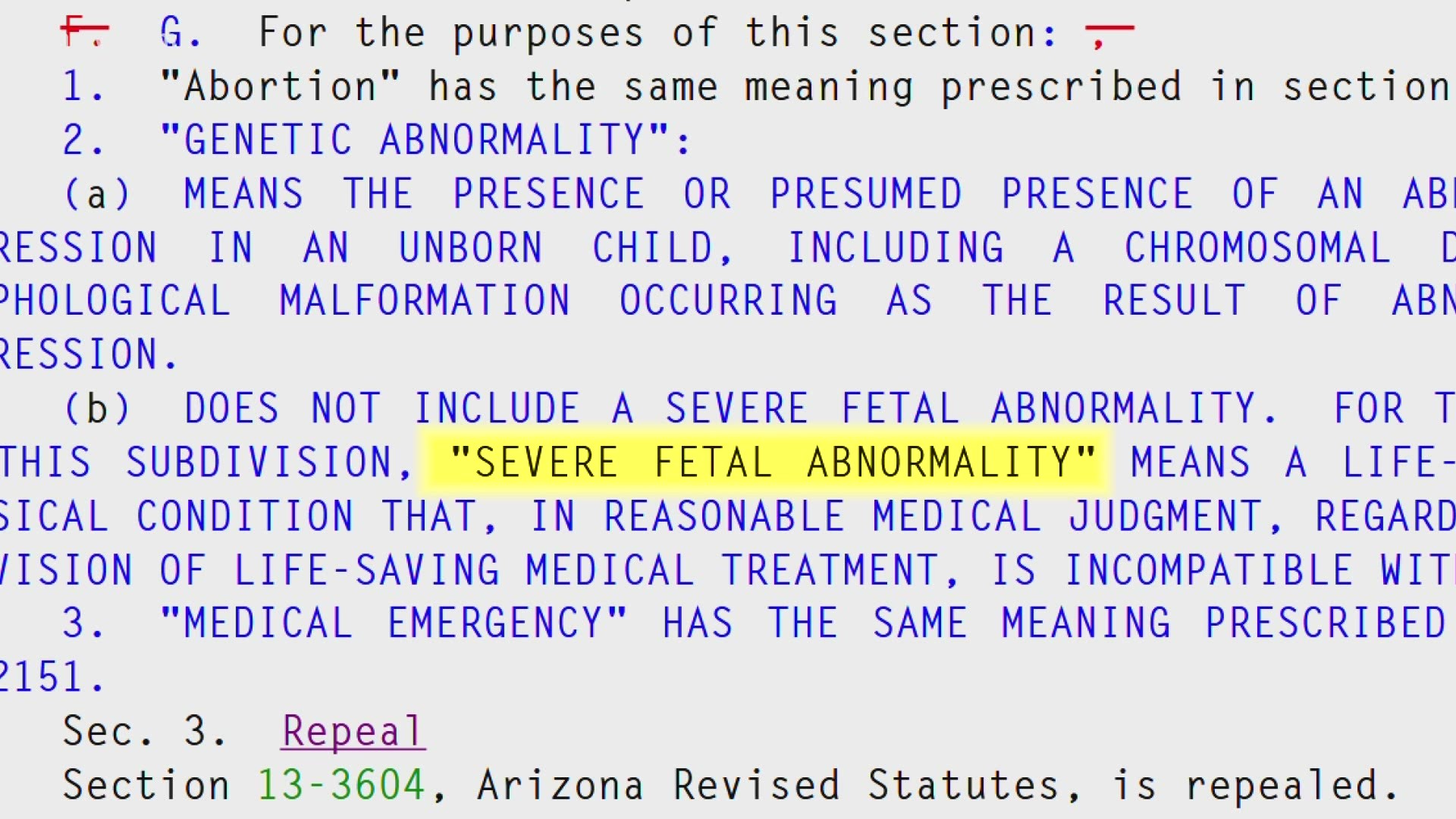 PHOENIX — Senate Bill 1457 was one vote short of the governor's desk: State Sen. Tyler Pace's was the deciding factor.

The bill would make it a class six felony for doctors to terminate a pregnancy if the child had a survivable genetic abnormality.

The measure fell by a final vote 14-16 Wednesday. Bill sponsor Nancy Barto switched her vote at the end in a move that will allow her to bring the bill back up later.

But supporters of the bill say it is not dead.

Pace said on the floor while he is pro-life, he had issues with some of the language in the bill.

"If you’re a physician and a woman says she would like an abortion and then discovers the child has a genetic abnormality that is not severe or fatal would the physician be able to perform the abortion?" Pace asked while explaining his vote.

The bill's stated objective is to protect unborn children with a genetic abnormality such as down syndrome.

“This is a step to protect children, unborn children, who have a genetic condition like down syndrome, cystic fibrosis and dwarfism,” Cathi Herrod, president of the Center for Arizona Policy, said.

Herrod has been one of the major forces behind pro-life legislation in Arizona in the past few years.

If passed, the legislation could have doctors who preform abortions on an unborn child for the sole reason of a genetic abnormality face jail time and be guilty of a felony.

Kwatra said she fears the threat of jail time could change the advice doctors give their patients.

"Doctors who have to work in an environment, who are scared of going to jail for doing their jobs, are not going to really be able to counsel their patients," Kwarta said.

The legislation does have an exception to potential criminal charges if there is reasonable medical judgment that there is a “severe fetal abnormality” that is incompatible with life.

Kwarta said there are grey areas, which could impact a doctor's judgement.

Herrod said she believes doctors should be able to make a determination.

"They know how to make a diagnosis," Herrod said.

The legislation also includes provisions that would require a mother to be asked whether to cremate or bury the body of the aborted fetus.

The legislation would also ban direct to the consumer abortion pills.

While the bill was defeated in the Senate Wednesday, the bill is not dead.

Bill sponsor Nancy Barto switched her vote to a "no" before voting closed which will allow her to bring the bill back up at a later date.

Herrod is confident that by the end of session, the votes will be there to pass some version of the bill.

"This is still a pro life legislature we will meet the concerns and move on," Herrod said.