'Take the mask and shove it': Kari Lake leads anti-mask rally at ASU. Here are 5 takeaways

GOP candidate for governor makes dubious pledge to students. Supporters include Jan. 6 participant and anti-masker who tried to ruin a business. 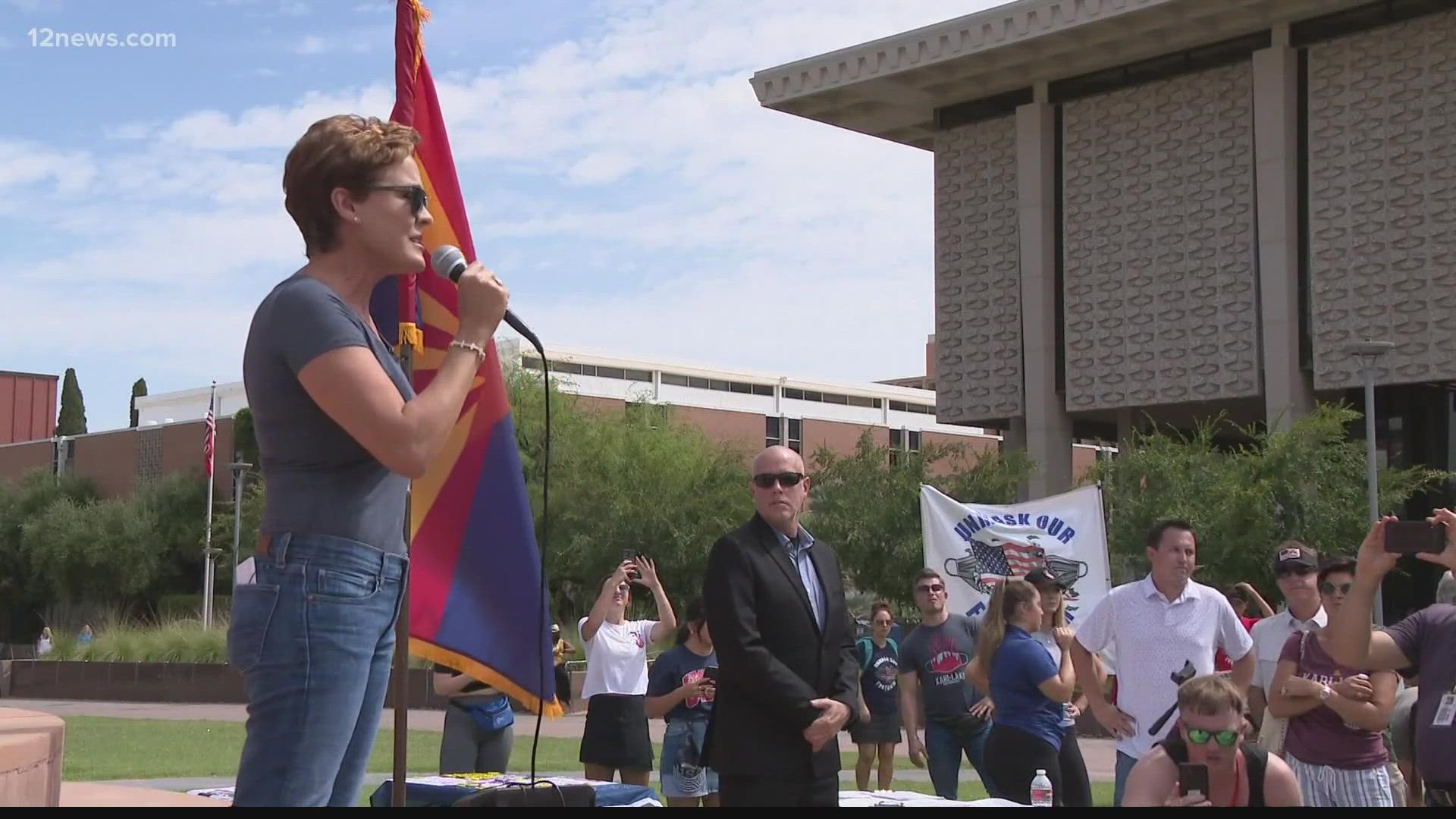 "Who is sick and tired of this crap?" said the former TV news anchor turned Republican candidate for governor.

Lake dangled a face mask from her raised left hand and then stepped on it, as the crowd cheered.

She later told the crowd of about 100, "Take the mask and tell Michael Crow to shove it."

Here are five takeaways from the Lake rally:

'I Will Pardon Every Patriot'

During her four-minute speech, Lake offered no ideas for how to respond to the surging pandemic, beyond refusing to wear a mask.

"Remember slow the spread?" she said. "We're on Day 515 of these bastards trying to destroy our lives."

The state is enduring a fourth wave of COVID-19 infections.

Cases have climbed to a six-month high, and many school districts are struggling to keep classes full.

As of Friday, Arizona's seven-day COVID-19 death rate per 100,000 people ranked 11th among states and territories, according to the U.S. Centers for Disease Control and Prevention.

Lake repeated a dubious offer to students she made recently on social media: If elected governor, she would pardon anyone cited for violating ASU's new policy requiring face masks indoors.

"I'm here to tell you: Rack up tickets," she said.

"I don't care if they give you ticket after ticket. If they arrest you, on Day 1 when I'm governor, I will pardon every patriot who stood up against this tyranny."

The Arizona Constitution doesn't give a governor pardon power over tickets or misdemeanor offenses. The power to pardon applies only to criminal convictions.

Any discipline at ASU would likely be handled under the university code of conduct.

The first-time candidate lashed out when I tried to ask a question as she quickly left the campus.

"I noticed you would not say the Pledge of Allegiance and that's really despicable," Lake said as she continued to walk away.

Lake couldn't possibly have seen me saying the pledge: I had a mask over my nose and mouth during the entire rally.

The self-described former journalist dashed off without taking a single question.

She posted her campaign's video of the encounter on social media.

Lake has built her campaign around her break with the "corrupt news media" last spring after two decades in a high-profile job at a Fox-owned TV station in Phoenix.

Lake's supporters were eager to talk at the 12 News crew.

Several men harassed us as we tried to report on the event.

Two of the men have troubling backgrounds that stood out:

Micajah Joel Jackson shouted at me repeatedly while recording me and my photographer at work. He posted the video on social media.

Jackson was arrested after the Capitol insurrection on Jan. 6 on charges of illegally storming the capitol with the white supremacist Proud Boys.

He has pleaded not guilty to four counts and was released on his own recognizance, according to federal court documents. Among the release conditions are no contact with the Proud Boys.

Ethan Schmidt tried to insert himself into our interviews, with cell phone camera in hand.

Schmidt is an anti-masker best known for posting a video of himself refusing to leave a Mesa wig shop after he ignored the store's mask requirement.

Cancer patients who are at high risk of a COVID-19 infection are regular customers of the shop.

Schmidt claimed the store was discriminating against him.

"I care about health so much that I go around and tell people masks don't work," Schmidt says to the store staff in the video.

"Well then, you need to leave," a staff member responds.

Schmidt tried to ruin the business by posting the store's name, phone number and address on social media.

With still a year to go until the Republican primary for governor, Lake is widely viewed as the front-runner among the five top-tier candidates. The four other candidates are:

Lake's more than 20 years as a television news anchor in the Phoenix market gives her a high name recognition that her rivals can't match.

Lake traveled to South Dakota earlier this week to attend a "symposium" staged by a leading promoter of falsehoods about the 2020 election, "My Pillow Guy" Mike Lindell.

Former Trump adviser Steve Bannon, a Lake cheerleader, interviewed her at the event for his online program.

IN THE GOVERNOR'S RACE Republican candidate @karilake joins Steve Bannon at My Pillow Palooza in South Dakota. Bannon is a leading purveyor of election lies. https://t.co/o8s27rQCib