The U.S. Capitol was placed on lockdown Wednesday afternoon and police ordered evacuations of several buildings. 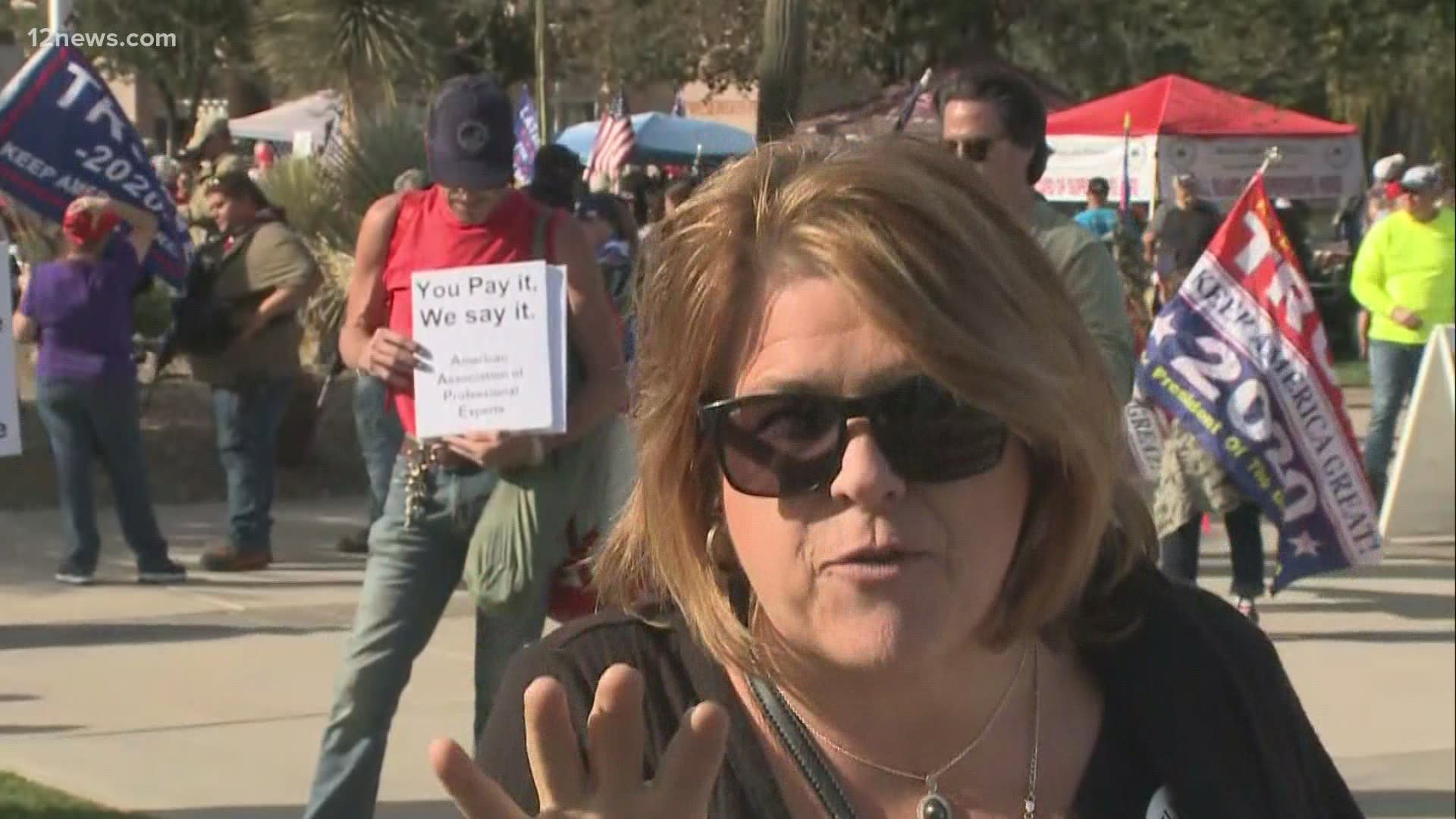 Members of Congress were escorted out of the room.

This comes after President Donald Trump addressed his supporters vowing "never to concede" the election in a speech on the Ellipse, large crowds of pro-Trump protesters marched to the U.S. Capitol and breached police barricades, making their way into the building, outside Senate chambers.

Congress was meeting to certify the votes for President-elect Joe Biden's victory.

All Arizona senators and representatives are safe, according to tweets or information from their offices.

Four people died in the riots on the U.S. Capitol. One woman was shot and killed by Capitol Police, while three others suffered medical complications.

Here are the latest numbers on deaths, officers injured and arrests following the violent riots on the U.S. Capitol on Wednesday. pic.twitter.com/qsu4a8kE89

U.S. Rep. Paul Gosar previously objected to Arizona's election tally. U.S. Rep. Andy Biggs also said in a statement that he would object to the Electoral College count in Arizona.

I swore and oath to protect and defend the Constitution of the United States on behalf of those who elected me to represent them. Let history record that today, that was done. pic.twitter.com/eeSmU7GDo2

Arizona Rep. Paul Gosar says he will move forward with his objection of Arizona's tally with Sen. Ted Cruz.

Leftist violence—or any violence— will not deter our mission for truth and transparency. The people need and deserve the truth. #StopTheSteaI2021 @ali @NBCNews @michellemalkin

Rep. Paul Gosar, who objected to Arizona's election tally in Washington D.C. prior to the Capitol building being stormed by rioters, appears on FaceTime speaking to crowd of pro-Trump supporters at Arizona State Capitol.

A glitchy Paul Gosar now appearing at the rally via FaceTime #12News pic.twitter.com/AHxFRPwc3j

As a result of the unprecedented and ongoing violent situation in Washington, D.C., we have required the removal of three @realDonaldTrump Tweets that were posted earlier today for repeated and severe violations of our Civic Integrity policy. https://t.co/k6OkjNG3bM

Congress will reconvene at 8 p.m. Eastern Time to continue the joint session to certify the votes for the 2020 election.

'We now will be part of history, as such a shameful picture of our country was put out to the world, instigated at the highest level.' @SpeakerPelosi's 'Dear Colleague' email announcing Congress will reconvene tonight. #12News pic.twitter.com/CxpAzIWSrr

Minnesota Rep. Ilhan Omar says she is drawing up articles of impeachment against President Trump.

After an unprecedented breach of the U.S. Capitol, Rep. Ilhan Omar said she is drawing up articles of impeachment against President Trump. https://t.co/xDuPA56lPK

A woman died from injuries after she was shot inside the U.S. Capitol building as pro-Trump supporters tried to break into the House Chamber, according to the Associated Press.

It is not known yet what exactly led to the woman being shot, but a photo from CBS News' Zak Hudak shows law enforcement with guns drawn inside the House Chamber around 2:46 p.m.

President Donald Trump has told supporters to go home in a video while maintaining false claims of election fraud.

This is a sad day for America. It exposes for all to see the reckless selfishness of President Trump and the cynicism of elected Republicans, who defended his unconstitutional effort to cling to power. They have shamed our country, and delighted our enemies.

Arizona Secretary of State Katie Hobbs called the situation an "attempted coup." Hobbs herself was the target of President Trump supporters after she declared the state election to be free of fraud.

RELATED: 'It’s sort of this helpless feeling': Katie Hobbs responds to threats against her, family

Today’s events in Washington DC are, unfortunately, the natural conclusion to months of conspiracy theories and outright lies. pic.twitter.com/r1a6aTgp9u

Another protest is taking place outside the Arizona State Capitol. Demonstrators are opposing the results of Biden's win in the state amid unsubstantiated claims of voter fraud.

I am asking for everyone at the U.S. Capitol to remain peaceful. No violence! Remember, WE are the Party of Law & Order – respect the Law and our great men and women in Blue. Thank you!

Please support our Capitol Police and Law Enforcement. They are truly on the side of our Country. Stay peaceful!

This is an atrocious assault on our democracy. It is un-American and it needs to stop now. Glad to know members of our delegation are reporting they are safe.

Arizona representatives Debbie Lesko and David Schweikert both tweeted that they are safe.

Arizona representatives Greg Stanton and Ruben Gallego are both safe according to their offices.

UPDATE @RepGregStanton is safe, per his chief of staff. pic.twitter.com/xkM0kuH06d

Arizona Senators Mark Kelly and Kyrsten Sinema are both safe, according to their offices.

The U.S. Capitol was placed into lockdown after protestors breached the building.