Trump railed against the media, criticized Arizona's senators and hinted at an Arpaio pardon in a largely off-script speech before protesters and police clashed outside the event.

PHOENIX - Police deployed pepper spray and flash bangs on protesters outside the Phoenix Convention Center following a rally for President Donald Trump. Police said protesters threw items at them, leading to the escalation, but nobody was treated for injuries related to the protest.

Trump took the stage at his campaign rally at the Phoenix Convention Center around 7 p.m., speaking for nearly an hour and a half.

He shared a populist message, saying he wanted to support all Americans and railed against the press for its coverage of his reaction to recent racist violence in Charlottesville.

He also predicted that former Maricopa County Sheriff Joe Arpaio would be just fine after his conviction for refusing to stop racial profiling against a judge's order. But he did not announce a pardon for Arpaio Tuesday night.

Hundreds of people gathered downtown, whether to attend the event in support of the president or to protest against him.

Two of the arrests were for assault on officers, one was for criminal damage and a fourth was on an unrelated warrant.

Phoenix PD is still investigating and will make a complete incident report later.

In total, 56 people, including two officers, were treated for heat-related illness. Twelve were taken to hospitals.

Much of the scene between protesters and police has cleared out in downtown Phoenix about an hour and a half after President Trump finished speaking.

12 News cameras captured a woman being handcuffed by police outside the Phoenix Convention Center after police told protesters they needed to leave the area.

A protestor is in handcuffs after a scuffle on the corner of 3rd street and Washington. A lot of yelling. #12News pic.twitter.com/fMvsjs7Q1m

Police and fire officials have not reported any arrests or injuries yet.

Police are beginning to outnumber protesters outside the Phoenix Convention Center after the rally for President Trump. There are fewer explosions of flash bangs and pepper balls than earlier, and while protesters are still in the area, tempers appear to have cooled some.

Police starting to outnumber civilians on the corner or Washington and 3rd street. The crowd dispersing. #12News pic.twitter.com/OqEimHbVWb

Police are marching protesters up 2nd Street away from the convention center, continuing to deploy flash bangs and tear gas just outside the 12 News studio on 2nd and Van Buren streets.

Phoenix Police Chief Jeri Williams tweeted that she was proud of officers and the community for their action tonight.

Proud of the PPD officers, the community and all who are assisting tonight.

A police helicopter is flying overhead downtown, telling those in the area to disperse and go home. A small group with weapons was seen near 2nd and Adams streets. It's not clear if they were protesters or supporters of Trump, or if they had done anything violent.

The presidential motorcade arrived back at the Montelucia for the evening.

Loud bangs rang out after police deployed flash bangs outside the Phoenix Convention Center. Police said protesters threw bottles and rocks at police in the area. A police spokesperson said officers used pepper balls in hopes of dispersing the crowd.

Police asked media to encourage their audience to leave the area.

Police have deployed tear gas on protesters outside the Phoenix Convention Center. It's not clear yet what led to the use of tear gas devices.

Trump is wrapping up his speech with American optimism, saying America can build and become anything. "Freedom will prevail, our values will endure," he said, finishing with one final "make America great again."

The president is leaning on Democrats to help him in Congress to work together on policy.

Trump said he may get the U.S. out of the North American Free Trade Agreement, or at least renegotiate the agreement. He reminded attendees that he pulled the U.S. out of the Paris Climate Accord, which he said hurt America and helped other countries. Earlier he said he was working to expand clean coal plants.

PHOTOS: Inside the Phoenix Trump rally 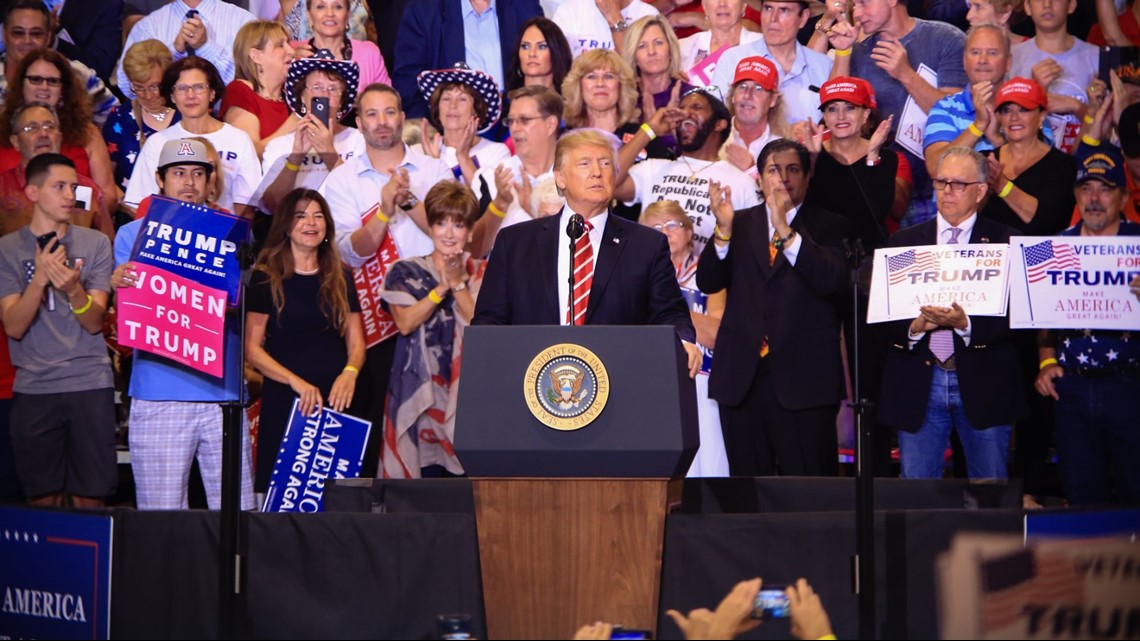 A group of protesters has begun marching from the Phoenix Convention Center toward the Arizona State Capitol several blocks away.

Trump lauded Arizona Gov. Doug Ducey, who greeted him after he landed at Sky Harbor but did not attend Tuesday night's event, saying he would need to oversee security.

He shouted out Reps. Paul Gosar and Andy Biggs, who are big supporters of his. He did not mention Kelli Ward, a former state senator who supports him and has mimicked much of his bombastic rhetoric.

The president said he and his administration were working to improve VA coverage for veterans, adding that they were working for the right to fire anyone who treats a veteran poorly.

Trump goes off on both Arizona senators without mentioning them by name, complaining about Sen. John McCain's vote that kept the Senate from approving the "skinny repeal" of the Affordable Care Act. He also called the state's "other senator," Jeff Flake "weak" on crime and borders.

He implored attendees to speak to McCain on the vote.

The president says Democrats have been presenting no ideas, just obstruction, adding that their vision for America is socialism and open borders.

Trump says the Senate must get rid of the 60-vote requirement, saying Republicans will be able to get much more done with a 51-vote simple majority.

Fire officials now say 48 people have been treated for heat-related illness around the rally, two of whom were transported to a local hospital.

Trump has made his first reference to the border wall that was such a central part of his campaign in 2016. He said experts told him how important the wall is, but Democrats don't want to see it done.

Trump said the wall will help stop drugs from coming across the border with Mexico.

The president has pivoted to a message of border security, referencing the gang MS-13 and saying his administration was cracking down on illegal immigration and the crime he says is associated with it.

Trump made his first reference to former Maricopa County Sheriff Joe Arpaio, who was a campaign supporter, asking if people in the room liked the former Phoenix-area sheriff.

He said he thought Arpaio "would be just fine," though he added that he would not announce a pardon for the former sheriff Tuesday night.

Trump said does not believe the media does not like the United States. He said it is the worst when it goes after his supporters, adding that he thought the media in attendance would turn off their cameras rather than allow him to share his message on their airwaves.

The president continued to speak about what he believed to be unfair coverage of his reaction to Charlottesville, saying he called out neo-Nazis and white supremacists but the press complained that he didn't do so fast enough.

NOW President of United States is 20 min into speech. Half of it airing grievances with media.... and still going. #12News

President Trump chided a protester who made his way into the convention center along with protesters outside.

Trump went after the media, saying news coverage of his reaction to the racism and violence in Charlottesville two weekends ago was dishonest. The crowd booed at what he called the "damned dishonest" media before saying he condemned white supremacists in the strongest terms.

He did so while reading from what appeared to be a script of his speech after the violence in Virginia.

President's version of speeches after Charlottesville did not include actual comments that incited criticism from even GOP senators. #12News

The first few minutes of Trump's speech were filled with messages of unity and populism, calling Americans part of a team.

President Trump said the Secret Service had told him that there "aren't too many people protesting" outside his rally.

President Donald Trump has taken the stage at the Phoenix Convention Center. He walked out to "I'm Proud To Be An American."

Vice President Mike Pence took the stage and gave a short speech before introducing the president.

Christian evangelist Franklin Graham read a prayer for unity. Graham is the son of Billy Graham, one of the nation's first televangelists.

Author and pro-life activist Alveda King, the granddaughter of Martin Luther King, Jr., took the stage to read a prayer and sing a portion of the hymn "How Great Thou Art."

Ben Carson, a Republican primary opponent of Trump's in the 2016 election, took the stage. Carson is a Cabinet member in the Trump administration as the Secretary of Housing and Urban Development.

The rally at the Phoenix Convention Center has begun and the presidential motorcade is set to leave the Omni Montelucia to head toward downtown.

Phoenix fire officials said they have treated 26 people for heat-related symptoms outside the rally.

Protesters are making their voices heard outside the Phoenix Convention Center, where President Donald Trump is set to speak in just over an hour.

Protestors are chanting "Donald Trump has got to go" as rally attendees head inside the venue #12News pic.twitter.com/lUpgKtvEMD

Inside the convention center, Trump supporters have filed in, awaiting the 6 p.m. start of the rally program.

The crowd outside the Phoenix Convention Center is growing. Some are waiting to get in and others are making their displeasure heard, but they're all out in the heat.

This will give you an idea of the size of the line to get into the #TrumpinPhx event. This is a timelapse of a quarter of it. #12News pic.twitter.com/N7nn2pthkt

The three left in a limo together from the airport, according to a government spokesperson.

Arizona Gov. Doug Ducey, who has said he will not be at the rally, welcomed Pence to Phoenix.

It's not clear what path President Trump will take to downtown Phoenix. He arrived almost an hour ahead of schedule.

His campaign, which has paid for and set up the rally, has not given a list of speakers yet.