Missed the State of the State speech? Here are five takeaways from the governor's annual address. 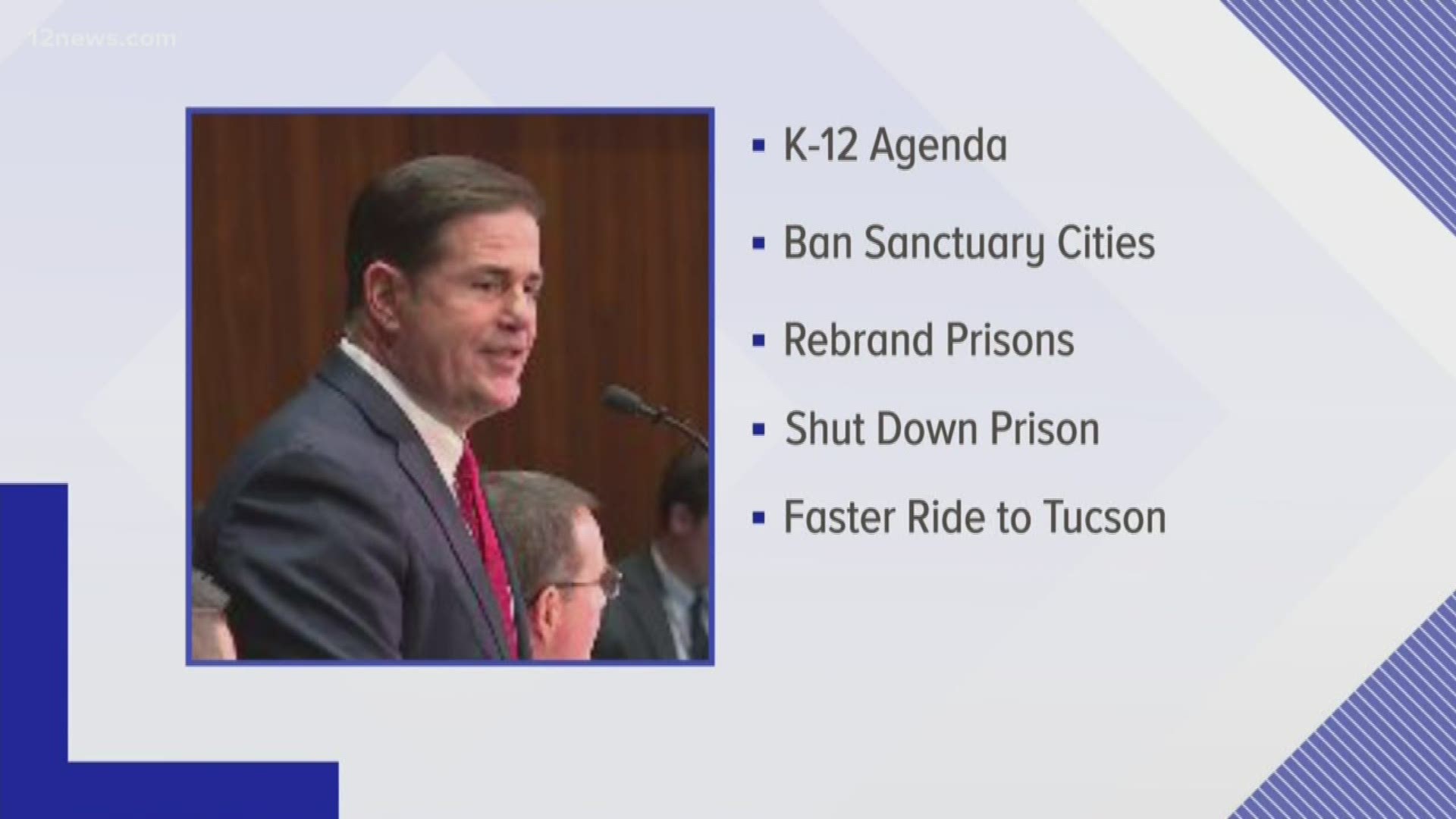 PHOENIX — Gov. Doug Ducey delivered his sixth "State of the State" speech Monday to a joint session of the Legislature, marking the official opening of the session.

The speech tells Arizonans what the governor wants to do this year. Here are some takeaways for a speech whose hashtag was #TheArizonaWay:

The governor checked off several plans for K-12 education, none of them as ambitious as his 20x2020 plan two years ago that gives teachers 20 percent raises over three years.

That plan - which wasn’t in that year’s State of the State speech - hands out the final raise next June. It’s unclear what comes next for the governor, but just three hours before he delivered his speech, a coalition of education groups announced a proposed statewide ballot initiative to raise $940 million a year for K-12 schools by boosting income taxes on high earners.

The governor’s wish list for the year ahead includes:
-Providing more funding on an ongoing basis for schools to hire counselors and police as school resource officers.
-Covering all costs for low-income students to take the Advanced Placement test.
-Give schools money and support to follow “Project Rocket,” a turnaround program created by Valley school superintendents to boost schools’ performance.
-Create a “Civics Celebration Day” in Arizona schools to honor retired U.S. Supreme Court Justice Sandra Day O’Connor and the civics education she has championed. The day would be Jan. 31, marking O’Connor’s swearing in as the nation’s first female justice. High school students are required to get 60 percent on a U.S. citizenship test to graduate. The bar would be raised to 70 percent, and middle-school students would get incentives to take the test.

On the heels of the City of Tucson’s overwhelming rejection last November of becoming a sanctuary city, the governor wants to put a ban in state law.

He’s calling for the Legislature to refer to the November ballot a referendum allowing all voters to decide whether sanctuary cities should be legal in Arizona. The Tucson measure failed because voters recognized that under Arizona’s SB 1070, sanctuary cities were already illegal, even though they aren’t specifically outlawed.

“This November, let’s give all Arizona voters the opportunity to say yes to the rule of law and no to sanctuary cities,” the governor said.

Republican State Rep. TJ Shope of Coolidge will lead the campaign, according to the governor’s office.

Arizona’s troubled prison system will get a rebranding: The Department of Corrections will be known as the “Department of Corrections, Rehabilitation and Re-Entry.” It puts the emphasis on preparing inmates for life after prison. The governor has not plans for sentencing reform, which advocates say would stem the flow of inmates.

The governors wants to shutdown the 2,000 inmate prison at Florence and move the inmates to other prisons or jails - state-run, privately owned or county jails.

The 100-year-old prison needs $300 million worth of upgrades, according to the governor's office.

Florence houses inmates from minimum to maximum security. It is also home to the state Death Row and death chamber. Death Row inmates would be moved, but the death chamber would not, according to the governor’s office.

SPEED UP PHOENIX TO TUCSON

The governor likes to put new infrastructure in his State of the State speech. This year he’s calling for a new eight-lane I-10 bridge over the Gila River, between Phoenix and Tucson, to accelerate the highway’s expansion to three lanes in both directions. The current bridge is about 60 years old. The $78 million cost would be borne by the state and the feds.

The governor’s office couldn’t explain why he was asking the feds alone to build a new bridge over the dangerous Tonto Creek, rather than having the state do it.

The governor wants to require all insurers to cover mental health care.

“Here you can brew beer, churn ice cream, and make an honest living. Now, all we need is Uber and Lyft back at Sky Harbor.”

The governor’s speech, at 5,541 words, was the longest of his six State of the State speeches.

On Friday, the governor will follow up by releasing his proposed budget, telling us how much he wants to spend this year and on what, fleshing out the details of many of the proposals in his State of the State.

This is a boom time for Arizona. The state is flush with cash. There’s a $1 billion ‘rainy day’ fund to cushion the state from a recession, as well as a projected $750 million surplus. It's a stark turnaround from the governor's first "State of the State" in 2015, when he warned of a projected billion-dollar deficit.

Just because there’s a surplus doesn’t mean it will be spent. The governor has warned what he calls "the spending lobby" not to expect big-ticket expenditures. The rainy day fund is an untouchable. That doesn’t mean he won’t call for tax cuts (see below).

The political backdrop for the governor's speech and the new session is an election year in which Republican lawmakers are playing defense to hold on to their slim majorities in both chambers of the Legislature. That gives Republicans an incentive to pass legislation now that wouldn’t be approved by a future Democratic majority.