During a Senate hearing on the armed services' efforts to prevent sexual assaults, Arizona Sen. Martha McSally disclosed she was raped while in the Air Force. 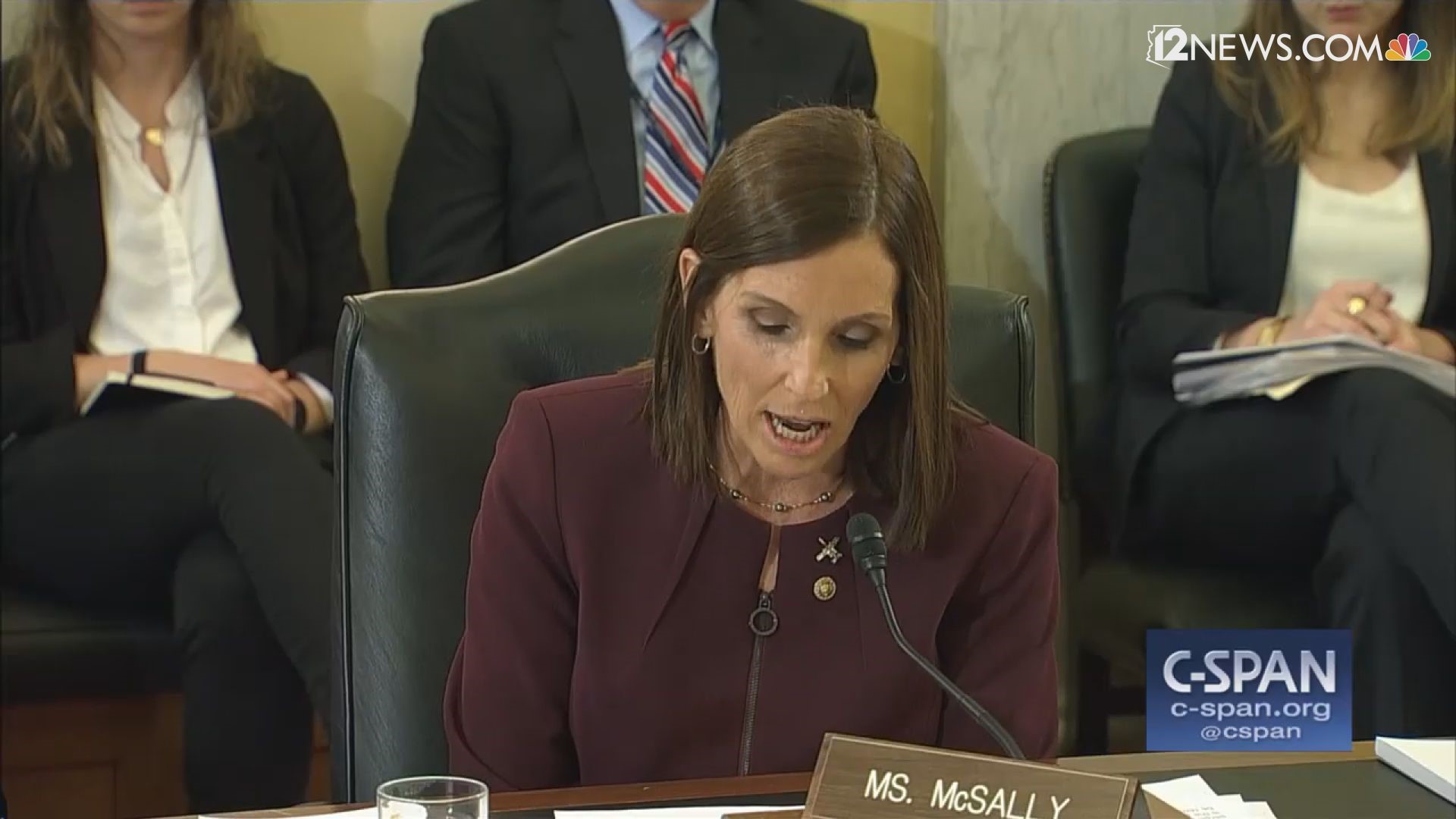 PHOENIX — Arizona Sen. Martha McSally revealed at a Senate hearing Wednesday that she was raped by a superior officer during her time in the Air Force.

McSally, a 26-year military veteran, was the American first female fighter pilot to fly in combat. She said at the time of the assault, she did not report it because she didn't feel supported by the system.

"I felt the need to let some people know I too was a survivor," McSally said at the hearing Wednesday.

I too want to thank Senator Gillibrand for her advocacy for women in uniform and her passion for stopping the crime of sexual assault in our military.

This is also a passion of mine for many reasons, and I think I bring a unique and important perspective. My drive to fight against sexual assault in the ranks is not from the outside looking in. It is deeply personal.

First, for two years, I was honored to be a fighter squadron commander in the United States Air Force. Command is the most impactful duty one can have directly on the lives of servicemen and women—and their families. I was greatly privileged to prepare and then lead my amazing Airmen in combat, which is the apex responsibility of any warrior leader.

Military commanders are placed in a position of authority and responsibility like none other in civilian life. They are not like CEOs, managers, or any other supervisor.

Commanders have a moral responsibility to ensure readiness of their units, which, yes, includes warfighting skills, but demands the commander cultivates and protects and enriches a culture of teamwork, respect, and honor.

Conduct—any conduct--that degrades this readiness doesn’t just harm individuals in the ranks, it harms the mission and places at risk the security of our country. Commanders also have a covenant with the men and women under their command—the one percent who volunteer to serve in uniform. They are asked to follow lawful orders that could risk their lives for the mission. In return, it is the commander’s responsibility to surround their people with a climate of integrity, discipline, and excellence.

During my 26-years in uniform, I witnessed so many weaknesses in the processes involving sexual assault prevention, investigation, and adjudication. It motivated me to make recommendations to Air Force leaders, shaped my approach as a commander, and informed my advocacy for change while I remained in the military and since I have been in Congress.

We have come a long way to stop military sexual assault but we still have a long way to go. When I first entered the Air Force Academy in the 9th class with women, sexual harassment and assault were prevalent but victims mostly suffered in silence. It took many years and too many lives ruined, but thanks to the bravery of some survivors like those on our first panel today, significant change has happened.

I am so inspired by the many survivors who found the strength to share their stories, report their assaults, and demand accountability, justice, and change. It is because of you that a light has been shined on this silent epidemic and so many improvements have been made—including more than 100 legislative actions over the last decade—on all aspects of military sexual assault.

So, like you, I also am a military sexual assault survivor, but unlike so many brave survivors, I didn’t report being sexually assaulted. Like so many women and men, I didn’t trust the system at the time. I blamed myself. I was ashamed and confused. I thought I was strong but felt powerless. The perpetrators abused their position of power in profound ways. In one case I was preyed upon and raped by a superior officer.

I stayed silent for many years, but later in my career, as the military grappled with the scandals, and their wholly inadequate responses, I felt the need to let some people know I too was a survivor. I was horrified at how my attempt to share generally my experiences was handled. I almost separated from the Air Force at 18 years of service over my despair. Like many victims, I felt like the system was raping me all over again.

But I didn’t quit. I decided to stay and continue to serve and fight and lead. To be a voice from within the ranks for women--and then in the House and now the Senate.

So, this is personal for me too—but it’s personal from two perspectives--as a commander who led my Airmen into combat and as a survivor of rape and betrayal.

I share the disgust of the failures of the military system and many commanders who failed in their responsibilities. But it is for this very reason that we must allow--we must demand--that commanders stay at the center of the solution and live up to the moral and legal responsibilities that come with being a commander. We must fix those distortions in the culture of our military that permit sexual harm towards women and, yes, some men as well.

We must educate, select, and further educate commanders who want to do the right thing but who are naive to the realities of sexual assault. We must ensure all commanders are trained and empowered to take legal action, prosecute fairly, and rid perpetrators from our ranks. And if the commander is the problem or fails in his or her duties, they must be removed and held harshly accountable.

We cannot command change from the outside alone—it must be deployed within—it must be built, constantly maintained, and expertly managed by commanders who are themselves educated, conditioned and given the tools to ensure what you survived—and what I survived—happens to no warrior under their command.

To that end, I very strongly believe that the commander must not be removed from the decision making responsibility of preventing, detecting, and prosecuting military sexual assault.

We are survivors together, and I am honored to be here and use my voice and unique experience to work on this mission to stop military sexual assault for good.