The clash between protesters and police resulted in five arrests and several people, including officers, being treated for injuries. 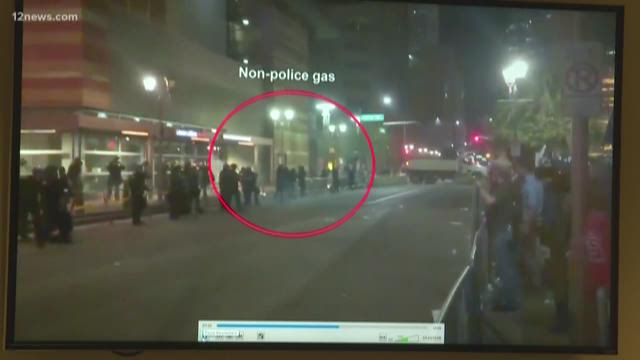 The Phoenix Police Department released an internal report Monday on officers' actions the August night of a rally for President Donald Trump and the heated protest outside.

The report admits there was a lack of communication from police to protesters.

More than 880 officers were deployed during the event, and everything seemed to be going well for most of the day. But it's what happened at the end of the night that necessitated the report.

Police in tactical gear fired pepper balls and stun grenades, filling the air with smoke as officers engaged with protesters.

The report maintains that it was a small number of ANTIFA (Anti-Fascist) group members who incited the chaos, which lasted for more than a half hour after the rally was finished.

The clash between protesters and police resulted in five arrests and several people, including officers, being treated for injuries.

Chief Jeri Williams says Phoenix PD has had several community listening meetings since the event. She believes those meetings and the internal review will help next time a major event comes to Phoenix.