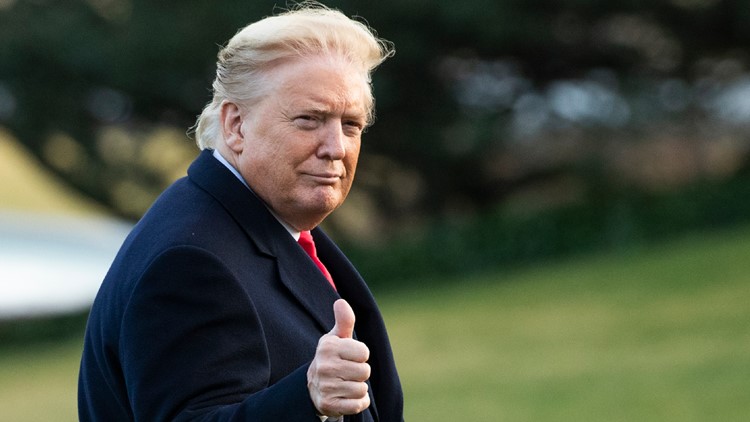 Photo by: AP Photo/Manuel Balce Ceneta
President Donald Trump gestures as he arrives back to the White House, Friday, Feb. 7, 2020, in Washington, from a trip in Charlotte, N.C.

President Trump says photo of him is 'photoshopped'

WASHINGTON — Everyone has an unflattering picture taken of them every once in a while, though one spreading across the internet in memes and otherwise features President Donald Trump.

The original picture, taken by photographer William Moon, shows Trump walking outside to the White House during a very windy day Friday, according to an unverified Twitter account called White House Photos.

It shows the president's hair blowing in the wind, with a tan line on his face. BuzzFeed News reports it isn't known whether the contrast in coloring is a tan line, poor makeup application or a result of some other sort of doctoring to the picture.

However, Moon tweeted another photo. It's the same as the original picture, only in black and white.

Moon said the "picture was never photoshopped, but used the Apple smartphone's photo app to adjust the color of the picture."

Trump retweeted a since-deleted tweet from another account, weighing into this latest internet back-and-forth: "More Fake News. This was photoshopped, obviously, but the wind was strong and the hair looks good? Anything to demean!"

"Photoshop" as a verb means "to alter (a digital image)...," so Trump might be onto something.

Vox says Moon is "a mysterious figure," perhaps an enthusiast of the president who attends open press events at the White House, meaning he is not affiliated with the White House or is a member of the White House News Photographers Association.

An official press photo taken by Associated Press photographer shows similar coloring on the president's face, though perhaps not as dramatic.

President Donald Trump gestures as reporters ask questions upon arrival to the White House, Friday, Feb. 7, 2020, in Washington, as he returns from a trip to Charlotte, N.C.
AP Photo/Manuel Balce Ceneta

RELATED: Aide who testified against President Trump escorted out of White House