Limited tickets will be available to the public for a memorial service in Phoenix Thursday. McCain's body will lie in state at the Arizona and U.S. capitols. 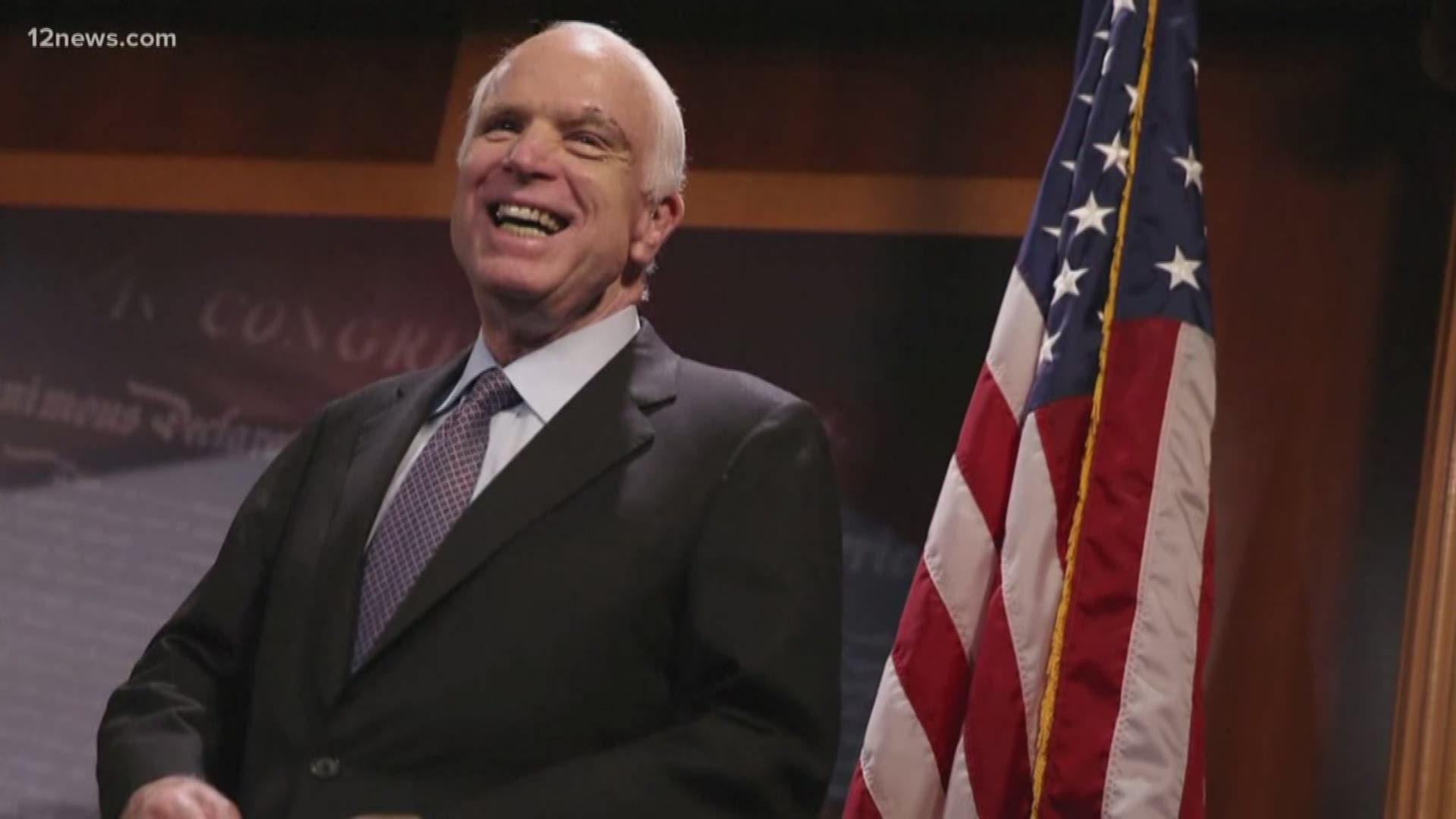 A series of services and ceremonies honoring the life of Arizona Senator John McCain will kick off Wednesday in Phoenix.

McCain died Saturday at his family’s ranch near Sedona after battling an aggressive form of brain cancer for over a year. Wednesday would have been McCain’s 82nd birthday.

Over the course of five days, McCain’s body will travel from the Arizona Capitol to Washington, D.C., to Annapolis, Maryland, where he will be buried at the U.S. Naval Academy.

McCain’s body will lie in state for 24 hours at the old Arizona State Capitol building. There will be a public viewing.

"John McCain is Arizona," Ducey wrote in a tweet, "and we will honor his life every way we can."

A private ceremony will take place at 10 a.m. Wednesday inside the rotunda. The date would've been Sen. McCain's 82nd birthday. In attendance will be the McCain family, Gov. Ducey, former Arizona Sen. Jon Kyl and current Sen. Jeff Flake.

Only two other people have had the same honor in the last 40 years. Arizona State Senator Marilyn Jarrett lied in state in 2006 and Olympic gold medalist Jesse Owens in 1980.

The memorial service will begin at 10 a.m. Sen. McCain's daughter, Bridget, and son, Andy, will be conducting readings. McCain's longtime friend Grant Woods along with Larry Fitzgerald will give tributes.

Vice President Joe Biden will speak at the Phoenix memorial before flying back to D.C. for the lie in state ceremony.

There will also be a bagpiper, according to family spokesperson Rick Davis.

Limited tickets will be available to the public for the service. You can request up to two tickets online here.

Anyone who receives a ticket will be notified by email.

People are expected to line the eight-mile route between the two locations.

The McCain family attended North Phoenix Baptist and lived across the street from the church.

Following the service, McCain will leave Arizona for the last time, departing from Goldwater Air National Guard Base at Phoenix Sky Harbor at 12:30 p.m.

McCain’s body will lie in state in the U.S. Capitol Rotunda beginning Friday.

McCain will become just the 31st person to have received the honor of lying in state in the Capitol Rotunda since Henry Clay became the first in 1852. McCain will join an illustrious list that includes Abraham Lincoln, John F. Kennedy and Rosa Parks.

A formal ceremony will take place honoring his life at approximately 11 a.m. ET (8 a.m. MST). McCain's Congress colleagues will present a wreath both from the Senate and another from the House of Representatives.

At the conclusion of that ceremony, the public will be able to pay their respects to the late senator throughout the afternoon and evening.

“The nation mourns the loss of a great American patriot, a statesman who put his country first and enriched this institution through many years of service,” McConnell said in a statement confirming the ceremony.

The family will gathered at the Capitol where they will escort Sen. McCain's body along Pennsylvania Avenue to the Vietnam War Memorial, where Cindy McCain and the family will lay a wreath.

A service will be held for McCain at the Washington National Cathedral in D.C., on Saturday. The service will start at 10 a.m. ET (7 a.m. MST). Family, friends, national and international dignitaries are expected to attend.

The first tribute will be done by Sen. McCain's daughter, Meghan. His son, Jimmy, will read a poem. Others who will read tributes are former Sen. Joe Libermam, Dr. Henry Kissinger as well as president George W. Bush and Barack Obama.

Davis said "Danny Boy" will be performed as a musical interlude at the specific request of Sen. McCain.

The McCain family will travel with John McCain to his final resting place.

A private memorial service will take place at the U.S. Naval Academy Chapel in Annapolis prior to a private burial service at the academy ceremony.

Four generations of McCains have attended the Naval Academy: his grandfather, his father, Sen. McCain, and his son Jack, who currently serves in the Navy.

McCain will be laid to rest next to his classmate and lifelong friend, Admiral Chuck Larson. Larson died in 2014 of pneumonia after two years of treatment for leukemia.

The events at the Naval Academy will not be open to the public or press.