PHOENIX - Sen. John McCain on Friday cut off questions from reporters about a $1 million donation by the government of Saudi Arabia to a non-profit that bears McCain's name. 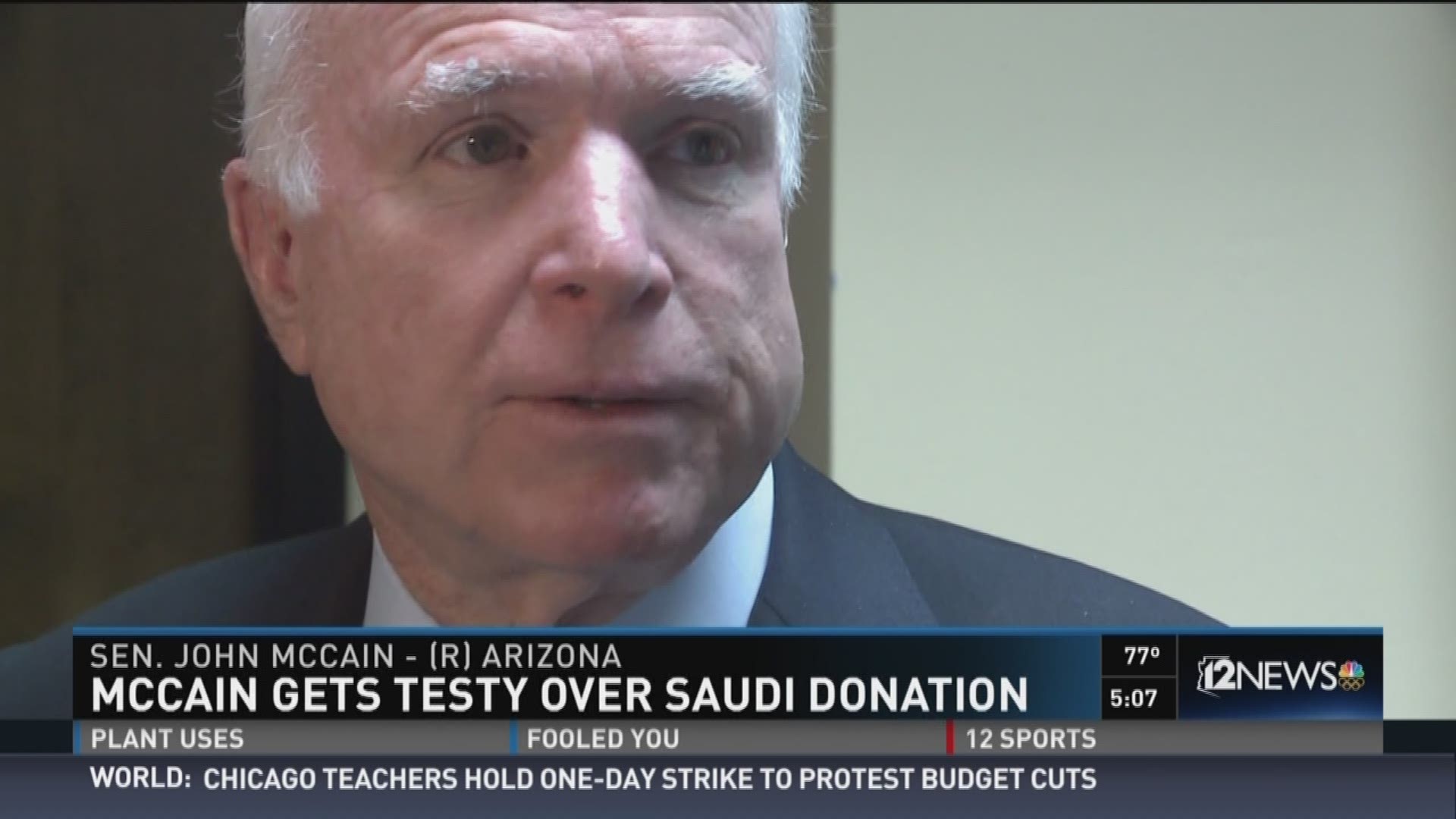 PHOENIX - Sen. John McCain on Friday cut off questions from reporters about a $1 million donation by the government of Saudi Arabia to a non-profit that bears McCain's name.

McCain denied that he had any link to the McCain Institute for International Leadership, which was founded in 2012 at Arizona State University with a $9 million gift of leftover cash from McCain's 2008 presidential campaign.

"I'm proud that the institute is named after me, but I have nothing to do with it -- except that they use my name just as the Goldwater Institute uses Goldwater's name," McCain after a town hall at a Honeywell plant in Phoenix.

The Saudi donation was first reported Thursday by Bloomberg Politics.

McCain laughed off comparisons to the Clinton Foundation, whose fundraising from foreign governments has put Democratic presidential candidate Hillary Clinton in an awkward position.

"Look at what the Clinton institute has raised in the form of money," McCain said. "I mean, come on, there's no connection there."

McCain cut off questions about the donations after a few minutes.

IRS documents for the McCain Institute Foundation show the foundation's books are kept by Carla Eudy, a longtime McCain fundraiser.

One of the institute's marquee events, the Sedona Forum, features McCain in conversation with global leaders in the world of politics, business and entertainment. This year's forum is April 8 through 10 in Sedona.

"He may not have any kind of direct control over the institute, but it's something that he is connected to at the hip."

Foreign governments are barred from making campaign donations to U.S. politicians.The government of Saudi Arabia spends more than any other country on lobbying the federal government, Holman said, and now it's funneling cash to non-profits connected to officeholders.

"Anyone who's going to chip in a million dollars or more to the McCain Institute is going to get John McCain's ear," Holman said.

As chairman of the powerful Senate Armed Services Committee and a leading voice on national security issues, McCain has carved out policy positions that are in sync with Saudi Arabia's, Holman said.

"They want to see the U.S. involved in Syria. They want to see our negotiations with Iran to come to an end," he said. "This is in Saudi Arabia's interest to try to influence John McCain."

Former State Sen. Kelli Ward, one of McCain's opponents in the August Republican primary, said she was concerned about Saudi influence on McCain.

"I hate to see foreign governments playing in our political process," Ward said in an interview.

"With all the turmoil in the Middle East, I don't want any touch of impropriety that could come along with that." Ward said.