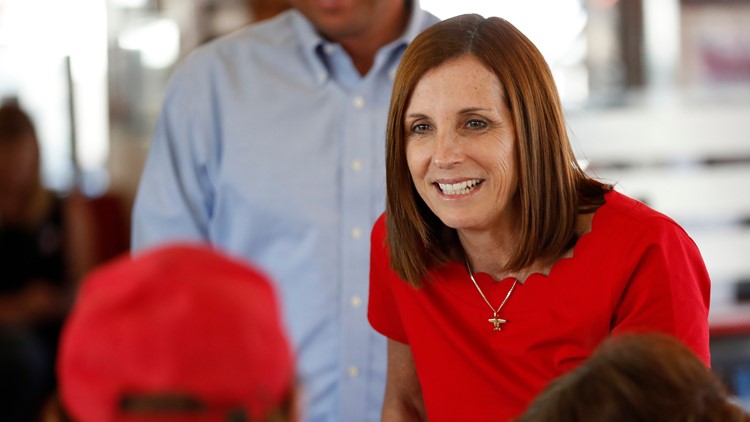 Incumbents like McSally have tolerated a budget deficit that's approaching $1 trillion and failed to stop drugs from crossing the Mexican border, he said.

Democrats are aggressively targeting McSally in a race they must win if they hope to regain control of the Senate.

McSally, a former Air Force combat pilot, was appointed to the seat after losing to Democrat Kyrsten Sinema in last year's race to replace retiring Republican Jeff Flake. Her advisers have blamed her hard-fought primary as an important factor in her loss, which made Sinema the first Democrat to win an Arizona Senate seat in three decades.

PREVIOUSLY: McSally's team confirms senator running for re-election in 2020, filed back in January

He has said he opposes any restrictions on gun rights, supports President Donald Trump's proposed border wall and wondered why President Barack Obama's health care law has not been repealed.

GOP forces, including Trump and Ward, who is now chairman of the Arizona Republican Party, have lined up firmly behind McSally in hopes of avoiding a serious primary challenger after her experience last year.

RELATED: Joe Arpaio announces he will make another run for Maricopa County sheriff

McSally and Ward hugged and struck a tone of unity Wednesday following a previously scheduled event for the Trump campaign in Scottsdale.

"I'm endorsed by President Trump, we are unified as a Republican Party," McSally said. "We are working together and we're going to make sure that we hold this seat up and down the ticket for Republicans for our future, and that's our focus."

In that race, she ran to the right, embraced President Donald Trump and spent millions of dollars to win the primary against Kelli Ward and Joe Arpaio, who presented themselves as the race's true conservatives who would most forcefully stand up for Trump. Sinema, who faced no serious opposition in the Democratic primary, embraced McCain's legacy and focused on building a profile as an independent-minded moderate.

"Senator McSally has been a champion for Arizona - working to secure the border and lower taxes for hard-working families," NRSC spokeswoman Joanna Rodriguez said in a statement. "She's received President Trump's endorsement because she's the most conservative candidate on the ballot and we look forward to her winning next fall."

Trump tweeted his support in June.

"A brave former fighter jet pilot and warrior, Senator Martha McSally of Arizona has done an outstanding job in D.C., and is fully supportive of our agenda - she is with us all the way," he wrote. "Martha is strong on Crime and Borders, the 2nd Amendment, and loves our Military and Vets. She has my Complete and Total Endorsement!"

After the 2018 loss, McSally's campaign released a four-page memo blaming a cash disadvantage versus Sinema, the contested primary and a short window before the general election. Mail ballots went out about six weeks after Arizona's late-August primary.

With the GOP's institutional forces lined up behind McSally, it remains to be seen how big of a threat McCarthy may pose. Unlike her 2018 race, McSally now enjoys the advantage of being an incumbent.

McCarthy said he'll put his own money into the race but declined to say how much.

The Republican nominee is likely to face Kelly, a gun control advocate and the husband of former Democratic Rep. Gabby Giffords, who was shot while meeting with constituents outside a Tucson, Arizona, supermarket in 2011.

He is closely following Sinema's centrist strategy and appears to face a relatively uncontested path to the Democratic nomination.

RELATED: Suburban voters are pressuring Republicans to act on guns