Interfaith letter is addressed to 'Arizona residents.' But it comes as a campaign seeks to put Mesa's new civil rights ordinance to a citywide vote. 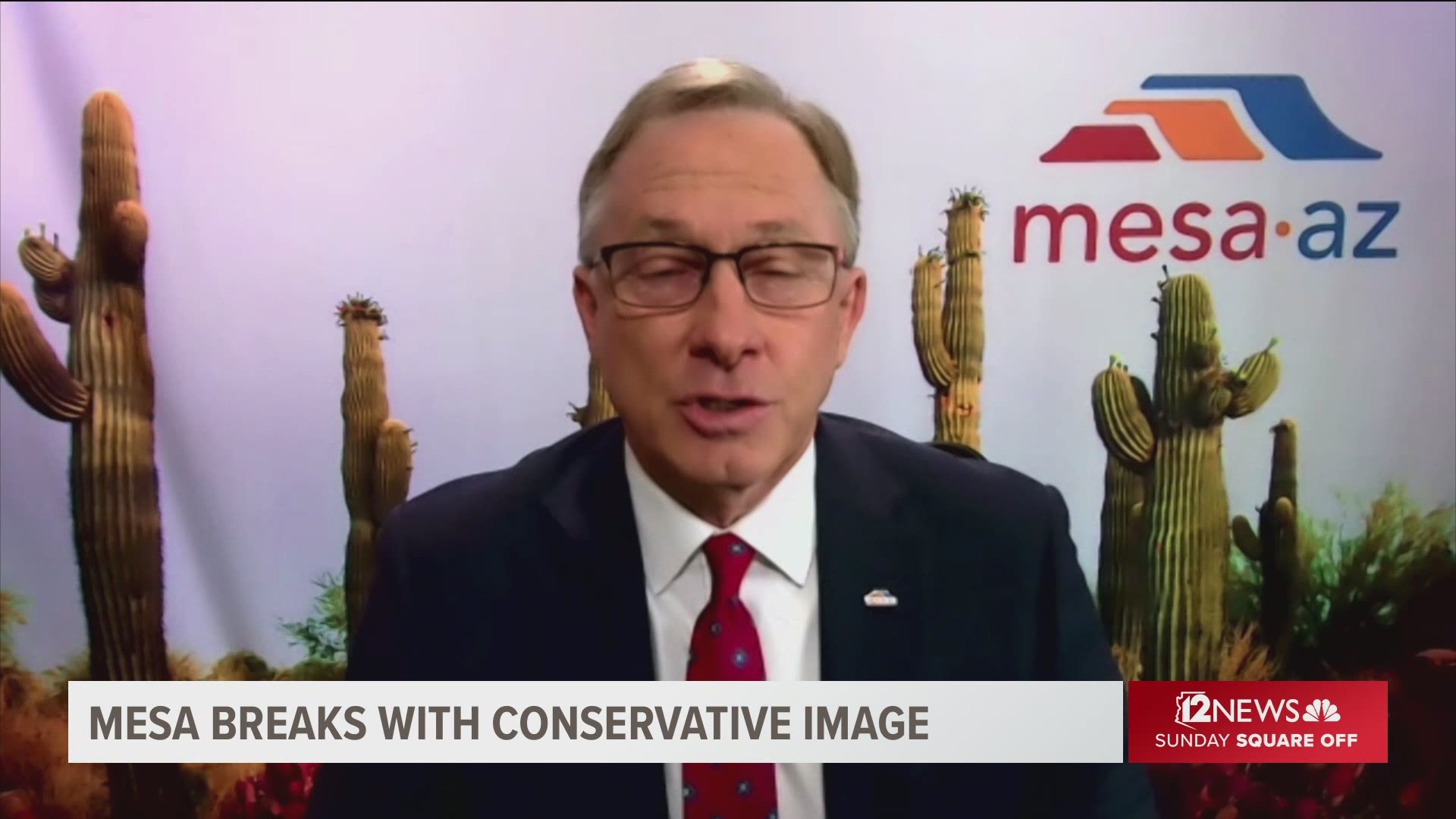 PHOENIX — Editor's note: The video above is an interview with Mesa Mayor John Giles from "Sunday Square Off" on March 14.

A regional leader of the Church of Jesus Christ of Latter-day Saints and Democratic U.S. Sen. Kyrsten Sinema have signed an interfaith letter affirming their support for both LGBTQ civil rights and the right to religious freedom.

The letter, released on Saturday, is addressed to "Arizona residents," but it comes as the city of Mesa faces a campaign to toss out an LGBTQ civil rights ordinance passed earlier this month.

The month-long campaign has just 10 days left to collect the more than 13,000 signatures needed to put the ordinance to a citywide vote.

Elder Dale Willis, a regional leader of the LDS Church, said, "LGBTQ rights and religious freedom do not have to be in conflict."

“Simply put, protecting people from discrimination is about treating others as we want to be treated," Willis said in a prepared statement. "...we can come together to protect all people and unify our community on what has for too long been a divisive issue."

Sinema, the first openly bisexual member of the U.S. Senate, supported the federal Equality Act after she was elected in 2018. The House-approved, non-discrimination legislation now awaits action in a divided Senate, where Sinema could hold a key to passage.

Willis' statement carries both religious and political significance in historically conservative Mesa, home to a large number of Mormon families and the faith's first temple in Arizona.

Within days of Mesa City Council voting 5-2 in favor of the ordinance protecting LGBTQ civil rights, Arizona's leading opponent of those rights, Cathi Herrod of the Center for Arizona Policy, called on residents to sign petitions for a citywide vote to kill the ordinance.

JUST IN Days after Mesa City Council approved city's 1st #LGBT anti-discrimination ordinance, @cathiherrod is pushing for a citywide referendum to toss it out. pic.twitter.com/QXDb7JTotD

Herrod and other faith-based opponents mobilized against a similar non-discrimination ordinance in Phoenix. That battle was decided by a narrowly crafted Arizona Supreme Court decision that allowed a wedding-invitation business to skirt the ordinance.

In a "Sunday Square Off" interview that aired March 14, Mesa Mayor John Giles said legal questions surrounding the civil rights ordinance had been cleared up over the last several years.

"All that's left now to fight against this ordinance is throwing up fear that is not justified by reality," Giles said.

Mesa was the seventh Arizona city to protect LGBTQ civil rights, but the first one led by a Republican mayor.

The LDS church supported statewide non-discrimination legislation in Utah, known as the Utah Compromise, in 2015. But that bill didn't address whether businesses can deny services to LGBT customers.

The Mesa ordinance does provide those protections at businesses with five or more employees. It excludes religious schools and organizations “when furthering (the) organization’s purpose.”

The interfaith letter was posted on the website of One Community:

An Open Letter to Arizona Residents:

As citizens and leaders in the community, we write in support of non-discrimination ordinances that protect all people, including LGBTQ people, from discrimination in employment, housing and public accommodations, while also protecting important religious rights.

No one should be denied these protections for being LGBTQ, and likewise religious persons and institutions should be protected in practicing their faith.

We are deeply concerned that the ongoing conflicts between religious liberty and LGBTQ rights are poisoning our civil discourse, eroding the free exercise of religion and preventing diverse people of good will from living together in respect and peace.

We hope that every level of government will apply these common values and core principles in a balanced approach with all stakeholders engaging in respectful dialogue. LGBTQ rights and religious freedom do not have to be in conflict. Instead, we can come together to protect all people and unify our community on what has for too long been a divisive issue.

We respectfully urge all Arizona residents to join in support of public policy that provides protections for LGBTQ persons as well as people and institutions of faith.

The Right Rev. Jennifer A. Reddall, VI Bishop of the Episcopal Diocese of Arizona