In an exclusive interview with 12 News, Merissa Hamilton shares her reaction to a conversation about adults having sex with children. She recorded Stringer on livestream saying he didn't want to 'demonize' child sex-trafficking. 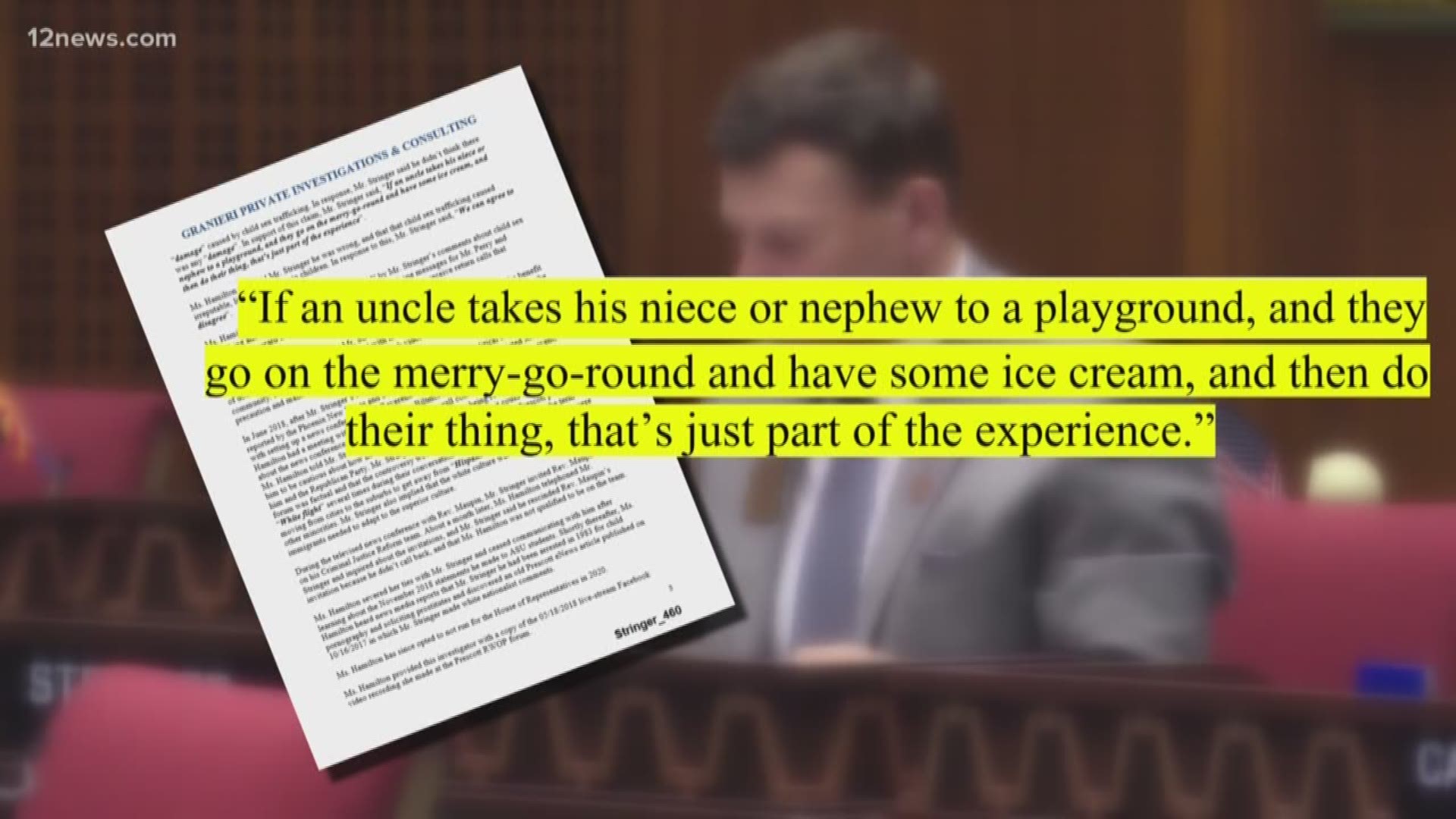 Former Republican State Rep. David Stringer quit the House of Representatives in disgrace last week, but he hasn't quite left the building.

Documents and videos released this week by the House Ethics Committee revealed Stringer's disturbing views about adults having sex with children.

In one of those videos, Stringer chuckles about 15-year-old prostitutes. He says he doesn’t like to “demonize” child sex-trafficking.

“In my gut, (I was) feeling creeped out by the statements,” Merissa Hamilton, who recorded Stringer’s comments, told 12 News in an exclusive interview.

House Ethics Committee investigators uncovered documents showing Stringer was charged 35 years ago in Maryland with paying teenage boys for sex. Documents show he was sentenced to five years of probation and ordered to a clinic that treats sexual disorders. But his criminal record was later expunged.

Hamilton said she was a survivor of domestic violence and sexual assault, and is now an advocate for children caught up in sex-trafficking.

“The charges that had been made against Rep. Stringer were very concerning. They hit close to home for me,” Hamilton said.

Putting aside concerns about potential lawsuits and retaliation, Hamilton said, she told her story to investigators.

“I wanted to make sure that the investigators had all the information,” said Hamilton, who spoke to House investigators the week before Stringer resigned.

Lawyers had told her she needed an attorney to ensure she wasn’t sued for speaking to investigators.

Hamilton said she met the 71-year-old Stringer early last year as she was considering a run for the Legislature in 2020. She had left the Libertarian Party, and says people directed her to Stringer because he was a “pro-liberty politician.”

Stringer invited her to attend a Republican event in Prescott, in May 2018, where a U.S. Customs and Border Patrol agent was speaking.

Hamilton livestreamed the event on her Facebook page. Her conversation with Stringer about child sex-trafficking was captured on the livestream audio.

Hamilton said she had suggested to Stringer that he ask the speaker about child sex-trafficking at the border.

“When I asked him to ask that question, he stuttered a little bit at first, and then he said, ‘I don’t like to demonize that,’” according to Hamilton.

“He used the words ‘demagoguery,’ giving it a negative connotation. That raised a lot of red flags. I was very shocked.”

She said she was so disturbed by the conversation that she continued talking to Stringer about his opinions as they walked to her car in the parking lot.

Hamilton asked Stringer to clarify whether he thought there was no "damage" caused by child sex-trafficking. She said he didn't think there was any damage. And then, according to Hamilton, Stringer said this:

“I looked back in horror and said, ‘No, it's absolutely determined this is dangerous to children,” she recalled in our interview.

I asked Hamilton if she had transcribed Stringer’s comments. She said she hadn’t.

“It was just something that was so shocking, it just stayed with me and stayed in my head,” she said.

Yet Hamilton continued to associate with Stringer.

A month later, in June 2018, she was with Stringer as he defending his racist statements during a news conference at Lolo’s Chicken and Waffles in south Phoenix.

“I had had conflicted feelings about David Stringer the whole time that I knew him,” she said. “It was about giving him the benefit of the doubt, considering how highly respected he was in the community."

Hamilton says she cut her ties to Stringer a short time later.

Earlier this year, Phoenix New Times reported about Stringer’s alleged sex offenses in Maryland dating to 1983. That report ultimately triggered the House ethics investigation that would end with Stringer’s resignation.

“When I saw that story, my heart sunk,” Hamilton said.

Does she think justice was done in the Stringer case?

“Essentially, he resigned, he declares his innocence and an investigation happened,” she said.  “I don't know. I'm not sure if that's considered justice or not.”

The lesson for Hamilton comes in the need for legal protections for advocates or victims who speak out against abusers.

David Stringer responded to Hamilton’s comments in a statement on his Facebook page:

“I can't account for the statements (Merissa Hamilton) has attributed to me. But for the record, I have never minimized the problem of sex trafficking or specifically child sex-trafficking across our southern border. As an attorney, I've handled child sex cases, representing both victims and the accused. They are serious cases. I regard Ms. Hamilton's views as sincere but a little over the top.”

David Stringer
It has come to my attention that one of my former campaign supporters has jumped on the bandwagon denouncing me for things I have never said and don't believe. Merissa Hamilton, the former 2016...