President-elect Joe Biden holds an over 11,000 vote lead over Trump with just 10,315 ballots left to count. 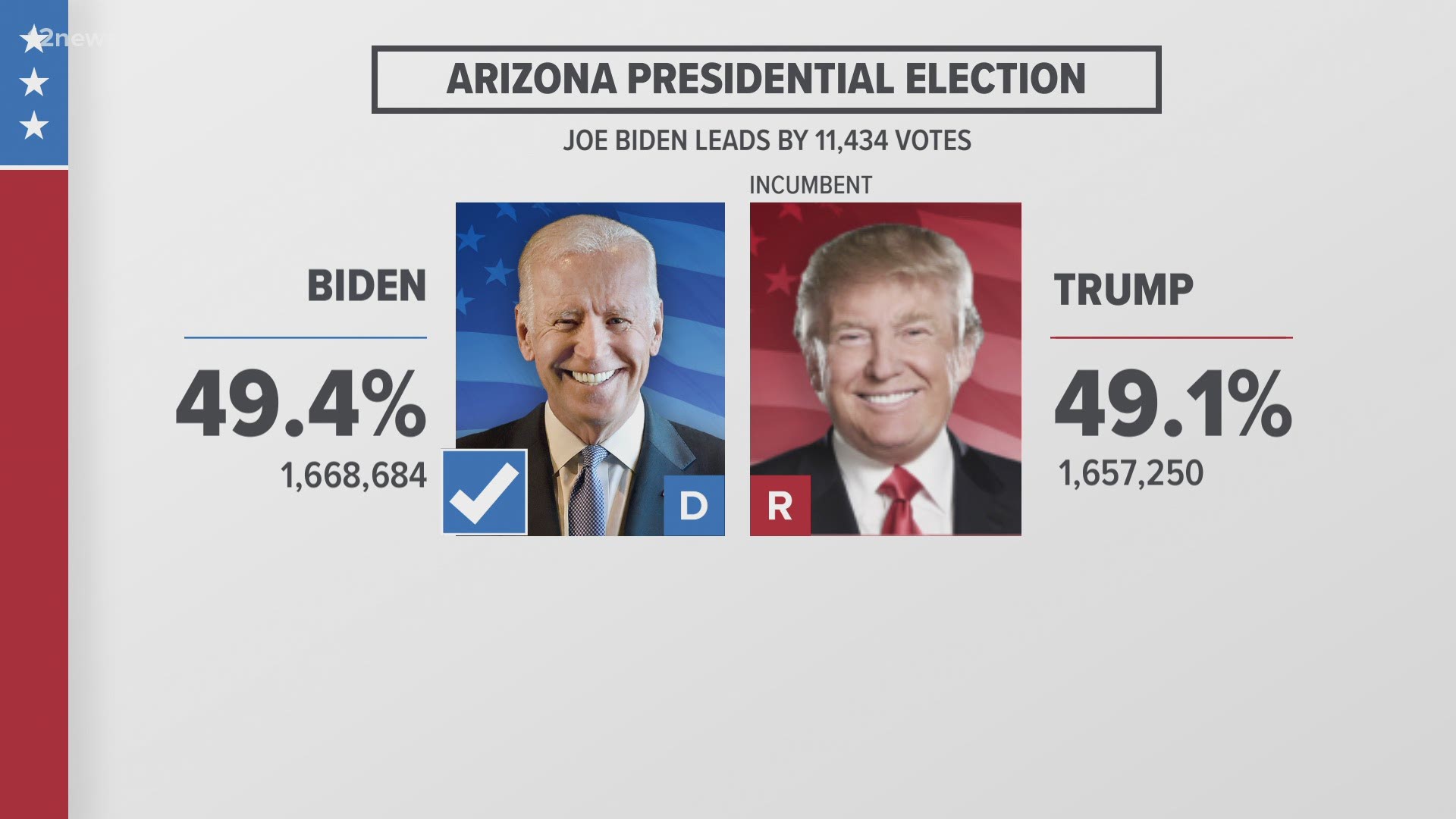 PHOENIX — Arizona's latest ballot count has mathematically eliminated President Donald Trump from winning the state, even as his campaign hotly contests the result of the presidential election.

President-elect Joe Biden holds an over 11,000 vote lead over Trump with just 10,315 ballots left to count in the Grand Canyon State as of Thursday night.

It's the first time Arizona has voted for a Democrat in a presidential election since 1996 and a stunning blow for the Republican base that's called the state a stronghold for decades.

The Associated Press declared Biden the winner of Arizona’s 11 electoral votes on Nov. 4, but the race unexpectedly tightened substantially as the ballots continued to be counted.

Gov. Doug Ducey and other Republican leaders contested the results. Meanwhile, scores of protestors gathered outside the Maricopa County elections office for days in protest – many holding signs supporting Trump while chanting “count every vote.”

No matter the outcome in Arizona, however, Biden has already won the 270 electoral college votes necessary to win the White House.

The Trump campaign has vehemently disputed the results in several battleground states and has made unsubstantiated calls of voter fraud.

The use of Sharpies on Arizona ballots became subject to nationwide scrutiny, even though Maricopa County announced weeks in advance that the markers would not cause issues.

Arizona Secretary of State Katie Hobbs says Maricopa County officials had demonstrated that overvoting had not caused votes to be thrown out and myths surrounding the use of Sharpies on ballots have been debunked.

Biden was declared the winner of the presidential race Saturday morning after flipping Pennsylvania.

Of the remaining uncalled state races, Trump holds a comfortable lead in North Carolina, but Biden is on the verge of flipping Georgia with a 14,000-ballot lead which is heading towards a recount.

While the results of the remaining state races won’t change the outcome, more electoral votes for Biden would strengthen his case if courts need to intervene.