'I am hopeful': Healthcare activist stricken by ALS takes on new set of Arizona senators after calling out Flake

Ady Barkan's confrontation with former senator on airplane went viral. He's leading a new mission to expand home care even as his body breaks down. 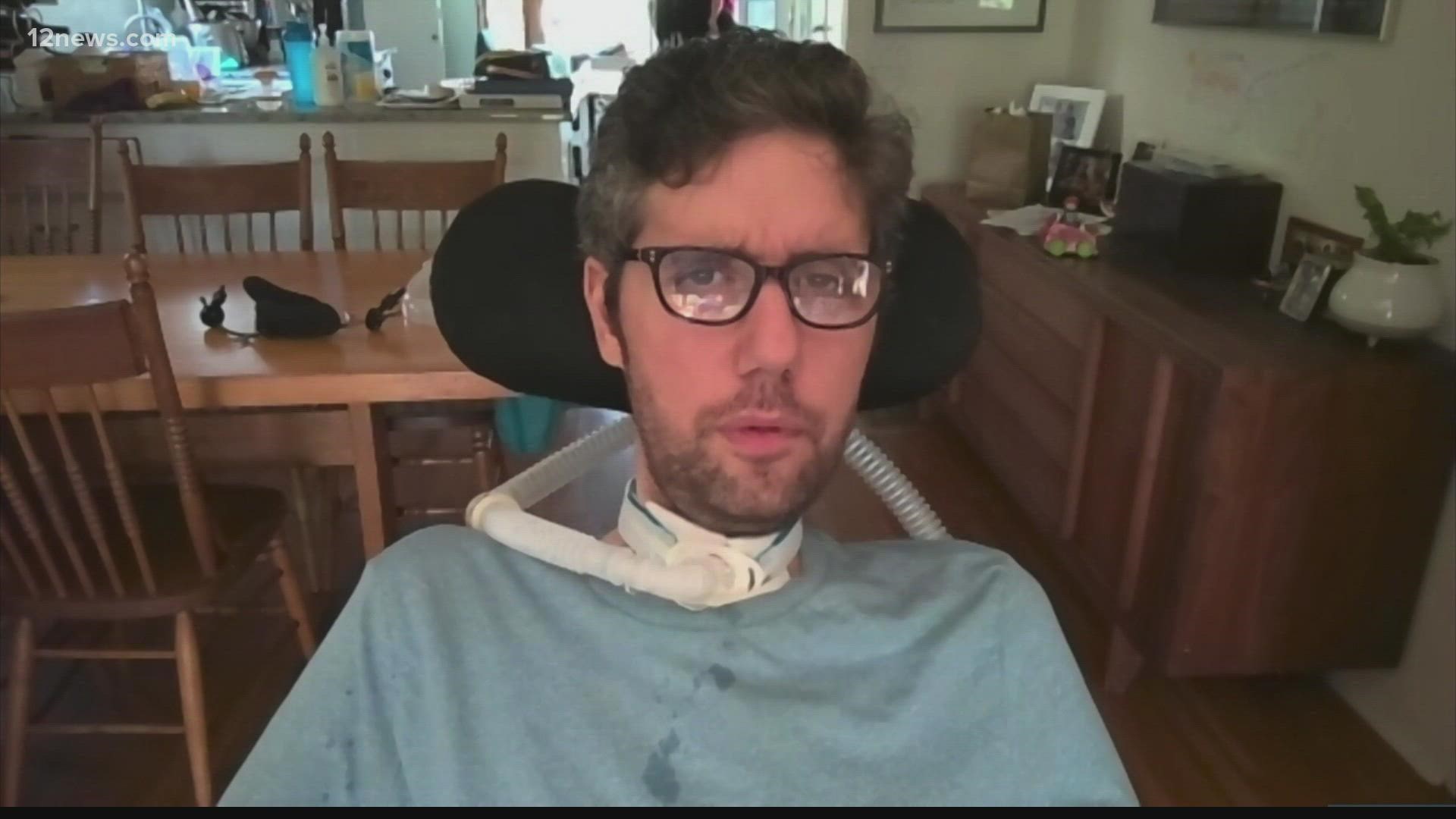 But the healthcare activist is still fighting and calling out Arizona senators.

You might recall Barkan's viral video four years ago when he confronted then-Sen. Jeff Flake on a plane.

"You can be an American hero, you really can, you're halfway there," Barkan told Flake.

Grand finale @AdyBarkan tells @JeffFlake this is his chance to be the American hero and #killthebill the #GOPTaxScam and help him live and save millions of Americans. #flakesonaplane pic.twitter.com/BObnURTu5w

Flake voted for the tax cut but said of Barkan: "I enjoyed the conversation, Ady. We won't always agree, by I admire your courage and knowledgeable advocacy."

I enjoyed the conversation, Ady. We won’t always agree, by I admire your courage and knowledgeable advocacy. https://t.co/rtaKegXvCU

At the time, Barkan was in the early stages of Lou Gehrig's Disease, the terminal, muscle-wasting illness also known as ALS.

Today, Barkan's body is paralyzed, he's on a ventilator around the clock, and he speaks with the aid of a computer voice.

But he's living up to the title of a new documentary about his progressive activism, "Not Going Quietly."

"I am hopeful because I get to wake up every day and work alongside great people who are working to realize a better world," Barkan said in an interview Wednesday from his California home.

"The heartbreak, the pain, the bleakness you may feel, use all of it to fuel your fight."

Barkan's new mission is to provide vulnerable Americans with the kind of home care he's receiving.

"My team of caregivers enables me to live at home surrounded by the deep love of my wife, Rachel, and our two young kids."

Barkan wants to make Medicaid's home care program available to the one million people on its waiting list.

"Without home care, I probably would need to be in a nursing home to stay alive," he said.

"To be honest, I don't know if that would be a quality of life I would be willing to tolerate.

"Every senior and disabled person in Arizona has the right to live safely and with dignity."

"Hundreds of thousands of lives are on the line," Barkan said.

Sinema has said several times that the $3.5 billion price tag on the House of Representatives legislation is too high.

But a spokesman for the senator said she would be involved in "good faith" discussions about the legislation's content.

Sinema has talked to the chairman of the U.S. Senate Special Committee on Aging and is aware he's planning to boost funding for home and community-based services, spokesman John LaBombard said via text message.

"As an Arizonan and a senator who has served on the Aging Committee, Kyrsten supports as a policy matter increasing home care services and strengthening support for family and professional caregivers," LaBombard said.

"We cannot yet comment on specific funding proposals until those are finalized and made available by the committees, and we have a chance to review those details."

A spokesman for Kelly, who is a member of the Aging Committee, provided this statement:

"Sen. Kelly has heard from Arizonans and on the Senate Aging Committee about the need to improve and expand home and community services for Arizona seniors and families. This is one priority under consideration through the budget process.

"As it moves forward, Sen. Kelly will evaluate it based on the needs of Arizonans and continue to push for policies that rebuild and grow our economy and create good-paying jobs for Arizonans, including critical supports like these."