President Donald Trump has been impeached by a vote of 232-197 in the House, with 10 Republicans voting with Democrats. 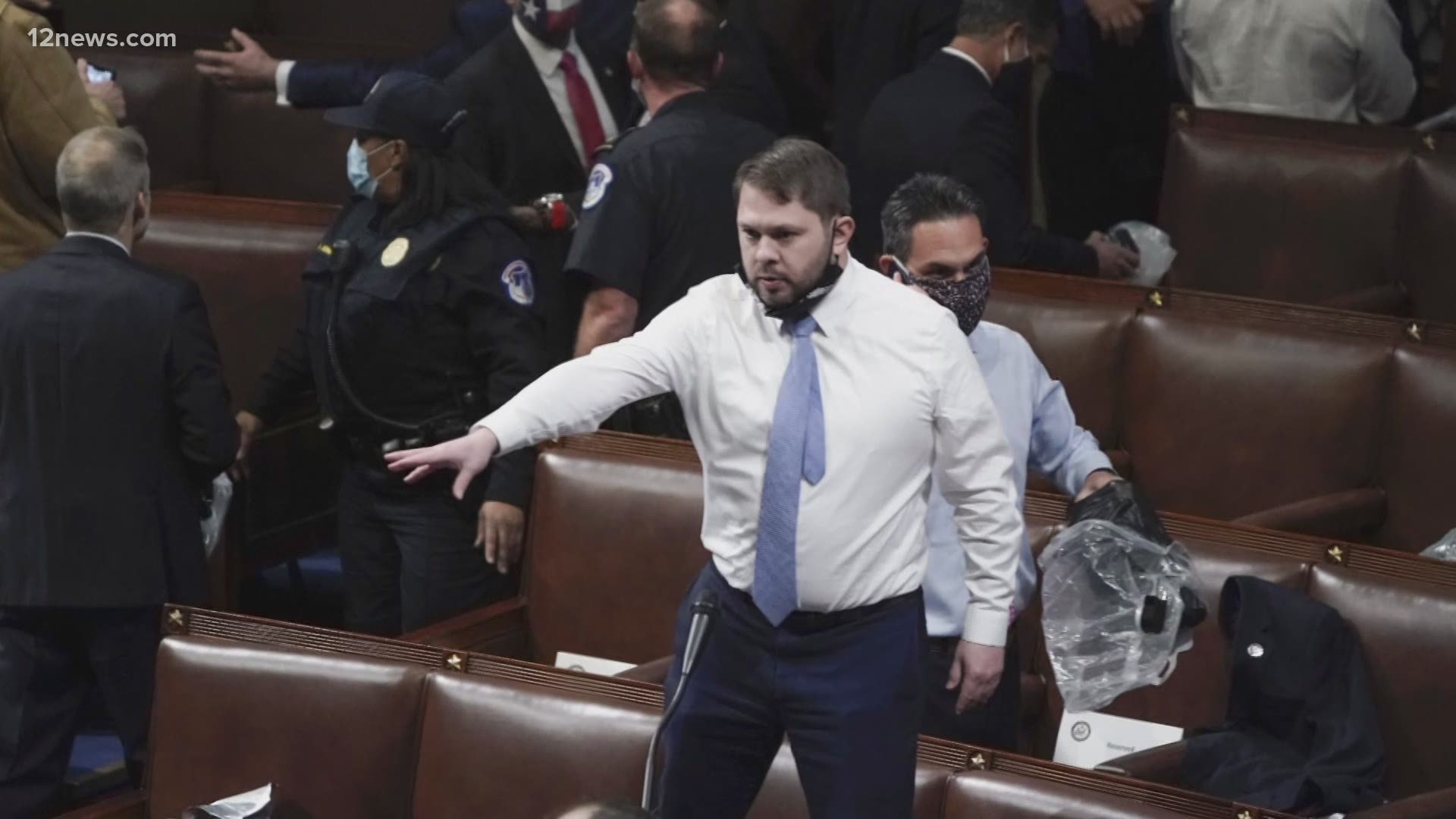 WASHINGTON — President Donald Trump has been impeached for a second time in a fast-moving House vote, just a week after he encouraged loyalists to “fight like hell” against election results and then a mob of supporters stormed the U.S. Capitol.

Trump becomes the only U.S. president twice impeached. In 2019 he was impeached over his dealings with Ukraine but was acquitted by the Senate in 2020. This time, Trump faces a single charge of “incitement of insurrection.”

In the 2019 House impeachment vote, the five Democrat representatives from Arizona voted to impeach while the four Republicans voted against impeachment.

The final vote was 232-197 in the House, with 10 Republicans voting with Democrats.

During the debate before the vote, House Speaker Nancy Pelosi asked Republicans and Democrats to “search their souls." Trump would be the first American president to be impeached twice.

Trump “must go,” Pelosi said. “He is a clear and present danger to the nation we all love.”

Actual removal seems unlikely before the Jan. 20 inauguration of President-elect Joe Biden. A spokesman for Senate Majority Leader Mitch McConnell said the Republican leader would not agree to bring the chamber back immediately, all but ensuring a Senate trial could not begin at least until Jan. 19.

Still, McConnell did not rule out voting to convict Trump in the event of a trial. In a note to his fellow Republican senators just before the House was to begin voting, he said he is undecided.

“While the press has been full of speculation, I have not made a final decision on how I will vote and I intend to listen to the legal arguments when they are presented to the Senate," McConnell wrote.

The stunning collapse of Trump's final days in office, against alarming warnings of more violence ahead by his followers, leaves the nation at an uneasy and unfamiliar juncture before Democrat Joe Biden is inaugurated Jan. 20.

The four-page impeachment resolution relies on Trump’s own incendiary rhetoric and the falsehoods he spread about Biden’s election victory, including at a White House rally on the day of the Jan. 6 attack on the Capitol, in building its case for high crimes and misdemeanors as demanded in the Constitution.

Trump took no responsibility for the riot, suggesting it was the drive to oust him rather than his actions around the bloody riot that was dividing the country.

RELATED: How the process for Trump's 2nd impeachment works

A Capitol police officer died from injuries suffered in the riot, and police shot and killed a woman during the siege. Three other people died in what authorities said were medical emergencies. Lawmakers had to scramble for safety and hide as rioters took control of the Capitol, delaying by hours the tally of Electoral College votes that was the last step in finalizing Biden's victory.

The outgoing president offered no condolences for those dead or injured, only saying, “I want no violence.”

At least five Republican lawmakers, including third-ranking House GOP leader Liz Cheney of Wyoming, were unswayed by the president's logic. The Republicans announced prior to Wednesday's proceedings they would vote to impeach Trump, cleaving the Republican leadership, and the party itself.

RELATED: VERIFY: Can Trump be impeached after leaving office? If so, what would be the point?

Senate Republican leader Mitch McConnell of Kentucky is said to be angry at Trump, and it's unclear how a Senate impeachment trial would play out. The New York Times reported that McConnell thinks Trump committed an impeachable offense and is glad Democrats are moving against him. Citing unidentified people familiar with McConnell's thinking, the Times reported McConnell believes moving against Trump will help the GOP forge a future independent of the divisive, chaotic president.

The president was said to be livid with perceived disloyalty from McConnell and Cheney, as calls mounted for her ouster. He was also deeply frustrated that he could not hit back with his shuttered Twitter account, the fear of which has kept most Republicans in line for years, according to White House officials and Republicans close to the West Wing who weren’t authorized to speak publicly about private conversations.

While some have questioned impeaching the president so close to the end of his term, there is precedent. In 1876, during the Ulysses Grant administration, War Secretary William Belknap was impeached by the House the day he resigned, and the Senate convened a trial months later. He was acquitted.