What is Arizona Prop 305? How will it affect Arizona schools?

On Nov. 6, Arizonans will vote "yes" or "no" on Proposition 305. Your vote all comes down to how you feel about the Empowerment Scholarship Accounts program. 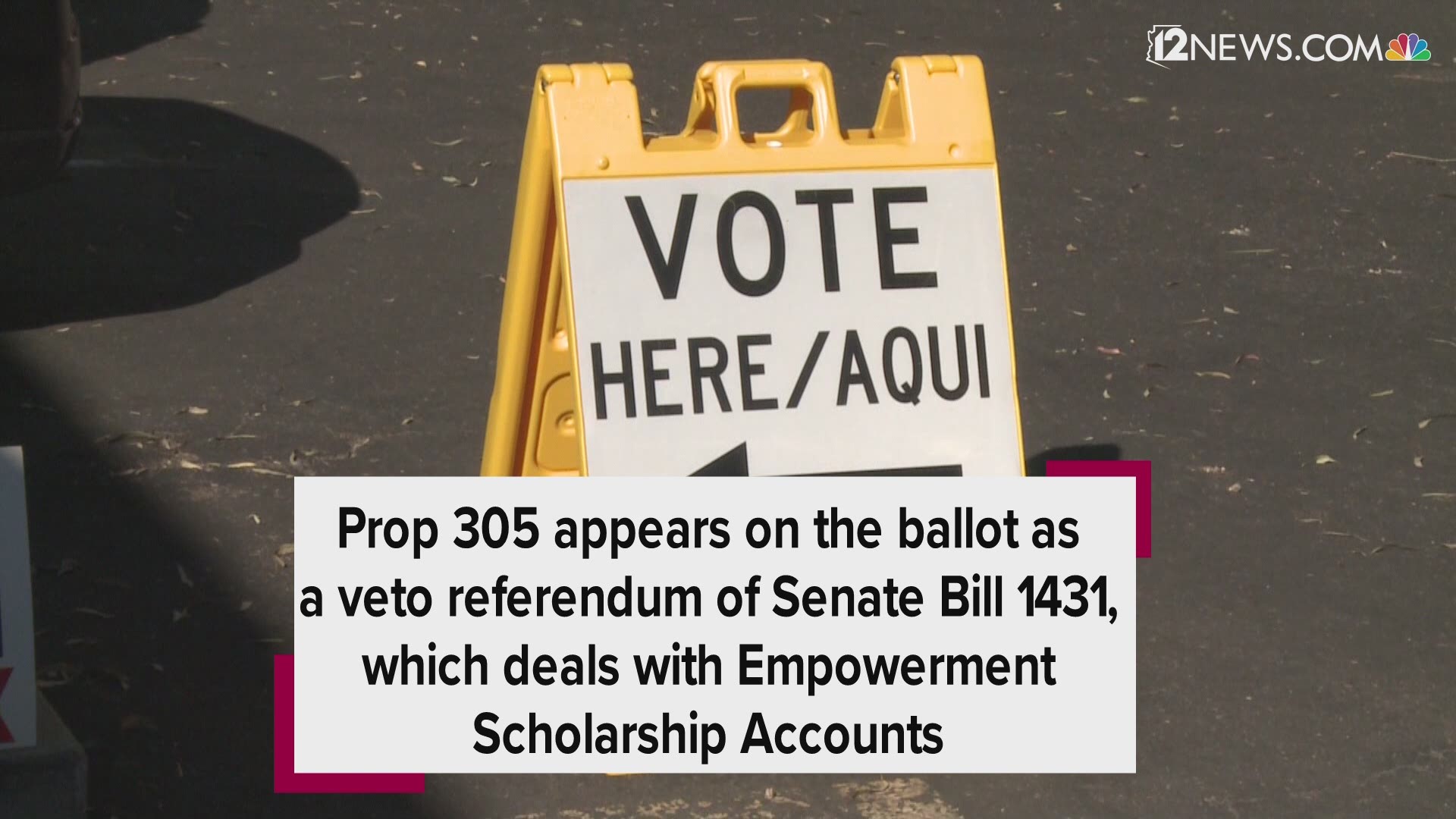 Come Nov. 6, Arizonans will vote for ballot initiatives including one that would expand the state's school voucher program.

Proposition 305 is a veto referendum, challenging Senate Bill 1431, meaning the people who got it on the ballot want a "no" vote on it. Save Our Schools Arizona collected enough signatures to add Prop 305 as a ballot measure, giving voters the option to vote "no" on it before SB 1431 would go into effect.

SB 1431 enacts an expansion of the state’s Empowerment Scholarship Accounts (ESAs) program to make all public school students eligible to apply for money that could be spent on private education, homeschooling, or other non-public education. That money could be used for tuition, books or other education-related costs. A "yes" on Prop 305 means, "Yes, I want SB 1431 to become a law."

Supporters of passing 305 say it helps parents make the best educational choices for their children, by providing an option to opt of public school. Those against it say it defunds public schools and uses public dollars for tuition at religious schools.

Educators and supporters of the Red for Ed movement have also accused the campaign of adopting their movement's branding to create a guise that those teachers are backing it.

All these factors make Prop 305 one of the most convoluted ballot measures on the ballot, so let's break it down.

What would Prop 305 do for Arizona?

Who are the supporters of Prop 305 and what are they saying?

These groups have submitted arguments for “yes” votes on Prop. 305 to the Arizona Secretary of State:

Republican Gov. Doug Ducey is also a "yes" vote on Prop 305. Supporters of the proposition are in favor of granting students public dollars to use to pay for non-public education, like religious or secular private schools. Supporters say this provides more educational options for Arizona students and their families.

Who are the opponents of Prop 305 and what are they saying?

These groups have submitted arguments for “no” votes on Prop. 305 to the Arizona Secretary of State:

Ducey's Democratic challenger David Garcia is also a "no" vote on Prop 305. People who oppose expanding the number of students who can receive public funding to use in non-public education are against 305. Those people are concerned that the ESA program will take money away from the public school system, canceling out recent re-investments in teacher pay or school funding that came from the Red for Ed movement.

Opponents argue that the expansion of ESA would take away the assistance it currently gives children with special needs.

What do I need to know about Prop 305 before I vote?

Numbers from the National Center for Education Statistics show that in 2014, only about 5 percent of Arizona's students were enrolled in private schools. That means well over the majority of Arizona children rely on the public school system. The Arizona Department of Education says that 1.1 million students attend publicly funded K-12 schools.

RELATED: Arizona election: What is Prop 127?