For Bloomberg to win Texas, who must win Iowa?

Bloomberg has the largest ground operation in Texas of any national Democratic candidate. 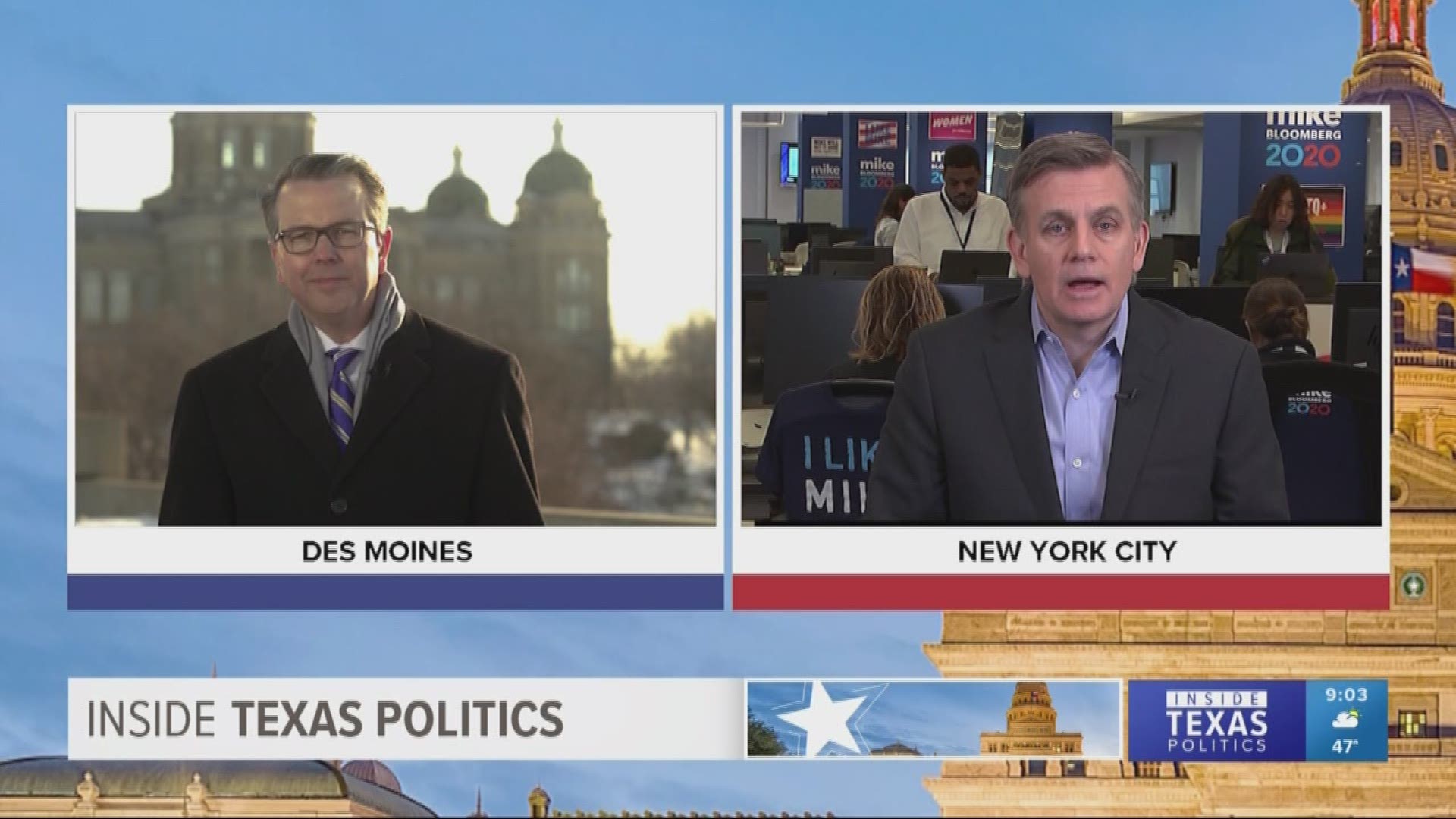 “I would expect the vice president to do very well. I expect him to win Iowa. He has campaigned for president in Iowa three times,” Sheekey added. “If he does not do well in Iowa, and we do not have a strong candidate coming out of the first four states, then that is really the reason Mike Bloomberg is running.”

On Friday, the Democratic National Committee changed its debate entry requirements, which created an opportunity for Bloomberg. For the next Democratic presidential debate, which happens later this month in Nevada, the DNC dropped its requirement that each candidate have a certain number of donors.

Bloomberg would have otherwise never qualified since he is self-funding his campaign and not accepting donations.

When WFAA asked if Bloomberg will debate in Nevada if he meets the required polling threshold, Sheekey said, “He sure will, and we expect that he will qualify.”

Bloomberg entered the presidential race in November. It was too late, Bloomberg told WFAA last month, to establish a viable campaign in Iowa since other Democrats had already been there for more than a year.

RELATED: Inside Texas Politics: Why Mike Bloomberg is skipping Iowa and focusing on Texas for presidential campaign

Instead, Bloomberg has poured money into advertising, staff and field offices in major Super Tuesday states like Texas and California. Bloomberg, a former mayor of New York City, is visiting Arizona, California and Detroit this week. He spent time in El Paso last week.

A Lyceum poll released last week showed Bernie Sanders and Joe Biden widened their leads in Texas. Biden scored 28%, Sanders was second with 26% and Warren placed third with 13%. But the poll showed Bloomberg had edged out Pete Buttigieg for fourth place. Bloomberg had 9% and Buttigieg had 6%.

“We love the Lyceum poll. We’ve only been out of the box about six weeks. We’ve now lapped all but the top three Democrats,” said Tim O’Brien, a senior advisor to Bloomberg, in an interview with WFAA last week.

Sheekey would not define what a win in Texas looks like.

“I think in Texas, they say go big or go home. I’m not looking for anything less than a win,” he explained.

Since November, Bloomberg has spent more than $200 million to fuel his campaign ascent. By contrast, President Trump’s re-election effort currently has $195 million cash on hand.

“We filed with the FEC [on Friday] what we spent in the first month, and I think it’s simply a down payment on what he’s committed to, which is running a 50-state campaign to involve every part of this country,” Sheekey continued.

While Bloomberg has not said how much he’ll spend to get elected, Sheekey said his boss is strategically involved in how it’s spent.

“I would like to say, listen, Mike has done well in life for a reason. I’d say he questions every nickel and makes sure that every dollar we spend is appropriate, but has never given me an upward limit on what we should spend or if it’s something we should do.”

Bloomberg has the largest ground operation in Texas of any national Democratic candidate. His campaign opened a state headquarters in Houston along with 18 field offices across Texas, with 130 staffers on the ground.

In addition, Bloomberg has already spent millions of dollars on advertising in Texas and plans to send out 2.5 million direct mail pieces in the coming days to Texas voters and other Super Tuesday states.

Inside Texas Politics: Why Mike Bloomberg is skipping Iowa and focusing on Texas for presidential campaign

On the campaign bus with Mike Bloomberg in Dallas: Here's what he had to say

Unemployment is low, but economy isn’t working for everyone, Bloomberg says ahead of Texas visit