Sinema vs. McSally: Arizona's Senate race could have national implications

The winner of the seat could determine which party controls the U.S. Senate. 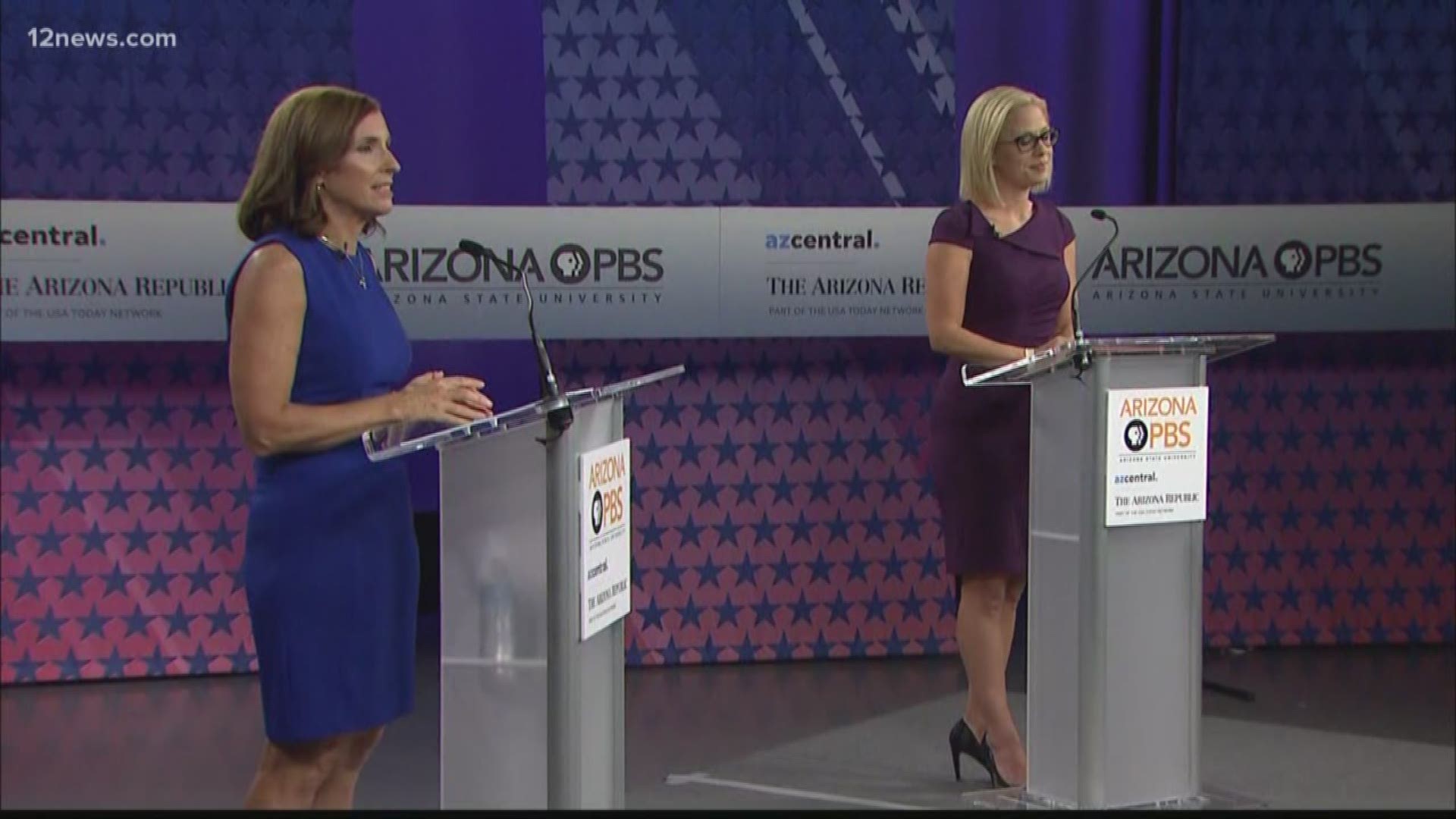 The race to replace Arizona Sen. Jeff Flake is an important one on the national stage; the winner of the seat could determine which party controls the Senate.

It’s the most expensive election in Arizona history—on track for $50 million in spending on TV ads—and polling shows Sinema and McSally are locked in a dead heat.

The winner will be the first woman to serve as U.S. senator for Arizona in the state’s 106-year history.

Here’s where each candidate stands on the big issues.

In the Arizona Senate debate Monday night on PBS, McSally and Sinema agreed the country’s healthcare system is in need of an overhaul, but they sparred over how best to protect Americans with pre-existing health conditions.

McSally argued that the Affordable Care Act model has increased insurance premiums more than 100 percent year to year. She also touted bipartisan legislation that she said would help stabilize the healthcare market.

Sinema responded that McSally’s “yes” vote on a bill to repeal and replace the Affordable Care Act last year would have removed protections for those with pre-existing conditions. Sinema was referring to the American Health Care Act that would have replaced ACA if the skinny repeal legislation had not died in the Senate. The AHCA would have required those with pre-existing conditions to be offered health insurance, but it also would have removed the ACA cap on how much could be charged, removing a major protection of the plan.

Sinema voted “no” on repealing ACA last year, but she has voiced her concern in the past about portions of the ACA she does not support. Sinema voted “no” on repealing ACA in 2013 as well, after which Sinema’s office sent out a press release that said the congresswoman believes ACA should be improved to contain rising costs rather than repealed completely.

McSally voted “yes” on the GOP tax-cut bill signed into law last year. During the debate, she claimed the bill increased federal revenue and decreased the unemployment rate, particularly for Hispanics and African-Americans.

Sinema voted “no” on the tax bill, saying she was concerned it would increase the deficit by $1.9 trillion and threaten spending for social security.

Sinema said she would approve funding for a border wall as long as it’s part of a “total solution,” for border security. Sinema co-sponsored a bill called the USA Act of 2018 in Congress, which would increase funding for “smart” border technology like night vision cameras and drones and provide a path to citizenship for DACA recipients.

McSally countered that Sinema voted “no” on a “compromise bill” last year that would have amended immigration law to establish a merit-based visa program, provide DACA recipients with a temporary legal status and appropriate funds for a border wall between the U.S. and Mexico.

After the controversial confirmation of Supreme Court Justice Brett Kavanaugh, each candidate was asked how she would have voted.

McSally said the contention surrounding Kavanaugh’s confirmation was a result of “the mob rule in Washington, D.C.,” and that Arizonans wanted him on the Supreme Court.

Sinema opposed the confirmation, saying, "The decision I would have made based on (Kavanaugh) lying under oath would have been to vote 'no.'"

A big issue in Kavanaugh's confirmation fight was the validity of Roe v. Wade, which affirmed a woman's constitutional right to have an abortion. There have been concerns that a conservative majority on the Supreme Court could threaten the ruling. The Senate candidates were asked where they stand on overturning Roe V. Wade.

While McSally said she is “pro-life,” she did not directly answer whether she would support overturning Roe v. Wade.

“I would support appointing justices that are looking independently at the Constitution and at the laws that we make, and that they will have a good decision-making process based on that,” McSally said.

Sinema emphasized her belief that the government should not interfere in a woman’s decision whether to have an abortion.

The president is loved by Arizona Republicans and hated by Democrats. Independents are cool to him.

President Trump will be campaigning for McSally in Mesa on Friday. McSally needs Trump to help her lock down Republican votes. However, two years ago, McSally wouldn’t even say if she’d vote for Trump.

Sinema, on the other hand, is going after Independents with a milder stance on Trump, saying that if he’s doing something good for Arizona, she’ll vote, “yes.”