The Attorney General's Office requested information about the use of Sharpies on ballots. Maricopa County elections officials have said that these votes will count. 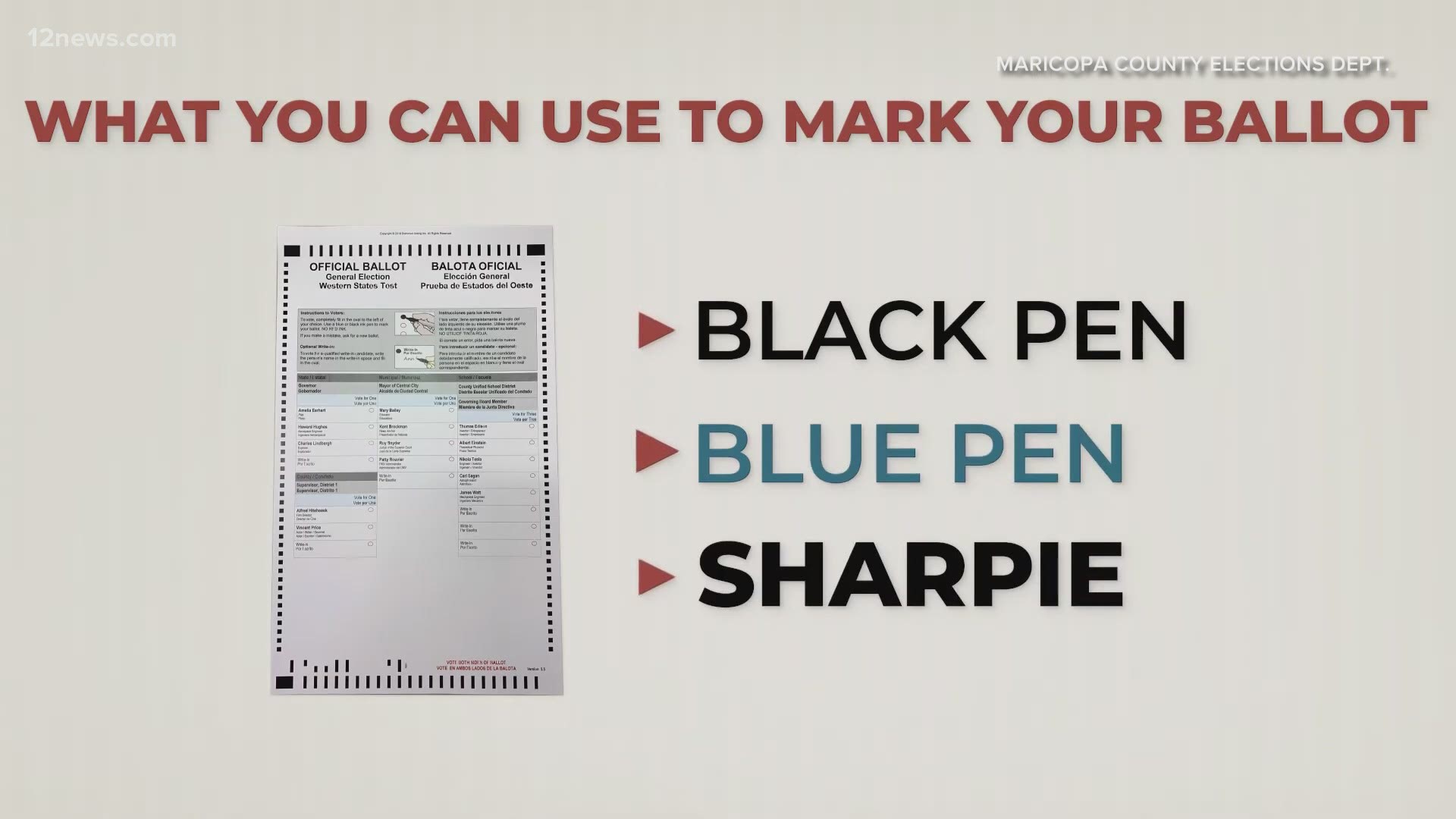 PHOENIX — The Arizona state elections director responded to the Attorney General's Office after it announced Wednesday the office would be looking into complaints about the use of Sharpie markers to mark ballots in Maricopa County.

The Attorney General's Office said it received "hundreds" of complaints from voters worried about ballots being counted if it they were filled out using Sharpie markers, a theory that has been widely debunked.

Elections officials in Maricopa County have said that there is no issue with a ballot filled out with a Sharpie. The ballot was designed so the front and back circles are offset. If the marker did bleed through the ballot, the votes would still be properly counted.

State Elections Director Sambo Dul backed the county election officials in a letter to the Attorney General's Office on Thursday.

"I am responding to your letter in an effort to help quickly put an end to these unfounded claims so that election officials can focus on completing the count," the letter said.

Dul explained in the letter the AG's questions were made with the "false assumption" that using Sharpies on ballots even causes them to be rejected, spoiled or canceled.

It went on to say if a ballot is damaged voters have an opportunity to get a new one.

"...this imagined controversy regarding the use of Sharpies has absolutely nothing to do with the cancellation of early ballots," the letter said.

The letter urged the Attorney General's Office to "join an ever-growing chorus of public officials and media sources that have correctly labeled what is now being referred to as “SharpieGate” as the unfounded conspiracy theory that it is."

We verified this with Erika Flores, the Maricopa County Deputy Director of Communications for Elections on Oct. 26.

The Attorney General's Office sent a letter to the Maricopa County Elections Department on Wednesday requesting information about the use of Sharpies on ballots.

The letter also inquired about how many ballots were spoiled on-site and voters were offered a new ballot and what is the process of canceling a ballot.

The election department has until Thursday at noon to provide this information or give an explanation as to why cannot provide the information.

Maricopa County Board of Supervisors Chairman Clint Hickman, a Republican, and District 5 Supervisor Steve Gallardo, a Democrat, issued a joint statement to curb false information about Sharpie usage, noting it does not invalidate ballots and that its use is not new for the county.

“We did extensive testing on multiple different types of ink with our new vote tabulation equipment.  Sharpies are recommended by the manufacturer because they provide the fastest drying ink.

The offset columns on ballots ensure that any bleed-through will not impact your vote.  For this reason, sharpies were provided to in-person voters on Election Day.  People who voted by mail could use sharpies, or blue or black pens. Our Elections Department has been communicating this publicly for weeks.”

Social media blew up Wednesday with concerns that Sharpie marks on ballots will make a ballot unable to be read by voting machines.

Aguilera claimed that she placed her ballot into a ballot box after filling it out with a Sharpie. When the ballot box failed to register the vote, a poll-worker canceled it.

When Aguilera requested a new ballot, it was denied. She is suing based on violation for the County for a "failure to comply with the Election Procedures Manual" and "failure to ensure maximum degree of correctness, impartiality and uniformity of Election procedures."

The full lawsuit is attached below:

RELATED: FAQ: Sharpies, Arizona elections and the whole thing about it

The Maricopa County Elections Department posted an informational video on Oct. 24 that said voters are allowed to use Sharpies on their ballot and they will be counted.

IMPORTANT: If you voted a regular ballot in-person, your ballot will be counted, no matter what kind of pen you used (even a Sharpie)! 1/

The full statement from the Maricopa County board of supervisors can be read below:

The Maricopa County Board of Supervisors address election concerns from voters. Read the full letter below: pic.twitter.com/cAHgV5Krij