Anthem couple claims someone set their political sign on fire

The sign read, "You can’t fix stupid, but you can vote it out.” 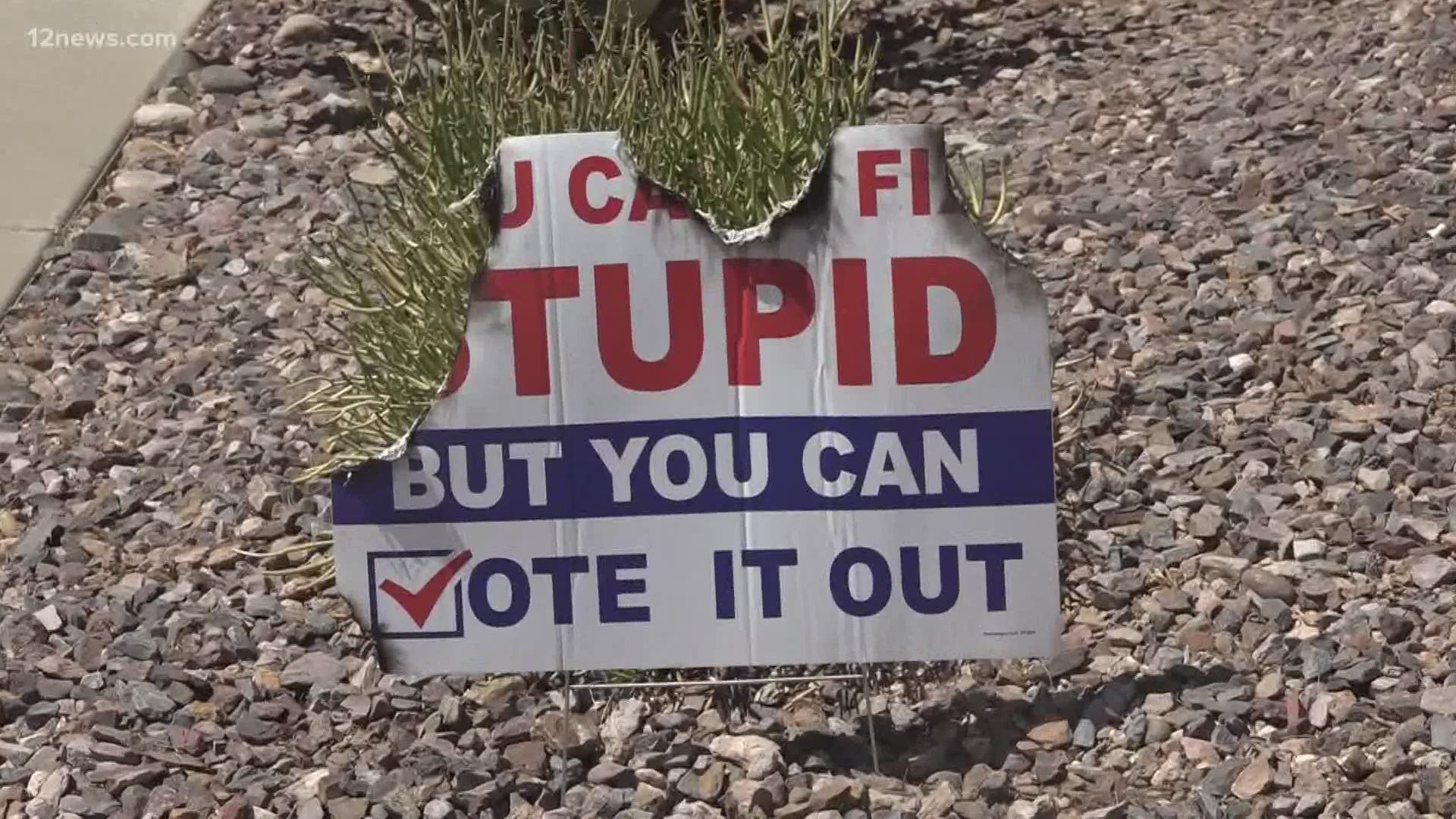 PHOENIX — We are just under two months from the presidential election with Arizona being considered a battleground state for the White House.

Plenty of people show their support for their favorite candidate by displaying signs in their yards but one Darrell Grant and his wife Susan Hodges-Grant woke up Sunday morning to find one of their signs torched.

The sign was ambiguous with neither President Donald Trump or former Vice President Joe Biden's name displayed. Simply the message "You can’t fix stupid, but you can vote it out.”

Darrell Grant and his wife Susan says that sign “fired” someone up.

“I personally thought the sign might be stolen, thrown in the street, painted over whatever. That type of thing. But someone went to the lengths to burn it,” said Darrell.

Their neighbors are a mix of Trump and Biden supporters. Air Force veteran Thomas Kirk, 91, lives in the Anthem County Club neighborhood. He is a former prisoner of war, shot down over Hanoi during the Vietnam War.

He would become a cellmate of the late Sen. John McCain at the infamous Hanoi Hilton. Kirk supports Trump.

“I’m not one who wears a hat and runs around everywhere, but I can do that. I can put a sign out and say I support him and think we need to re-elect him,” said Kirk.

Under Arizona law, criminal damage of a political sign is a misdemeanor and could carry a fine.

According to the Maricopa County Sheriff's Office, the charge on this crime is ARS 13-1602A1.

A. A person commits criminal damage by:

1. Recklessly defacing or damaging property of another person.

2. Recklessly tampering with property of another person so as substantially to impair its function or value.

3. Recklessly damaging property of a utility.

4. Recklessly parking any vehicle in such a manner as to deprive livestock of access to the only reasonably available water.

5. Recklessly drawing or inscribing a message, slogan, sign or symbol that is made on any public or private building, structure or surface, except the ground, and that is made without permission of the owner.

B. Criminal damage is punished as follows:

1. Criminal damage is a class 4 felony if the person recklessly damages property of another in an amount of ten thousand dollars or more.

2. Criminal damage is a class 4 felony if the person recklessly damages the property of a utility in an amount of five thousand dollars or more or if the person intentionally tampers with utility property and the damage causes an imminent safety hazard to any person.

3. Criminal damage is a class 5 felony if the person recklessly damages property of another in an amount of two thousand dollars or more but less than ten thousand dollars or if the damage is inflicted to promote, further or assist any criminal street gang or criminal syndicate with the intent to intimidate and the person is not subject to paragraph 1 or 2 of this subsection.

4. Criminal damage is a class 6 felony if the person recklessly damages property of another in an amount of one thousand dollars or more but less than two thousand dollars.

5. Criminal damage is a class 1 misdemeanor if the person recklessly damages property of another in an amount of more than two hundred fifty dollars but less than one thousand dollars.

6. In all other cases criminal damage is a class 2 misdemeanor.

C. For a violation of subsection A, paragraph 5 of this section, in determining the amount of damage to property, damages include reasonable labor costs of any kind, reasonable material costs of any kind and any reasonable costs that are attributed to equipment that is used to abate or repair the damage to the property.

Both the Grants and Kirk say today’s politics have gotten out of hand. Instead of burning down a political sign, they’d rather see folks take that energy to the ballot box come this November.

“I want to see everybody vote and vote for whatever they think,” said Kirk.

“Even when we disagree, we are still Americans and we still want a strong country and we want the same thing,” said Susan Hodges-Grant. 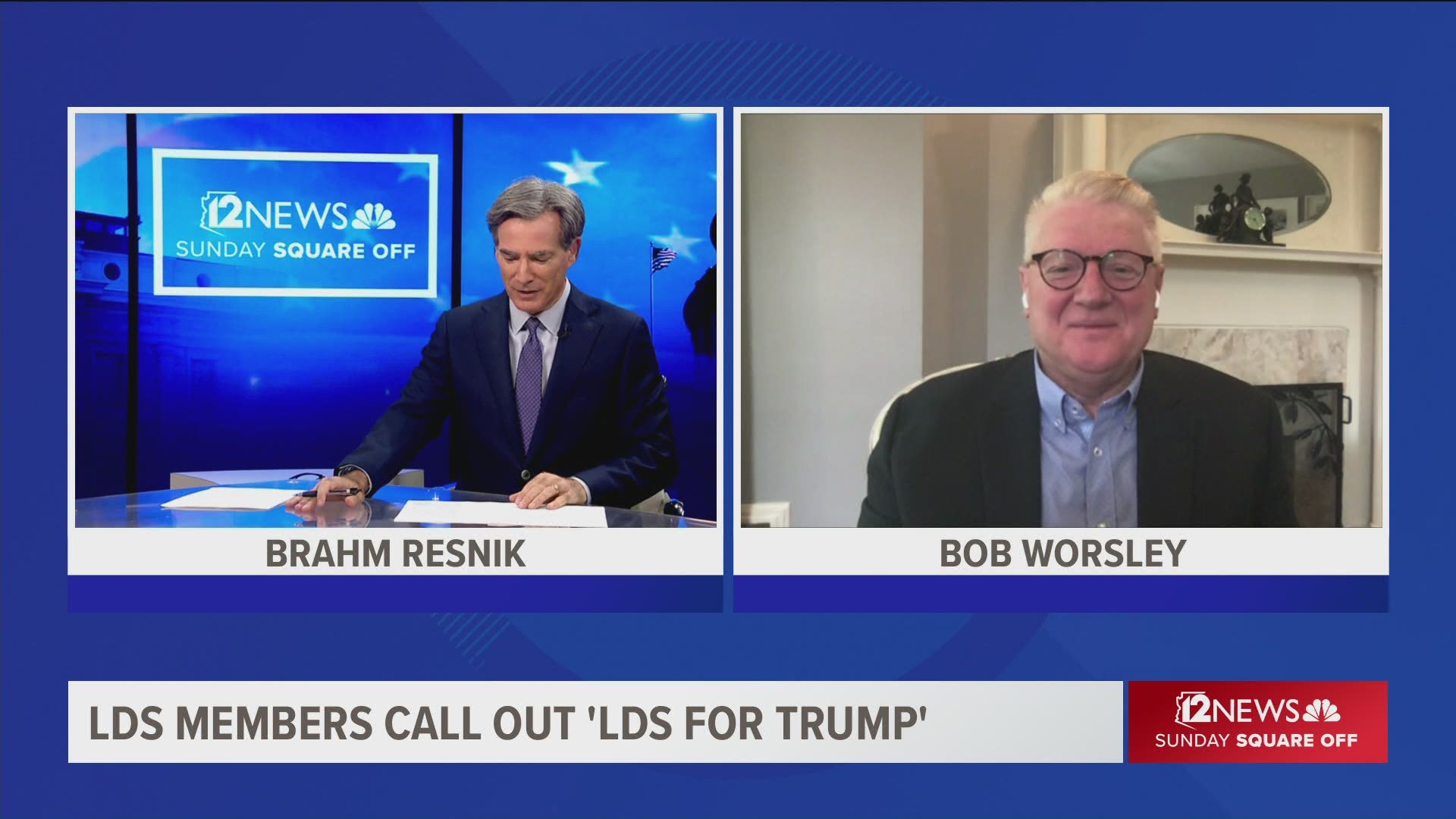