Numbers of anti-trans bills have skyrocketed in 2021 as the transgender community and advocates fight for their right to exist. 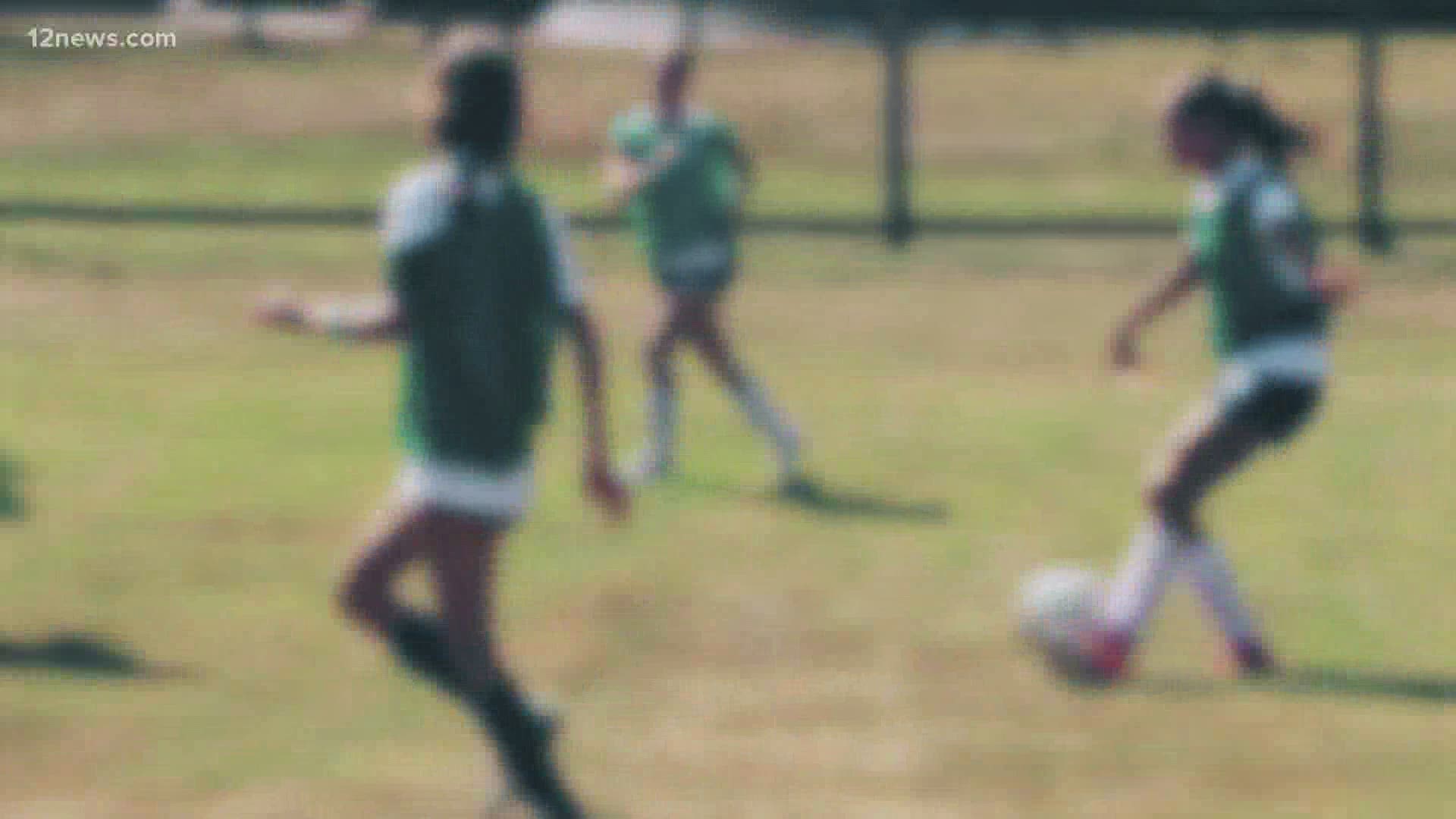 The right to exist is not something many of us think about on a daily basis, but for transgender Americans, it is something they fight for every day of their lives.

“It’s just a core, human, gut feeling of being outnumbered,” said Tucson mom Liz Caraballo as she reflects on the more than 70 anti-trans bills introduced just this year.

Her 14-year-old Juniper is transgender and identifies as non-binary, used to describe someone who experiences a gender identity that is neither exclusively male or female or is in between or beyond both genders. In 2021, 65 Republican-sponsored bills specifically target trans youth.

“There is a lot of fear that comes with how our community is stigmatized. It feels awful that so many people are willing to say awful things and blatantly say no to acknowledging us,” said Juniper. “I would hate for my own children to have to go through the stuff I’ve had to go through in my short 14 years of life.”

An explosion of Anti-Transgender Bills in 2021

According to a survey conducted by the ACLU, bills targeting trans youth have skyrocketed this year. 65 out of 73 bills, advocates say, target the trans community is specific to our most vulnerable. There were 41 bills last year and just seven in 2019.

This year GOP State Senator Wendy Rogers introduced SB1637 which would ban trans athletes from competing outside of their assigned biological sex.

In a statement to 12 News, Rogers says she introduced the bill to protect girls. But also added that "God made two genders, male and female."

The Rogers bill is particularly disgusting for trans advocates.

Chris Mosier is the first openly trans man to make a U.S. national team. He advocates for the transgender community and is a highly regarded speaker, policy expert and consultant.

“Your 14-year-old who just wants to play high school basketball with her friends may be subjected to an internal and external examination of her genitalia in order to play school sports,” said Team USA Athlete and Trans Advocate Chris Mosier.

Last year GOP Representative Nancy Barto introduced a similar bill, citing a threat to women's sports but could not provide examples of cheating taking place in Arizona. Below is a video from a conversation between Rep. Daniel Hernandez and Rep. Barto in 2020 regarding the bill: 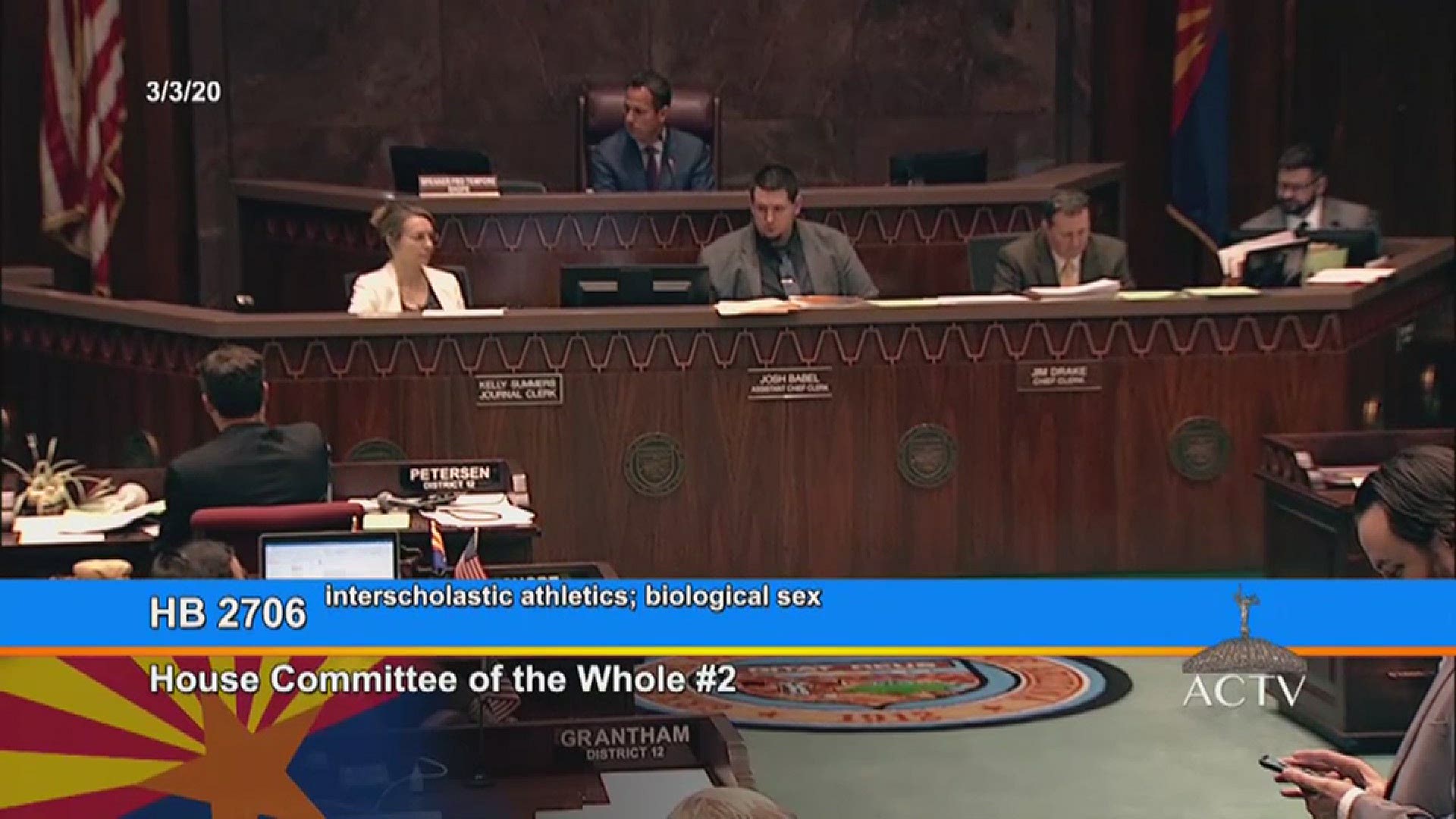 Arizona already has a policy for trans athletes to participate in youth sports, and it works

"Trans kids have been participating in sports in the gender in which they identify in Arizona for years and it hasn’t been a problem,” said Mosier.

The Arizona Interscholastic Association (AIA) has a pathway for trans kids to play sports that involves support from medical professionals, parents and the athlete's school.

"Our whole purpose is to be inclusive," said AIA Executive Director Dave Hines. “We have had no issue with an athlete, there has not been one complaint from an opposing school,” Hines says Arizona's policy works, and to date, there are around 20 trans athletes competing across the state. "If it’s not broke why do we need to fix something,” said Hines.

Many of the bills share a common thread with language originating from the organization Alliance Defending Freedom (ADF) based in Scottsdale.

The group has been designated as an anti-LGBTQ hate group by the Southern Poverty Law Center. ADF denies their position is hateful and says their agenda focuses on Title IX.

"The focus on all of this is about creating a fair and level playing field for female athletes and ensuring those opportunities are not being taken away by biological males and that women will continue to have that opportunity to use their talents on the athletic field to their fullest abilities,” said Sharp.

ADF is currently representing athletes in Idaho and Connecticut.

"Trans boys and trans men are largely left out of this conversation because of the sexism that exists within sports," said Mosier. "This plays into the myths and misconceptions that have largely played into these bills. This idea that anyone assigned female at birth would be less capable of competing with anyone assigned male at birth."

Mosier is not the only athlete speaking out. In a Washington Post Opinion piece, US Women's Soccer superstar Megan Rapinoe said these bills to ban trans kids from sports are trying to solve a problem that doesn't exist.

"There are many very real threats for young women in sports in Arizona and across the country base on the way, the system is set up; from funding to access, to equal pay to sexual abuse that takes place, but having a trans teammate is not one of them," said Mosier.

Anti-Trans Bills in Arizona go beyond the competition field

Advocates remain concerned with bills like SB1456, which allows parents to opt-out of sexual education classes and prohibits learning about HIV and AIDs. It has passed the Arizona Senate and is currently waiting for a full vote in the house.

Dr. Carol Brochin is assistant Professor of Bilingual/Multicultural Education at the University of Arizona School of Education. She is also the mother of a trans-non-binary child.

"This bill doesn't specifically say LGBTQ people but targets gender and sexuality," said Dr. Brochin. "The bill is broad but can have serious implications on the work teachers can do outside of sex education and this bill allows parents behind closed doors to say I want to protect my children from LGBTQ people."

“It is a repressive bill that threatens to take us back before the 1950s,” said Democratic Sen. Victoria Steele.

SB1456 was introduced by Sen. Nancy Barto, who says it’s designed to give parents the right to choose what their students are hearing in school.

Advocates encourage respecting each other's experience with an open ear

“People that are trying to talk to you and trying to be heard. Listen to their words and do your best to understand them,” said Juniper.

For resources on the transgender community, visit Transathlete.com, or for LGBTQ Educational resources visit GLSEN.