Some experts argue that a large population of Trump supporters believe democracy is at stake in the 2020 election. 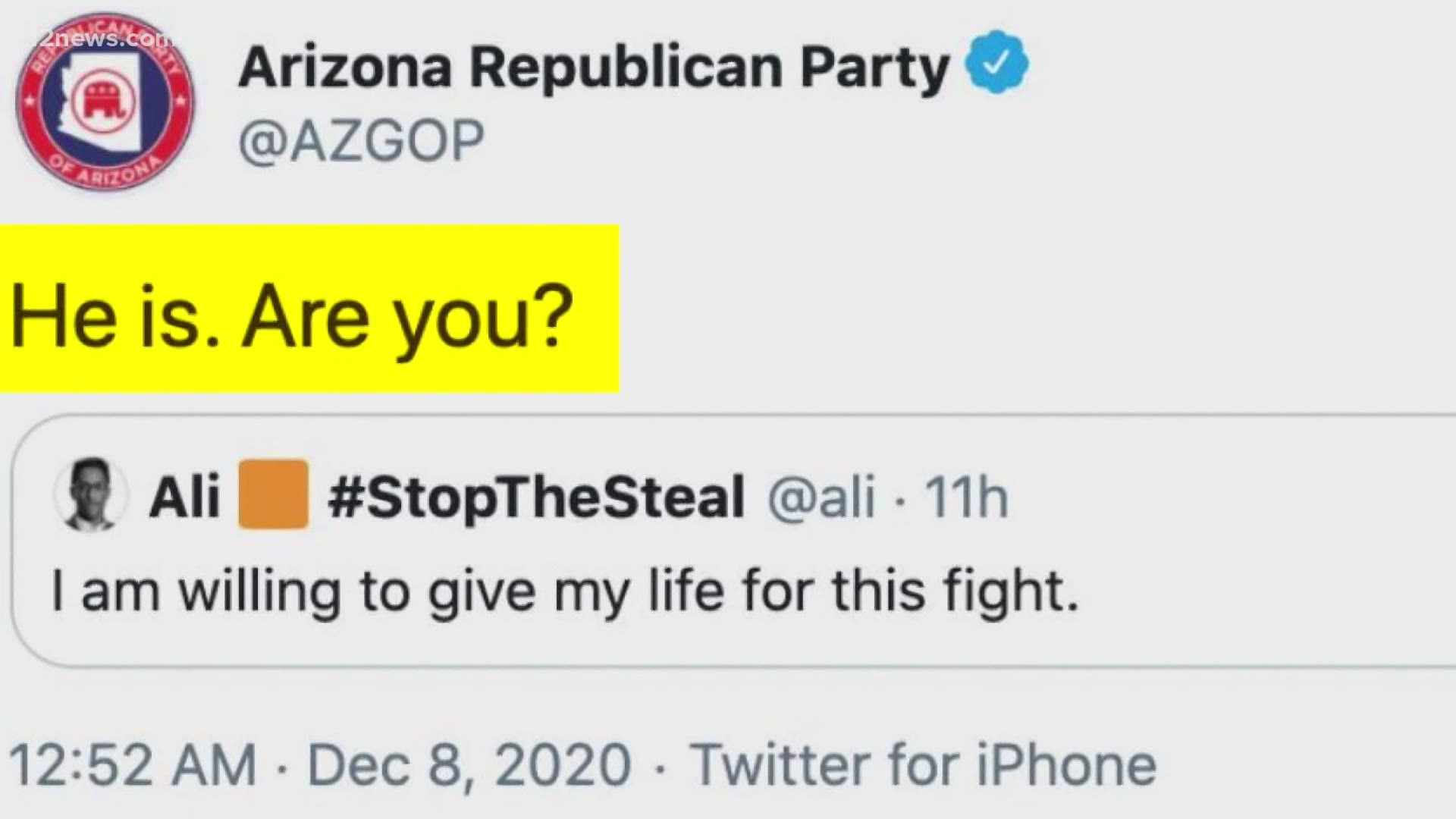 PHOENIX — Using the #StopTheSteal slogan, a President Donald Trump supporter wrote on Twitter on Monday night, “I am willing to give my life for this fight.”

The official account of the Arizona Republican Party retweeted the message and added, “He is. Are you?”

Was the tweet political satire? Maybe. But then the Arizona GOP doubled down.

The account tweeted overnight a clip from "Rambo" with the quote “This is what we do, who we are. Live for nothing, or die for something.”

The party has since taken down the second tweet, but there may be a reason it was meant to be taken seriously.

Some experts argue that a large population of Trump supporters believe democracy is at stake in the 2020 election.

RELATED: VERIFY: No, 6,000 ‘fake votes' for Biden were not found in Arizona

“If you are deep in this bubble what you are hearing is that the election has been stolen because of mass voter fraud, that Trump is fighting a battle for decency and democracy and violence may be the only answer because all is lost,” said Melissa Ryan of Card Strategies, a consulting group that works to combat disinformation and extremism.

The media bubble of some Trump supporters is shrinking as well, which only creates more divisions within the Republican Party.

“Not only are folks being incited by more extremist rhetoric, but they are being incited from information that is just not true,” Ryan said.

The state Republican Party and the office of Gov. Doug Ducey did not respond to requests for comment about the tweets.

State House Minority Leader Jennifer Longdon (D), a victim of gun violence, said she thought the tweet was an account hack until she saw it remained up for several hours.

“This is more than a dog whistle, it’s a bullhorn,” Longdon said.

“We know the Arizona GOP Chair has a history of extremism. But this isn’t something as benign as chasing chemtrails,” Longdon said.

“This is recruiting folks to commit acts of violence. To martyr themselves to a cause that actually has no basis in fact.”

The tweets come after a month of tension surrounding the election.

Secretary of State Katie Hobbs was harassed at her own home. Last Thursday, pro-Trump protestors confronted Capitol security, threatening to return with 500 armed men if they weren’t given access to legislators.

Ward has been increasingly hostile towards the governor as well, last week tweeting the acronym #STHU towards him, a message to “shut the h-- up." When asked about the tweet, Ducey said:

“I would say the feeling is mutual, with respect to her.”