O'Rourke laid out a progressive vision of a country that grants citizenship to young immigrants known as "Dreamers" and treats all immigrants with respect. 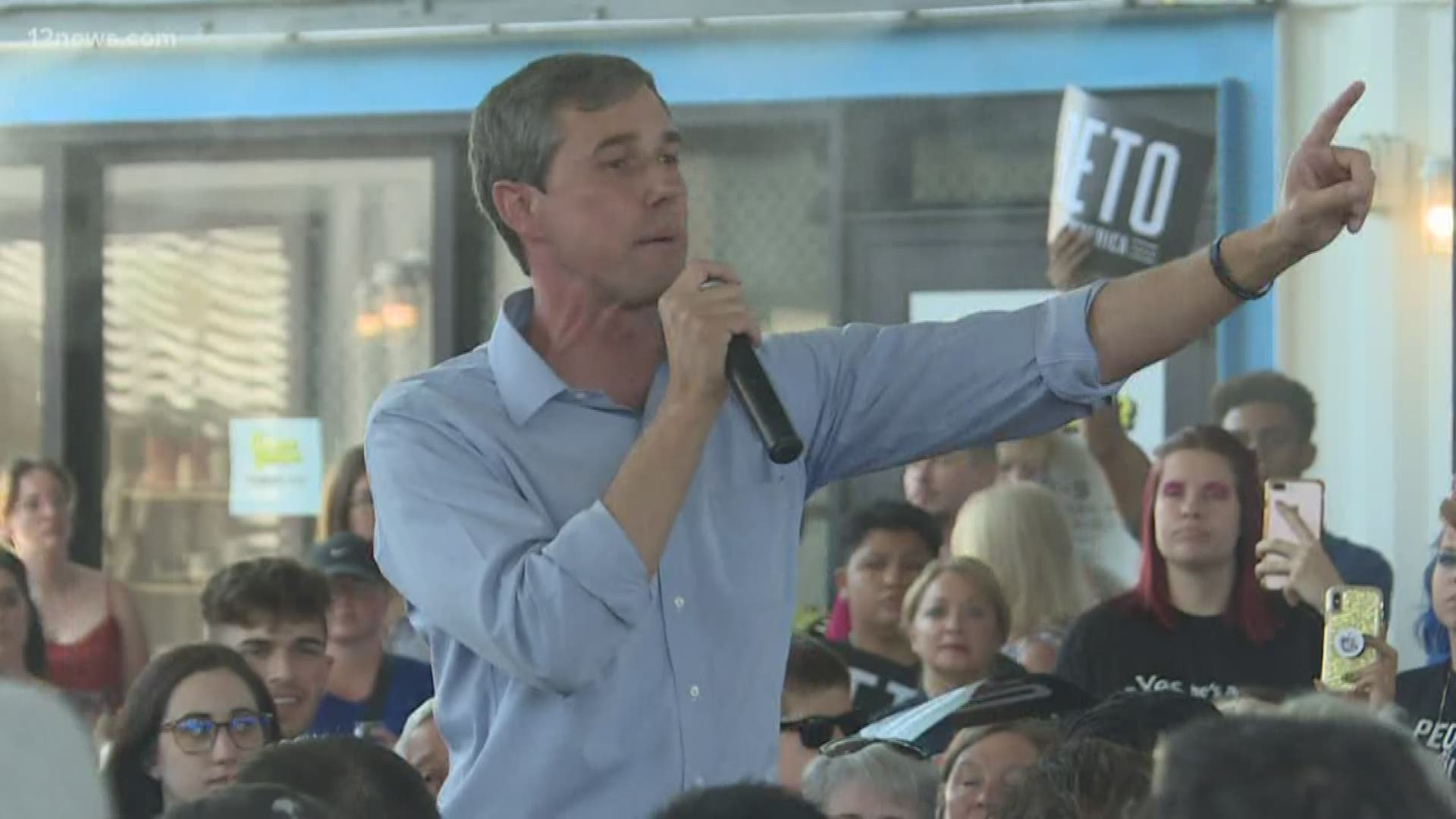 Editor's note: The above video is from an Oct. 6 newscast with 12 News reporter Matt Yurus.

PHOENIX — Democratic presidential candidate Beto O'Rourke took his calls for tough gun laws and inclusive immigration policies to Arizona Sunday, looking well beyond the early primary states as he campaigned in a conservative but changing region.

Looking to break through a crowded field of Democrats, O'Rourke laid out a progressive vision of a country that grants citizenship to young immigrants known as "Dreamers" and treats all immigrants with respect.

"We're going to rewrite this country's immigration laws in our own image," O'Rourke told an enthusiastic crowd of supporters a hip collection of bars and restaurants made of shipping containers in downtown Phoenix.

Immigration is a potent issue for Arizona Democrats, particularly among Latino activists who were drawn to politics by their opposition to former Phoenix-area sheriff Joe Arpaio, who's immigration crackdowns led to a racial profiling verdict against his office. Arpaio's criminal contempt of court conviction for violating that verdict was erased by a 2017 pardon from President Donald Trump.

O'Rourke has leaned heavily on his support for a mandatory buyback of assault rifles. The position has put him at odds with longtime Democratic positioning on guns, which has emphasized keeping firearms from dangerous people without taking weapons away from law-abiding citizens.

"That also means every firearm is registered, every gun owner is licensed, and every AK-47 and AR-15 is bought back so we relieve our fellow Americans of any fear of being gunned down where they are in their schools, in their churches, in their synagogues," O'Rourke said.

At one point, O'Rourke was interrupted by a heckler, who was promptly shouted down by supporters shouting "Beto." During a question and answer period, he gave the woman who heckled him a microphone, and she said his immigration policies are a "slap in the face" to people who follow the law.

"What is a slap in the face to my conscience ... is taking kids from their parents and putting them in cages," O'Rourke responded, referring to a Trump administration policy that separates families that arrived in the U.S. without visas.

Long a Republican stronghold, Arizona is emerging as a battleground in the November election thanks to a growing number of Latinos and white suburbanites — groups that have turned against Trump. But with a primary on March 17, weeks after the prize of delegates on Super Tuesday, the state has seen little of the Democrats seeking their party's nomination.

O'Rourke told reporters he's campaigning outside the early primary states because traveling off the beaten path worked for him in his 2018 Senate run, when he did better than Democrats historically perform in Texas but lost to Republican Sen. Ted Cruz.

After his rally, O'Rourke told reporters that he believes Trump committed high crimes and misdemeanors, the constitutional standard for impeaching a president. He cited Trump's requests for China and Ukraine to investigate business dealings of former Vice President Joe Biden, a leading Democrat looking to unseat him.

"He's asking a foreign power to involve themselves in our domestic elections," O'Rourke said of Trump. "That's explicitly the reason we have impeachment as a protocol to hold the president accountable in the constitution in the first place."

RELATED: Martha McSally has a Republican challenger in the race for US Senate