A Cottonwood man was arrested after allegedly storming Capitol Jan. 6 as a Book of Mormon figure. Judge said he is 'easily swayed by thoughts and actions of others.' 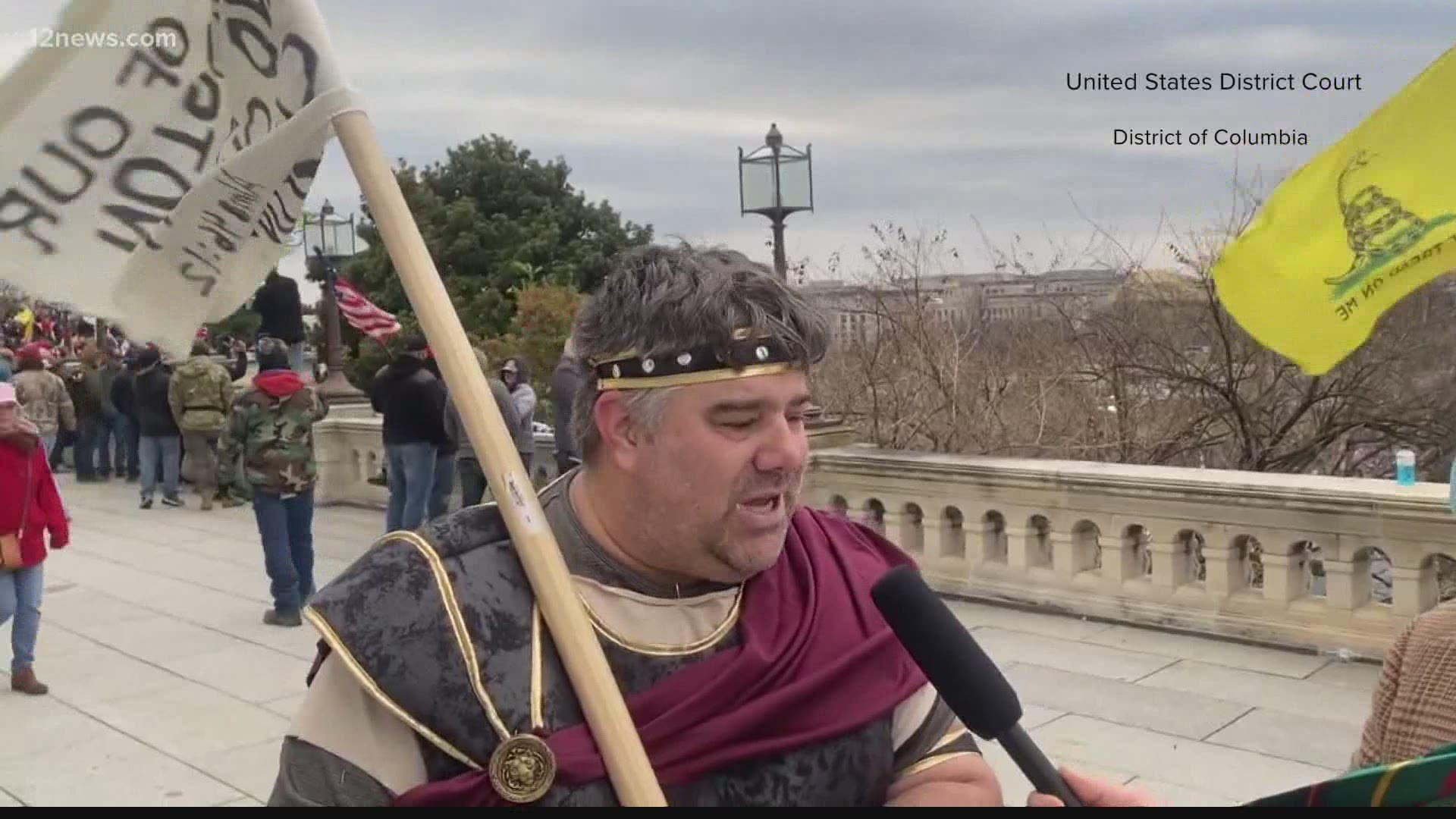 PHOENIX — A Cottonwood man who was charged last week in the Capitol insurrection was ordered released Tuesday to his mother’s custody while his case moves forward in Washington, D.C.

Nathan Wayne Entrekin, 48, allegedly stormed the U.S. Capitol on Jan. 6 in a gladiator costume as "Captain Moroni," a military commander in the Book of Mormon who led a fight for freedom.

He was arrested Thursday by the FBI at the home he shares with his mother in Cottonwood, southwest of Sedona.

During Entrekin’s initial court appearance Tuesday at Federal Court in Flagstaff, U.S. Magistrate Judge Camille D. Bibles said her ruling was guided by the precedent of an “individualized assessment of danger,” established by the Federal Court in Washington, D.C.

“Not everyone who entered the Capitol poses the same type of risk,” Bibles said.

But Bibles said she had concerns about Entrekin’s mental health.

“I am concerned that the defendant is easily swayed by the thoughts and actions of others,” Bibles said. “He can pose a danger to others in certain circumstances.”

The judge added these conditions to Entrekin’s release:

“A group setting is not a good place for you to be,” she said.

Entrekin is charged with knowingly entering or remaining in a restricted building or grounds without lawful authority, and violent entry and disorderly conduct in a house of Congress. He could face up to a year in prison.

Bibles said there was “overwhelming evidence” of his guilt.

“The events of January 6 were an attempt to disrupt our democracy and government,” Bibles said. “It does appear the defendant premeditated his visit to Washington.

“The irony of his perverse interpretation of the (Book of Mormon) parable of Captain Moroni is not lost on the court. The interpretation he went forward with was a very violent version.”

The Book of Mormon is a sacred text of the Church of Jesus Christ of Latter-day Saints.

The criminal complaint links to a YouTube video of an interview with Entrekin on the Capitol Terrace in which he explains his Captain Moroni analogy.

The allegations against Entrekin are based in large part on cell phone videos he narrated for his mother's benefit during the Capitol insurrection, as well as images and another video on social media.

"Wow, Mom. I wish you were here with me. It's really exciting in here," Entrekin said in one of the videos, according to the complaint, filed on Wednesday. "I'm here for Trump. Four more years, Donald Trump! Our rightful president!"

Images of Entrekin show he was dressed in a gladiator costume, which an FBI agent said was identical to a plus-size costume sold online.

The judge noted Entrekin’s cooperation with law enforcement during the investigation.

The case will be moved to Federal Court in Washington, D.C.

Charges stemming from the Jan. 6 Capitol insurrection are being filed by federal prosecutors in Washington. To date, more than 500 people have been charged.