Bogus mailer portrays progressive Phoenix Democrat as full MAGA Trumper, and no one knows who sent it 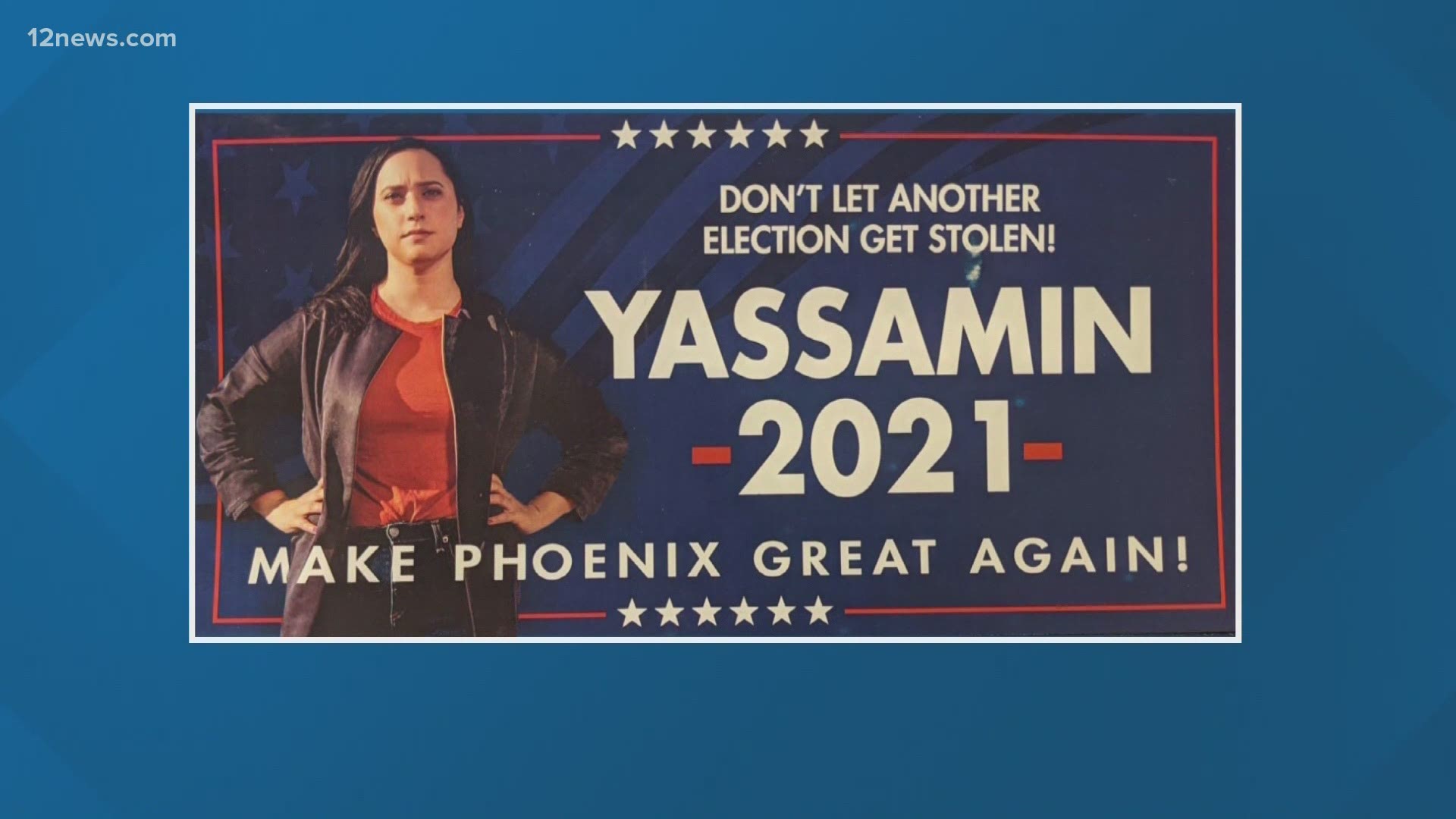 PHOENIX — Yassamin Ansari is a progressive, first-time candidate for the Phoenix City Council whose issues are clean air, affordable housing and pandemic relief.

But, an unknown group is paying for last-minute mailers that portray Ansari as the full MAGA, second coming of Donald Trump who will "Make Phoenix Great Again!"

"To be very honest it's been a really horrific past 24 hours," Ansari said in an interview late last week, a day after the mailer was sent to voters in District 7, in west and southwest Phoenix.

"I am not a fan of Donald Trump. I've been a lifelong Democrat... My first foray into politics was volunteering for President Obama's first campaign as a high school student."

The mailers went out as voters got their mail-in ballots for the March 9 runoff election.

Phoenix elections are officially non-partisan, but District 7 is largely Democratic.

In a low-turnout election that gets little publicity, direct-to-voters mailers can have an impact.

Ansari believes the Trump mailer is hurting her campaign.

"They are trying to confuse Democrats," she said. "The effects have been pretty devastating... People are getting tricked by this."

I received this deceptive mailer along with a flyer from your opponent and my early ballot. Without much consideration, I voted for your opponent whose flier did not have any red flag statements. I feel deceived. Is there a way to cancel my ballot? https://t.co/DCPxmb2IFy

The election in District 7 is one of two runoff elections on the March 9 ballot.

The other is in District 3, in north and north-central Phoenix, where Councilwoman Debra Stark faces challenger Nicole Garcia.

But the winner of the District 7 election, offering the certainty of a new face on the nine-member council, could decide how the council votes on divisive issues like citizen oversight of police conduct.

Ansari's campaign has called for a city and county investigation of the group behind the mailer.

The mailer was sent by an outfit called Americans for Progress. The group hasn't registered with the City of Phoenix, and there is no other information available.

Postal information on mailers indicates Americans for Progress is linked to another dark-money group, Democrats for a Better Phoenix, that has supported Ansari's opponent, Cinthia Estela.

Estela posted a response to the Trump mailers on Facebook:

"I do not condone nor find an acceptable place for dark money in our democracy. My family and I have also been attacked by dark money from my opponent's supporters during this campaign, therefore I empathize with this situation. The messages have attacked my reputation, integrity, and my children."

While the bogus MAGA mailer rattled the candidate, there's not much she can do about it.

Whoever dropped the fake MAGA mailer won't have to disclose themselves until early March, if they ever disclose at all.

"You can only imagine how disheartening this whole situation is," Ansari said.

"The fact that we have Prop 419, but I don't trust there's going to be real accountability in this situation."