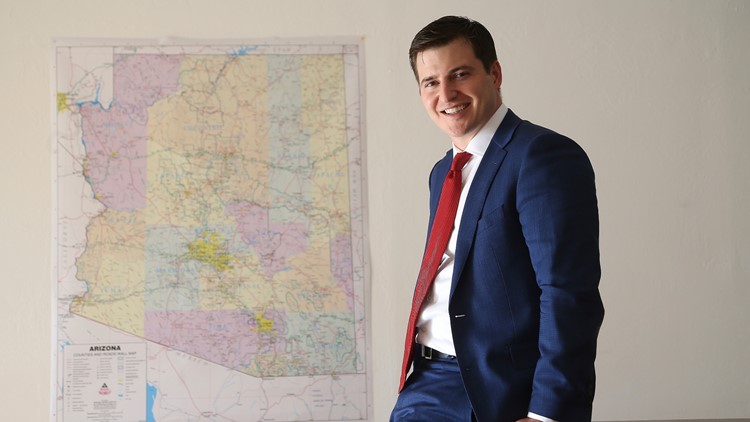 Photo by: AP
Daniel McCarthy, a Phoenix-area businessman who founded a real-estate brokerage and cosmetics company with his wife, announced he is challenging U.S. Sen. Martha McSally in the Republican primary, Wednesday, Aug. 28, 2019, in Glendale, Ariz. (AP Photo/Ross D. Franklin)

#BattlegroundAZ: Is McSally's potential Senate primary foe in 'demand' or a distraction?

PHOENIX - #BattlegroundAZ is a rolling update on the week’s significant political news in Arizona, a 2020 battleground state that could decide which party wins the White House and the U.S. Senate.

Daniel McCarthy’s campaign slogan is #DemandDaniel. Is the first-time candidate truly in demand or just a distraction?

What McCarthy brings: What he doesn’t bring—right now—is the money to win a high-stakes Senate race, either his own cash or donors’ or outside groups'.

McCarthy told an interviewer he would spend “as little (of his money) as possible.” Given that McCarthy’s family business is private, there’s no way to know how much money he has.

McCarthy is a precinct committeeman. He donated more than $14,000 to President Trump and the Republican Party in 2016.

But he's launching a statewide race from scratch.

McCarthy's small social media presence attracts what was once known as the GOP’s Tea Party wing.

He has virtually no name recognition. But his family business' product, the Makeup Eraser, is a big seller.

McCarthy’s case against McSally: It’s still coming into focus. At a time when the White House is held by a Republican, McCarthy argues: “We need change now” and there is “corruption at the highest levels.”

It appears Republican Gov. Doug Ducey was going to try to talk McCarthy out of the race, but their planned meeting fell apart. McCarthy said it was over his objection to Ducey’s support for a “red flag” law to promote gun safety.

McSally’s loss to Sinema, as well as what's shaping up as a toss-up 2020 race against Democrat Mark Kelly, also rankle.

Meantime, McSally has been endorsed by President Trump, votes with the president 96% of the time, and has $4.4 million in cash on hand more than a year before the election (as well as the pledge of much more from a group linked to Senate Majority Leader Mitch McConnell).

If McSally won a competitive primary, she would have more time to regroup for the November election. The state Legislature moved up the 2020 primary date to Aug. 4, almost four weeks earlier than the 2018 primary.

Kelli Ward knew bad news was on the way.

So less than 24 hours before it was posted, the Arizona Republican Party chairwoman tried a Twitter takedown of a story by the Arizona Mirror.

The story: Ward and her husband set up a political consulting firm last year, according to the Mirror, before her election last January as party chair. The Wards' firm is selling its services to Republican candidates.

Why that's a problem: Party chairs are supposed to work to elect party candidates, not profit off them. Ward’s business is a little over a year old, but its very existence raises ethical and legal questions:

Ethics: Party chairs are expected to remain neutral in party primaries. But the Wards' firm is soliciting business from Republican candidates, according to the Mirror report. What message does that send to other potential GOP candidates? Should the party chair be personally profiting off party candidates?

Legal: State parties spend money to support candidates. Under the law, a party can’t coordinate spending with a candidate. Would the Republican Party be breaking the law by helping candidates advised by the party chair’s business? Or would those candidates be cut off from any party help because they're aligned with the chair?

Ducey on the Clock

Arizona Gov. Doug Ducey says he’s interviewed all seven finalists for a state Supreme Court vacancy and will make the appointment “sometime soon” (he has until Sept. 24).

Why the pick matters: Ducey is widely expected to name Maricopa County Attorney Bill Montgomery to fill the vacancy on the seven-member court:

'Ducey Court': This will be the governor’s fifth appointment to a bench he expanded by two seats, cementing the court for years after he leaves office in 2022 as the “Ducey Court.”

Controversial appointee: A Montgomery appointment would be the most controversial pick for the court in recent memory.

The top prosecutor in the country’s fourth-largest county has come under fire for his hardline prosecution of marijuana offenders; his spending on an Islamophobic former FBI agent to train law enforcement on the “Muslim threat”; and his oversight of celebrity prosecutor Juan Martinez, currently facing a disciplinary hearing on sexual misconduct allegations.

Open seat: Montgomery’s departure would create an open seat for Republicans to defend in 2020, a worrisome prospect given the two-term prosecutor’s close call in his 2016 re-election victory.

Soros spent more than $3 million on two county law-enforcement races in 2016: $1.3 million on Rodriguez and $2 million on Democrat Paul Penzone’s victory over Arpaio in the sheriff's race.

On Sept. 2, 2017: At this time two years ago—14 months before the next election—Kyrsten Sinema still hadn’t announced she was running for the U.S. Senate in 2018 (she announced in mid-September). Sen. Jeff Flake hadn’t retired yet (he dropped that bombshell in October).

Sen. John McCain had just been diagnosed six weeks earlier with brain cancer. McCain would live for another year. He was buried one year ago today at the Naval Academy in Annapolis, Md.

Brahm Resnik moderates "Sunday Square Off" at 8 a.m. Sundays on 12 News. The show brings together Arizona's political newsmakers and commentators to discuss the top issues of the day.