#BattlegroundAZ: No Arizona primary for President Donald Trump in 2020 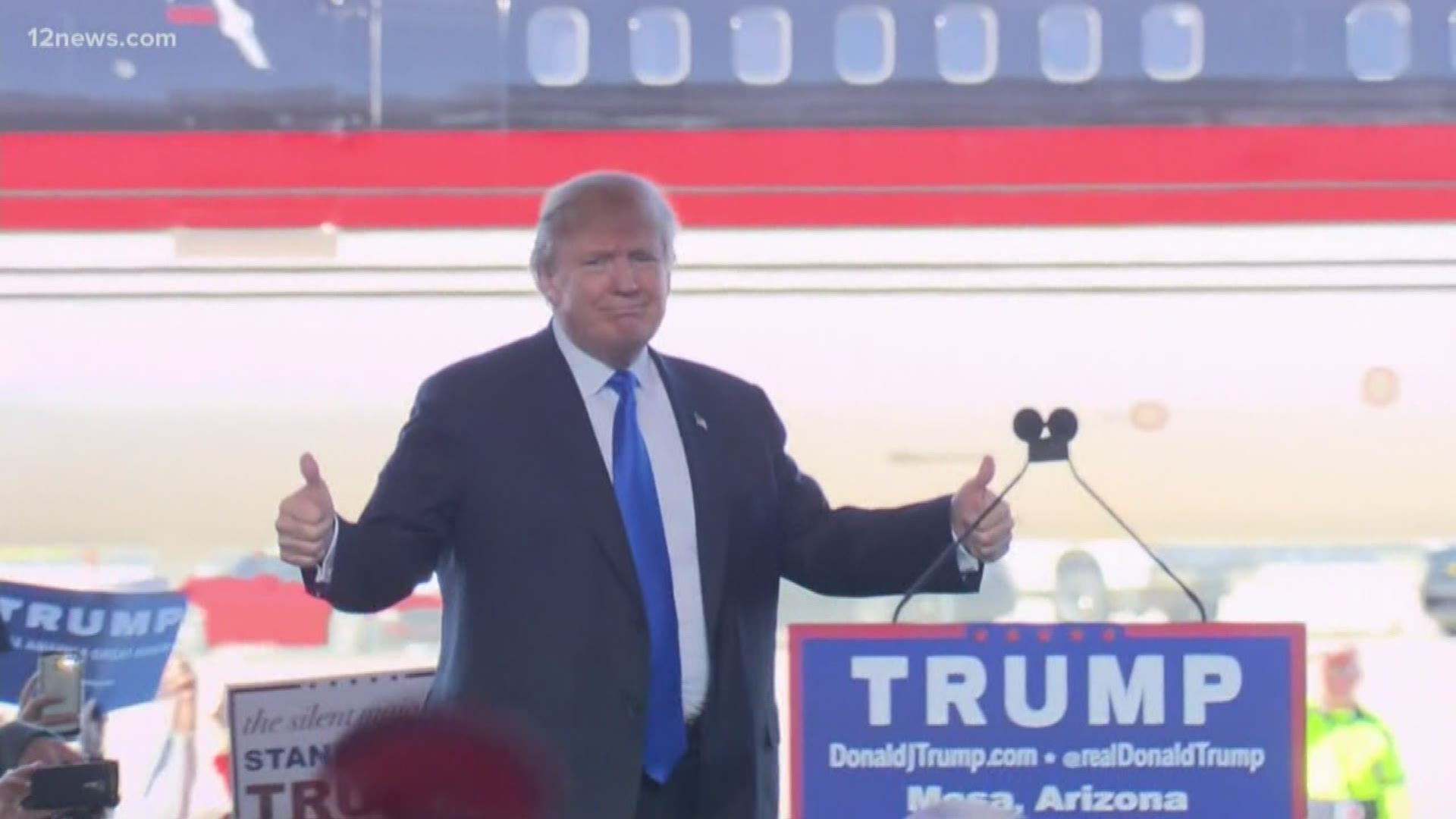 A rolling update on the week’s significant political news in Arizona, a 2020 battleground state that could decide which party wins the White House and the U.S. Senate.

As presidential primary season approaches, President Donald Trump won’t be on a ballot in Arizona.

"Arizonans are excited and energized to send President Trump back to the White House for four more years," Ward said in a statement to 12 News.

"This president's list of accomplishments in his first term are unprecedented - from jobs to securing our border to taking care of our veterans to making health care more affordable - and Arizonans have directly benefited.

"By opting out of the presidential preference election, our united Republican Party of Arizona will save taxpayers millions as we look ahead to the general election on November 3."

12 News obtained the Arizona GOP's talking points for grassroots members, to explain why the primary was scrapped. The party labels the move "the ultimate party builder."

Over the last 20-plus years, both the Republican and Democratic parties in Arizona have chosen not to hold a presidential preference election - the official name of Arizona’s closed primary - when an incumbent president was running for a second term.

The president’s support among Arizona Republicans has remained strong during his presidency.

But many political analysts say Arizona is in play in 2020. Trump’s narrow margin of victory in Arizona in 2016, coupled with Democrats’ once-in-a-generation victories in statewide elections in 2018, suggest the state is trending purple.

Back Story: Last April, the Republican Party’s executive committee approved a resolution asking the GOP-controlled Legislature to give parties the ability to opt out of the PPE in 2020. A bill passed with the state budget put the opt-out into state law. It gave the parties a deadline of Sept. 16, 2019, to scrub the PPE.

What GOP Wins, Loses: The Trump campaign won’t have to spend money on a primary.

But primaries are also valuable tools for registering voters. Arizona’s PPE is a closed primary. So voters who want to cast a ballot must register with a party to vote.

The Democratic primary will be the only game in town for independents or others who want to cast a ballot.

Fiasco, The Sequel? The March 2016 presidential primary was a fiasco for voters. In Maricopa County, too few polling places resulting from an underfunded election forced voters to wait in line for hours to cast a ballot.

The March 17, 2020, primary for Democrats could face the same cash crunch. According to the secretary of state’s office, Arizona’s 15 counties estimated a Democratic PPE alone would cost $7 million; the Legislature agreed to spend $4.5 million.

Preamble: It’s not that Arizona’s going purple. It’s that the state’s largest county - home to three of every five ballots cast statewide -- is already there.

Maricopa County Republicans have a registration edge of 130,000 voters over Democrats.

Yet in 2016, Republicans lost two countywide seats they had held for decades.

In 2018, Republicans lost three statewide seats they had held for a generation or longer -- in each case, the Democratic candidate won Maricopa County.

Coming Monday: A Democrat hasn’t won the Maricopa County Attorney’s Office in 42 years. Is that job the next pickup for Democrats in 2020?

On Monday, the Republican-controlled County Board revealed the process for naming an interim county attorney, to serve through the end of 2020.

The job must go to a Republican, after two-term GOP County Attorney Bill Montgomery was sworn in last week to the state Supreme Court.

-Applications are being accepted now - or as soon the county web site is ready to accept them. The applications window closes Sept. 18.

-A seven-member citizens committee, appointed by the County Board, will review applications and make recommendations to the board. The review committee's meetings and work product will be subject to the state's Open Meetings Law.

-Recommendations are due Oct. 1.

-The board will make the final selection sometime after that. Chairman Bill Gates said the County Board wasn't obligated to follow the citizens' panel's recommendations.

The board’s choice will likely come down to this: pick a Republican who can gain some of the advantages of incumbency for a run in 2020 or choose a place-holding interim with no intention of running.

On the Democratic side, four candidates have entered the party primary for county attorney. None have held elected office.

Flashback: A year ago, career sex-crimes prosecutor Rachel Mitchell was handling the biggest case of her life in front of millions of people.

PREVIOUS: #BattlegroundAZ: Is McSally's potential Senate primary foe in 'demand' or a distraction?

Last week, Ducey picked Montgomery, who was Mitchell’s boss and was enthusiastically supported by Kyl, for the Supreme Court seat.

Congressman David Schweikert to me in May 2018: “Looks like things are fine. We'll just wait for our stamp of approval."

Congressman David Schweikert to me in April 2019: “We may have some technical violations – I believe clerical – but … I think we are in good shape.”

What Congressman David Schweikert once blithely dismissed as a "bookkeeping" error now appears to be something more than that.

Last week, there was a new report on Schweikert’s ethics scandal, this one indicating Schweikert may have improperly accepted gifts and approved payments to a staffer that wasn’t in line with the work that was done.

It can be complicated to follow the scandal. Reports from the investigators at the House Ethics Committee and Office of Congressional Ethics are released up to a year after they were compiled.

A Schweikert spokesman said of the latest report: “We remain confident that the outcome of that review will be favorable for Congressman Schweikert."

Dem tweaks Schweikert: Schweikert's 2018 opponent Anita Malik tweaked him last week with a video of her call inviting him to a town hall. Some of Schweikert’s constituents have criticized him for not holding town halls.

Schweikert gave as good as he got, as seen in this video from Malik's campaign.

Malik is one of three Dems running: 2018 Eighth Congressional District candidate Hiral Tipirneni, who leads the fundraising pack with $444,000 cash on hand (Schweikert had just $169,000 at the end of June); and Stephanie Rimmer.