Hand count of ballots will take a break at end of this week. Penzone and county's stand against handing over computer equipment could throw audit back into court. 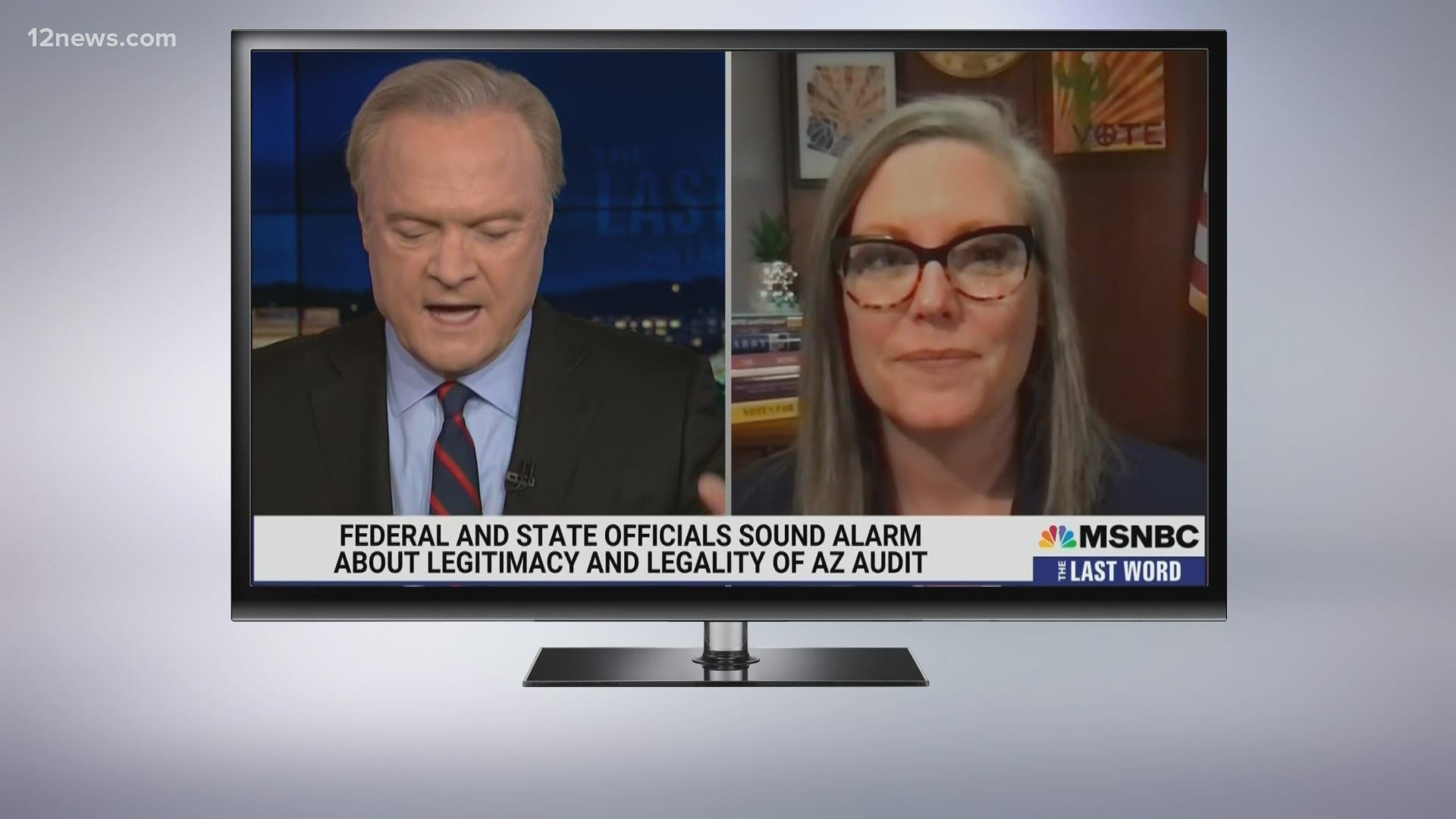 PHOENIX — Arizona Senate Republicans head into the third full week of their 2020 election audit after several days of turmoil and with more uncertainty on the horizon.

Heading into this week, the hand recount of 2.1 million Maricopa County ballots will be put on hold. An ultimatum could throw the audit back into the courts.

Six months after the November election, the audit won't overturn the results of the presidential or U.S. Senate votes in Arizona. Those results have been certified under state law and supported by Maricopa County audits.

The Senate Republicans’ audit, led and funded by people who have promoted falsehoods that the election was stolen from Donald Trump, has become a rallying point nationwide as the “first domino” that could fall in a far-fetched scheme to return Trump to office.

Here’s what happened last week and what lies ahead this week:

The most visible piece of the audit -- the livestreamed hand recount of all 2.1 million Maricopa County ballots for president and U.S. Senate - is moving at a glacial pace.

At the end of this week, the recount will come to a temporary halt.

The Senate’s contract to use Veterans Memorial Coliseum for its hand count ends on Friday. The audit will have to clear out of the coliseum that day to make room for a week’s worth of Phoenix high school graduations.

As of Monday, a new contract between the Senate and the Arizona State Fair, the coliseum’s operator, had not been signed.

Fair spokesman Jennifer Yee relayed a message from Fair executive director Wanell Costello: "The plan is they will move everything out to a secure location on the grounds and move back in on Sunday to begin working on Monday (May 24)."

All 2.1 million ballots will also be moved out of the coliseum.

Counting Will Go Into June

There are an estimated 1.8 million ballots left to count.

At the current pace, the recount wouldn’t be done for another three months.

But Bennett told audit pool reporter Ben Giles of KJZZ on Friday that the count would conclude at the coliseum in the middle of June.

“There's another (event), I think it's a gun show or something, that starts in the first week of July,” Bennett said. “So I think we'll probably be done in the middle of June. But we have until the end of June to get the work done.”

The Crossroads of the West gun show usually books the coliseum in July.

Bennett had said last weekend that temporary workers would start showing up last Monday, to double the workforce. But as of Friday, they were barely in evidence in the Coliseum work area.

“They must be being selective,” Bennett said of the subcontractor hiring the temps, “because it's not growing as fast as I think they or we would like.”

Gov. Doug Ducey’s office on Friday assigned Department of Public Safety officers to protect Hobbs after her office made the request.

“It is really unfortunate that we are at this place that people are OK just making threats like this,” Hobbs told 12 News.

On Thursday, a Phoenix real estate agent who’s a correspondent for the far-right web site Gateway Pundit shot video of himself chasing Hobbs and a staffer to her Capitol office building. He tweeted that Hobbs “runs in fear.”

“If people would stand up,” Hobbs said, “regardless of party, regardless of political consequences, and just say this is wrong, that would make a difference.”

Hobbs said she was referring specifically to Ducey.

The Republican governor's spokesman issued this statement Friday: "Threats of violence are unacceptable. We take them very seriously.”

The governor has declined to comment on the audit.

“Let this be completed and then we can talk about what the findings are,” Ducey told reporters Thursday.

The next court fight?

Last week ended with an ultimatum from Arizona Senate Republicans.

The question Monday is whether Senate President Karen Fann will follow through on that ultimatum - and possibly invite a new lawsuit that could derail the audit.

SHOWDOWN In Friday AM email, Arizona Senate GOP lawyer threatens to haul all 5 Maricopa County supervisors & elections director into Senate for sworn testimony on why they won't hand over network routers and certain computer passwords (county says it doesn't have). pic.twitter.com/ZWMDhmlBgp

Here’s the back story:

Fann’s lawyer warned Maricopa County Friday morning that the five County Board supervisors and county elections director would be subpoenaed Monday for “live testimony” if they didn’t hand over certain election materials to the audit team.

The County Board’s lawyer’s response at the end of the day: We can’t do it.

“The Senate Republican Caucus’ audit of the Maricopa County votes from last November’s election has no stopping point… The current course is mind-numbingly reckless and irresponsible."

At issue are the county’s computer network routers, as well as passwords to ballot tabulators used at vote centers. Both were among the long list of election materials subpoenaed in January by the chairman of the Senate Judiciary Committee.

Penzone argues that handing over the routers would expose private law-enforcement information.

The county’s lawyer says the security of all operations for the fourth-largest county in the country would be at risk if the routers were turned over.

Why does Senate GOP want routers?

Bennett, the audit liaison, says the routers are needed to test another conspiracy theory -- whether the county’s ballot tabulators are connected to the internet.

“Well, there are people that have always suspected something nefarious about elections being connected to the Internet," Bennett said Saturday to audit pool reporter Dan Zak of the Washington Post. "And so I think that's why the request was made.

An independent audit done for the county earlier this year found there were no connections to the internet.

As for the passwords, the county says it doesn’t have them.

If Fann pursues the routers, a court fight appears likely - either by the County Board or the sheriff.

Chris Krebs, the former director of the Cyber Security and Infrastructure Security Agency at the U.S. Department of Homeland Security, tweeted that if the demand for the routers isn't withdrawn, it will be a sign that the audit team is "seeking to disrupt ops & have no idea what they're doing."

I’m assuming the demand is based on lack of understanding of how AZ state/county systems work. I’m hoping they’ll withdraw. If not, its the equivalent of ransomware or denial of service attack. It’ll be a tell that they’re seeking to disrupt ops & have no idea what they’re doing. https://t.co/QPiKDNlawf

Fann appeared to back off the piece of the audit that’s come under the most strenuous legal attack: a plan by the audit leader, Florida-based Cyber Ninjas, to canvass voters’ homes in areas of Maricopa County where there were alleged voting “anomalies.”

The canvass is tied to another set of conspiracy theories: that there were large numbers of “dead voters” and that early ballots were sent to addresses where there were no voters.

In her response to the U.S. Department of Justice, Fann said:  “The Senate determined several weeks ago that it would indefinitely defer that component of the audit.”

But Fann went on, for the first time, to lay out procedures the auditors would follow if the Senate did decide to canvass voters.

The DOJ’s letter to Fann warned that a voter canvass might violate federal laws against voter intimidation.

The canvass was outlined in Cyber Ninjas’ plan for the audit in March. This is the first time Fann has indicated the plan was on hold.

Hobbs vs Bennett: It’s her move

Democratic Secretary of State Katie Hobbs and audit liaison Ken Bennett, who is a former Republican secretary of state, had a frank exchange of views last week over the audit. What comes next?

Hobbs’ letter listed 13 failings of the Senate Republicans’ audit, as determined with the help of Hobbs’ observers at the audit site.

Hobbs concluded by urging Bennett: “Either do it right, or don’t do it at all.”

Bennett had 48 hours to respond, under terms of a court settlement.

He returned fire: “Your bias is being transmitted through the observers you send.”

As of Friday, Hobbs’ legal team was weighing its response.

The court settlement allows Hobbs to return to court to try to compel Bennett to make changes in audit procedures.

Arizona Senate Republicans’ audit has been a test lab for unfounded conspiracy theories. The search for “bamboo ballots” is now the symbol of the audit for much of the country.

John Brakey, a progessive Democrat from Tucson who is known in Arizona for floating his own election fraud theories, told audit pool reporter Dennis Welch of KTVK-TV last week that a “forensic analysis” was being done on the Maricopa County ballots to detect any bamboo fibers.

“There are accusations that 40,000 ballots were flown into Arizona and it was stuffed into the box,” Brakey said. “And it came from the southeast part of the world, Asia. And what they’re doing is to find out if there’s bamboo in the paper.”

Brakey added: “They use bamboo in their paper processing, people in southeast Asia.”

For the record, Brakey said he didn’t buy the theory.

Brakey had first mentioned the bamboo ballot theory at a news conference with Bennett in late April.

The theory was a centerpiece of a Pinal County court filing last December that challenged the 2020 election results. Conspiracy theorist Staci Burk described a recording of a Southeast Asian airliner dropping off ballots on Election Night at Phoenix’s Sky Harbor Airport.

Burk’s challenge was tossed out by lower courts. Earlier this month, the U.S. Supreme Court refused to hear it.

Keep track of the latest developments from the Maricopa County election audit on the 12 News YouTube channel: