Ballots will be moved into building not recommended for use in May. Plus 4 other things we learned about Arizona's audit 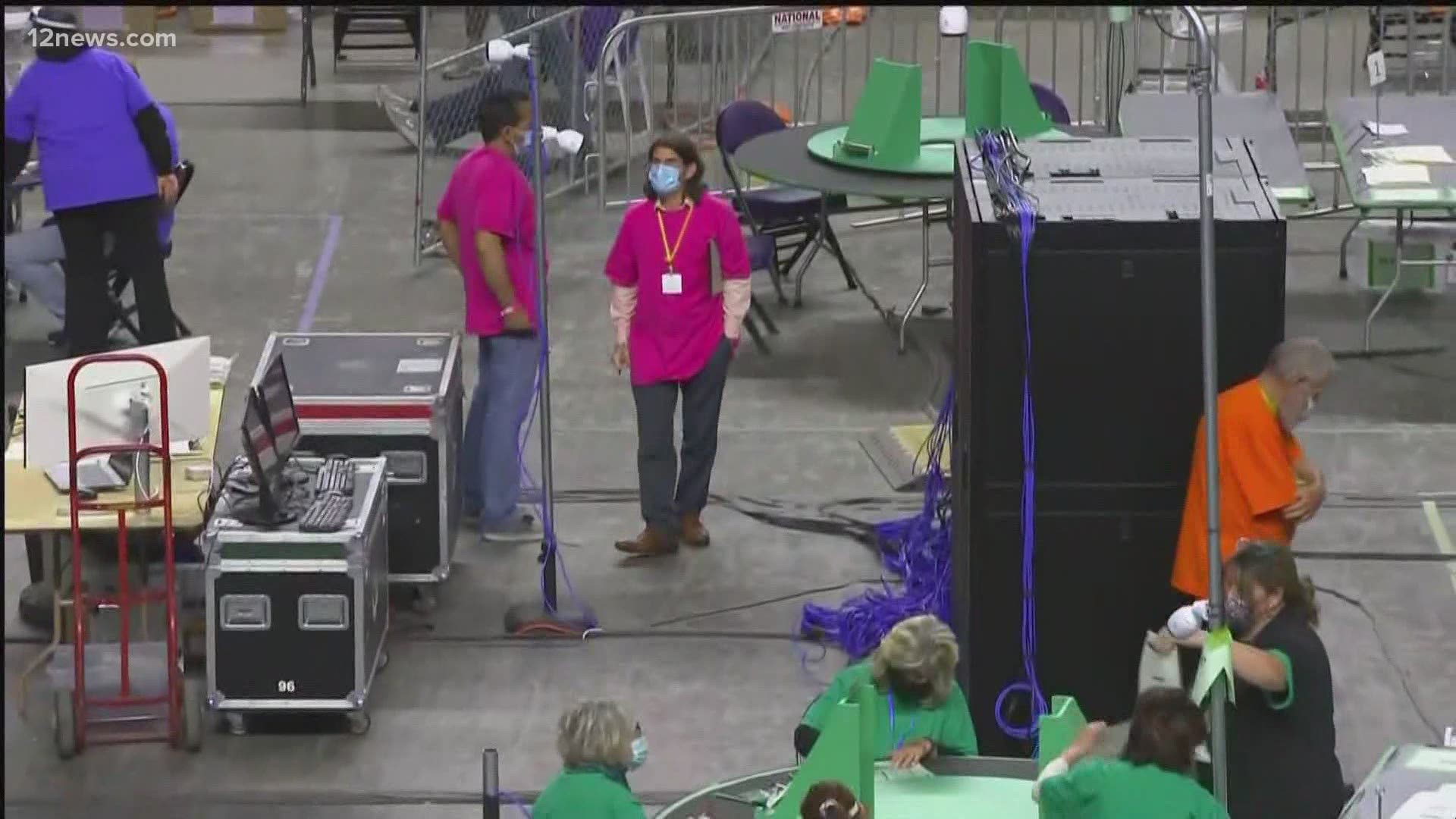 PHOENIX — There were new developments on several fronts Wednesday in Arizona Senate Republicans' 3-week old audit of the 2020 election.

The most visible part of the audit - a live-streamed hand count of the 2.1 million Maricopa County ballots in the races for president and U.S. senator - will take a 10-day break Friday.

12 News obtained the Senate's rental contract showing where those ballots will be moving during the break: from Veterans Memorial Coliseum across the State Fairgrounds to the Wesley Bolin Building - named after a former governor who died after just five months in office.

The building has another notable feature. The Arizona State Fair, which runs the site, says: "Due to temperatures during the summer months, this building is not recommended for use between May through September."

Whoa— @brahmresnik w/this context on the facility where the #AZAudit ballots will be stored for a week: https://t.co/6W392WH81t

Here are four other things we learned Wednesday:

Senate Steps Back From Brink

Senate Republicans' battle to obtain Maricopa County's routers took a step back from the brink.

Rather than subpoena County Board members to explain their refusal to uphold a separate subpoena for the routers, the Senate instead invited its county brethren to a live-streamed public meeting to discuss three issues - two of the new issues that arose in the past 24 hours.

The Senate Republicans want the routers -- the backbone of the county's computer network - in order to test a conspiracy theory that outsiders could hack into the ballot-counting machines used in the presidential election.

An independent audit has confirmed the machines have no internet connections.

We await the County Board's RSVP - or not.

Why Was Router At Audit Site?

In the irony department, an audit observer discovered a wi-fi router on a server at the Senate Republicans' audit site.

If it were placed into use, the router could expose the audit team's computers and servers - loaded with voter and ballot information - to hackers, according to Ryan Macias, a national election security expert and the observer who discovered the router.

Macias is part of the observer team assigned to the audit by Secretary of State Katie Hobbs.

"I did my job as an observer to identify a known vulnerability or potential risk," Macias told 12 News. He said the router shouldn't have been in the building.

UPDATE: The WiFi capable router remains connected to servers, despite assurances that it would be removed.

Observers also noted that partisan activist Randy Pullen unlocked and accessed one of the ballot cages. Bennett has repeatedly said he is the only one with access. https://t.co/rX3EMyAHnr

The audit's Twitter feed said the router wasn't enabled. Senate audit liaison Ken Bennett said he didn't know why the router was there in the first place.

Secretary of State Hobbs' spokeswoman said late Wednesday that she never received an explanation for the router from the audit team leader, Florida-based Cyber Ninjas.

The audit's long-awaited temporary staffers are starting to show up.

A group of about 30 people could be seen on camera after lunch getting a tour of the audit space on the coliseum floor. They walked to a remote corner of the floor, where they donned the brightly colored T-shirts that designated their task with the hand count.

Bennett said they were the second group of 30 workers who've joined the ballot count in recent days.

The 16-day-old hand recount still had a big mountain of ballots to climb.

Timeline Much Longer Than Projected

The recount timeline is much longer than Cyber Ninjas' estimated in its contract with the Senate.

Under the original estimate, the recount would have been over this week.

But based on the current ballot-counting pace, the hand count of the estimated remaining 1.7 million ballots could extend until Labor Day.

The new reinforcements should shorten that timeline.

Bennett's estimate Wednesday, however, appears overly optimistic. (There have never been any precise, documented metrics for ballots counted.)

"With the new people they are hiring and training, and if we come back after the break with the tables full ... it should take between 14 and 16 days," Bennett told audit pool reporter Kyung Lah of CNN.

Achieving that goal would require a ballot-counting rate of about 100,000 a day, more than five times the current rate.

Chairman @jacksellers responds to "false and ill-informed" allegations from Arizona Senate and Senate audit account. "It's clearer by the day the people hired by the Senate are in way over their heads." Full statement below: pic.twitter.com/kBkVKgbEcD

The recount of the presidential race is popular among Republicans

Many Republicans believe, without any evidence, that Donald Trump - not Joe Biden - won the Maricopa County vote.

Biden was the first Democratic presidential nominee to win Maricopa County in 72 years and the second to win statewide during the same period.