Arizona's audit of fall presidential election could drag into summer. Will taxpayers get stuck with the bill?

Temporary workers are being hired to help pick up the pace of Senate Republicans' ballot recount. 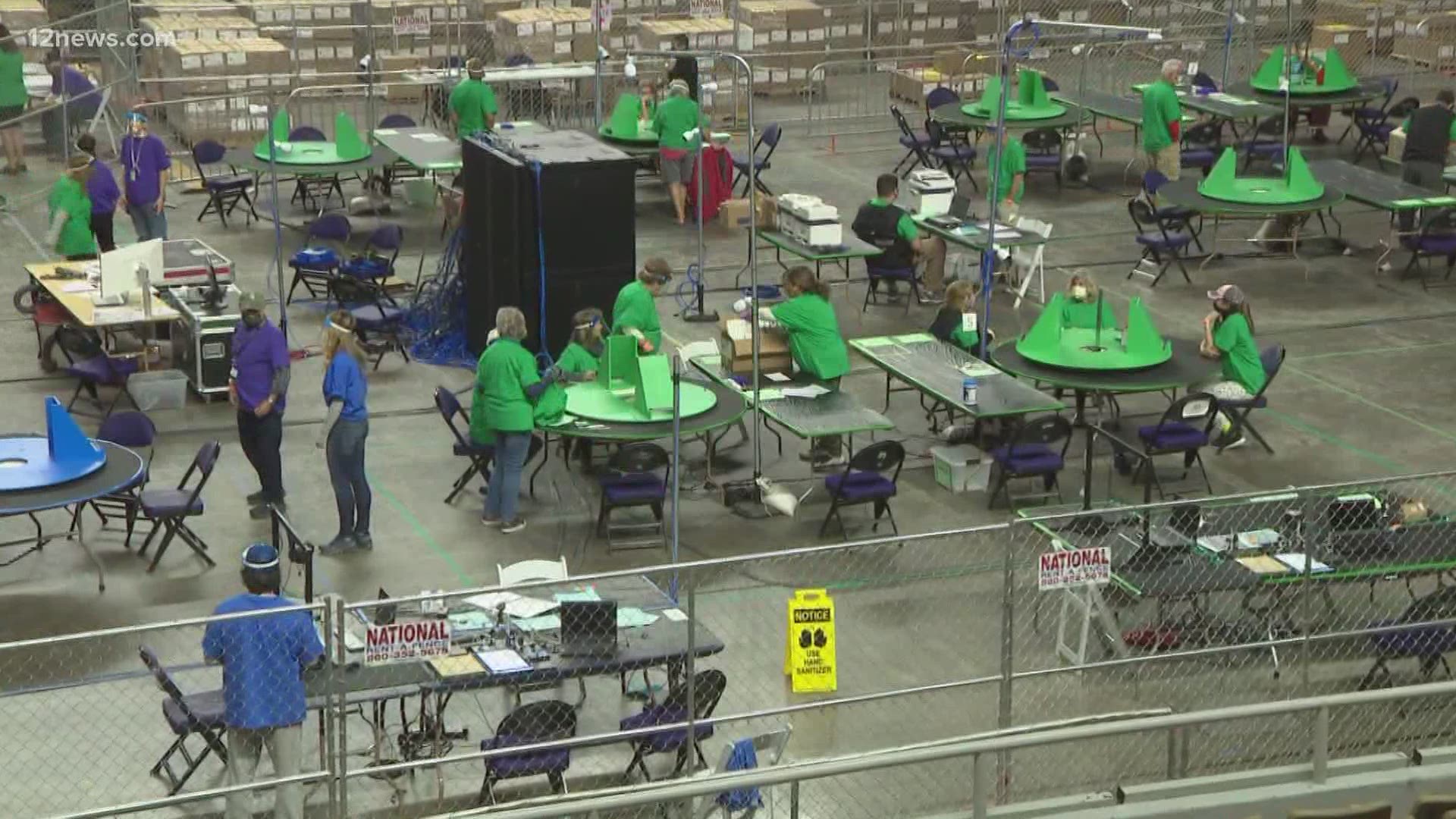 PHOENIX — The Arizona recount of last fall's presidential election is now poised to drag into the summer, after Senate Republicans had forecast wrapping it up in the next 10 days.

The recount's glacial pace over its first 10 days has forced the Republicans' audit team to double the number of ballot counters, by hiring temporary workers.

Taxpayers won't have to foot the bill for the temps, according to the Senate audit's spokesman.

But the audit's major funding sources don't have to reveal who did pay the bill.

The ballot recount at brightly colored tables on the floor of Veterans Memorial Coliseum is the most visible part of the Senate GOP audit.

Backing off May 14 target

Senate President Karen Fann rented the coliseum through May 14 for a recount and examination of 2.1 million Maricopa County ballots.

Ken Bennett - the Senate audit liaison, a former secretary of state, and a longtime Prescott friend of Fann's - said an estimated 175,000 ballots, perhaps 200,000, ballots had been counted.

At a best-case rate of 20,000 ballots counted per day, given current resources, the count would take about 100 more days.

Last week, Bennett had told reporters the hand count would be done by May 14.

Now, he has a different outlook.

"Accuracy is much more important than speed," he told 12 News.

Bennett said the temp workforce of about 60 people would allow the audit team to add a third shift.

"They've got 46 stations ready instead of the 20," he said. "As soon as the personnel can fill them we will."

The May 14 deadline was significant because two-dozen Phoenix high schools will hold their graduations at the coliseum the following week.

"The facility has told us that if we had to stand aside for five days for the graduation, we could come right back in and have as much time as we need," Bennett said.

A spokeswoman for the State Fairgrounds could not confirm any new agreements to extend the Senate's rental.

A county spokesman didn't indicate there were any objections to the audit team holding on to the ballots longer.

What taxpayers are spending

Here's what we know about who's paying for what:

Tax dollars to Cyber Ninjas: The lead contractor, Florida-based Cyber Ninjas, is being paid $150,000 in tax money from the Senate budget, controlled by the Republican majority.

The coliseum rental covers the cost of keeping the lights on and cleaning the facility - about $1,000 a day, Bennett told the Arizona Capitol Times' Dillon Rosenblatt.

The Senate is also paying for security, provided by paid off-duty law enforcement and the volunteer Arizona Rangers.

The Rangers have reaped a financial bonanza thanks to their presence at the audit site. To date, the Rangers' GoFundMe page has raised more than $172,000.

Regarding any other expenses, like the temps, "That's up to the contractor," Bennett said.

$1 million-plus from outside groups

The Senate contribution is dwarfed by two unprecedented funding sources that have no connection to the Legislature.

Both organizations are led by people who promote the falsehood that the election was stolen from Donald Trump:

Cable channel connected: Christina Bobb, a personality with the far right wing One America News Network, is in Phoenix to broadcast reports on the audit, while she and two colleagues raise money for the audit.

Bobb tweeted a month ago that her fund-raising organization had reached its first $150,000 goal. Now she's asking donors for another $150,000.

Byrne's FundTheAudit.com, promoted by the Senate GOP's Twitter account, has a $2.8 million goal for the "Maricopa County audit." It's pulled in almost $1.3 million to date, according to a counter on the site

Byrne claimed in a post on the messaging site Telegram that a million dollars of that money was his.

Not required to disclose donors

The IRS doesn't require the organizations to reveal the names of any audit donors. Under the tax code they are 501(c) 4 non-profit organizations that "promote social welfare."

Arizona Senate Republicans are breaking new legal ground, attorneys say, by contracting for a legislative function that will be almost entirely paid for by undisclosed donors to a third party.

State statute does authorize the bipartisan Legislative Council to accept and spend public and private gifts in the Legislature's name. The vehicle apparently hasn't been used.

"Whatever process exists for those organizations to disclose their donors, we'll apply to this situation, as well," Bennett said.