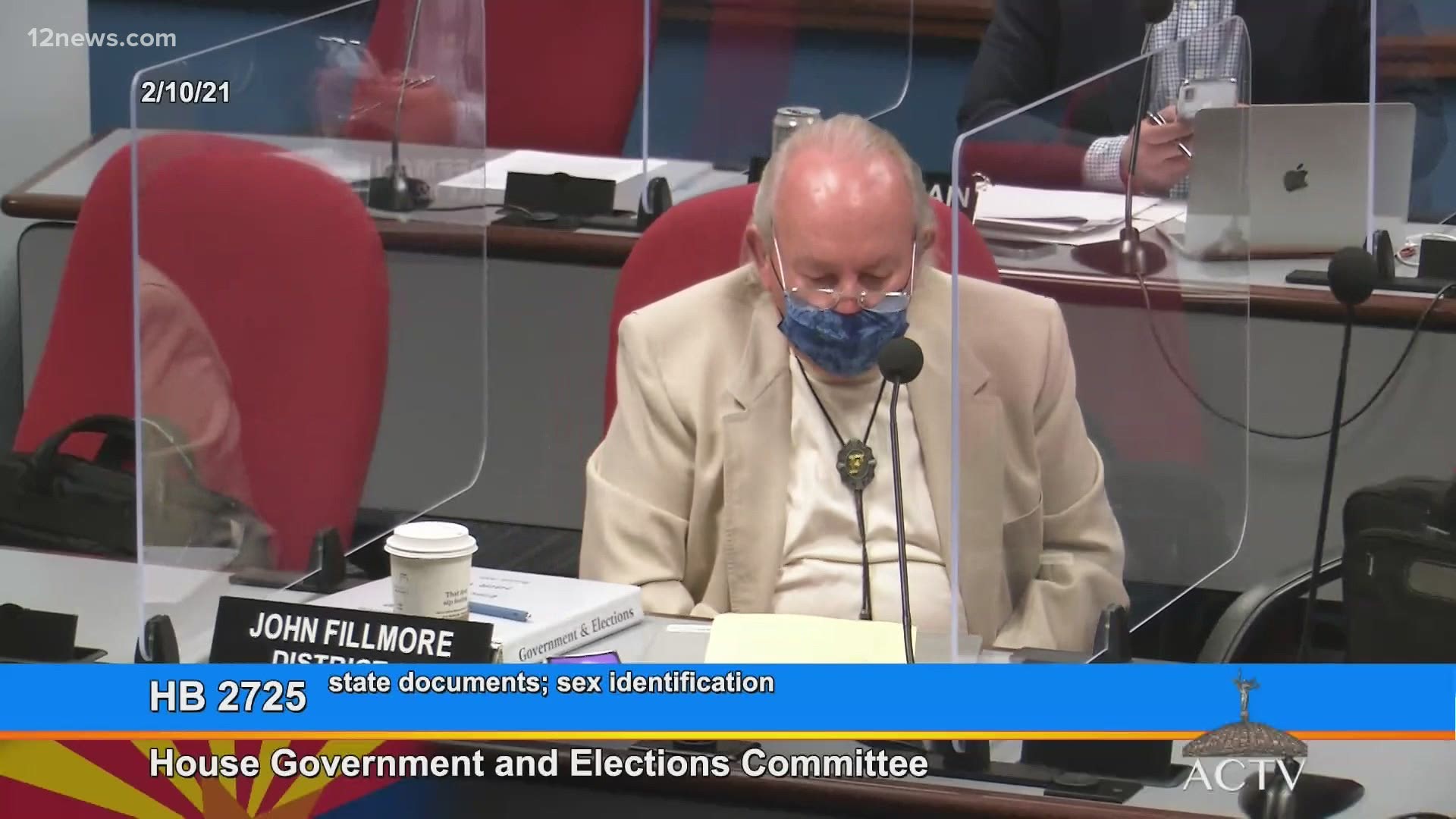 Tucson mother Megan Mogan was literally shaking when she heard the words of an elected representative compare her 15-year-old child to a barnyard animal.

“It’s dehumanizing any trans or non-binary person in their state,” Mogan said.

On Wednesday, Mogan and other Arizona parents virtually attended the state's House Government and Elections Committee to provide public comment on House Bill 2725.

The bill is sponsored by Republican state Rep. John Fillmore of District 16.

House Bill 2725 calls for any document issued by any agency, board, commission or department of Arizona to only indicate an individual's gender as either male or female.

Before his vote, Fillmore explained why he is introducing the legislation in Arizona.

“I proposed this bill just to give clarity in government documents and was hoping to avoid the whole gender identity issue on the gender dysphoria,” said Fillmore.

"What’s going to happen when someday someone wakes up and they want to go to a far extreme and identify as a chicken or something for crying out loud. Where do we draw the line?”

Why some people have issues with HB 2725

The bill gives no option for people who identify as non-binary, a person who does not identify as male or female.

"Most people in Arizona, including myself, never thought about how our identity-related documentation spills into every facet of our life and every space we enter because we don't have to think about it," said Mogan.

It was not immediately clear if Fillmore understands the difference between someone who is transgender and someone who identifies as non-binary. In his reasoning, he stated he was "hoping to avoid the whole gender identity issue on gender dysphoria."

Identifying as transgender and non-binary are not exclusive, but not necessarily the same

A transgender person has a gender identity or gender expression that differs from the sex they were assigned at birth.

A person who identifies as non-binary has nothing to do with sex. Non-binary or gender-queer is a spectrum of gender identities beyond male or female social constructs.

Non-binary identities can fall under the transgender umbrella if a person identifies with a gender different from their assigned sex.

“Let’s be clear that a person can identify as male, female and non-binary, that’s just a simple self-identification. When you talk about transgender, that’s moving from one gender to another,” said state Rep. Stephanie Stahl Hamilton.

Stahl Hamilton sits on the Government and Elections Committee and was moved by both Megan and other parents' comments against HB 2725.

"I was angry. There were three moms who made themselves very vulnerable and put their families in the public arena by sharing their very personal experience as to why a bill like this can be hurtful and detrimental for their children's well-being," said Stahl Hamilton. "This is a harmful bill."

Why can bills like HB 2725 be harmful to LGBTQ+ youth

Here is what the report found:

“When you don’t have proper identification it opens children, and any trans or non-binary citizen, up to harm and discrimination," said Mogan.

An ethics complaint has been filed against Fillmore. The complaint read in part:

In a statement to 12 News, Fillmore said:

“The complaint is entirely without merit, and it’s rather unfortunate that some opponents of the bill have unfairly and grossly mischaracterized my comments at Wednesday’s hearing. I invite people to listen to my actual remarks, which do not remotely match the distorted version critics have alleged.”

Beyond his comparison of transgender and non-binary people to chickens, Fillmore said that he "did not want to tear them down or insinuate one way or another." He continued by saying, "What I'm trying to do is give clarity to our government that when we give identification on a driver's license where a police officer is told to look for a male or something, things of that nature."

But then went on to talk about "gender dysfunction" pushed by people on the left allowing men to enter into the restrooms of little girls and creates situations he doesn't think are "beneficial to society and the nuclear family as a whole."

The claim of sexual predators taking advantage of laws and policies covering transgender or non-binary people to attack women and children in bathrooms has been widely debunked for years and there is no evidence they lead to attacks in public facilities.

A mother's plea to Arizona legislators

"What we are asking for is not taking away anything from anyone else. It is telling non-binary kids, citizens, we see you, you exist and you’re included in our state,” said Morgan.