Allister Adel says she's back on the job '110 percent.' New timeline shows she suffered head injury 9 days before she was rushed to hospital on Election Night. 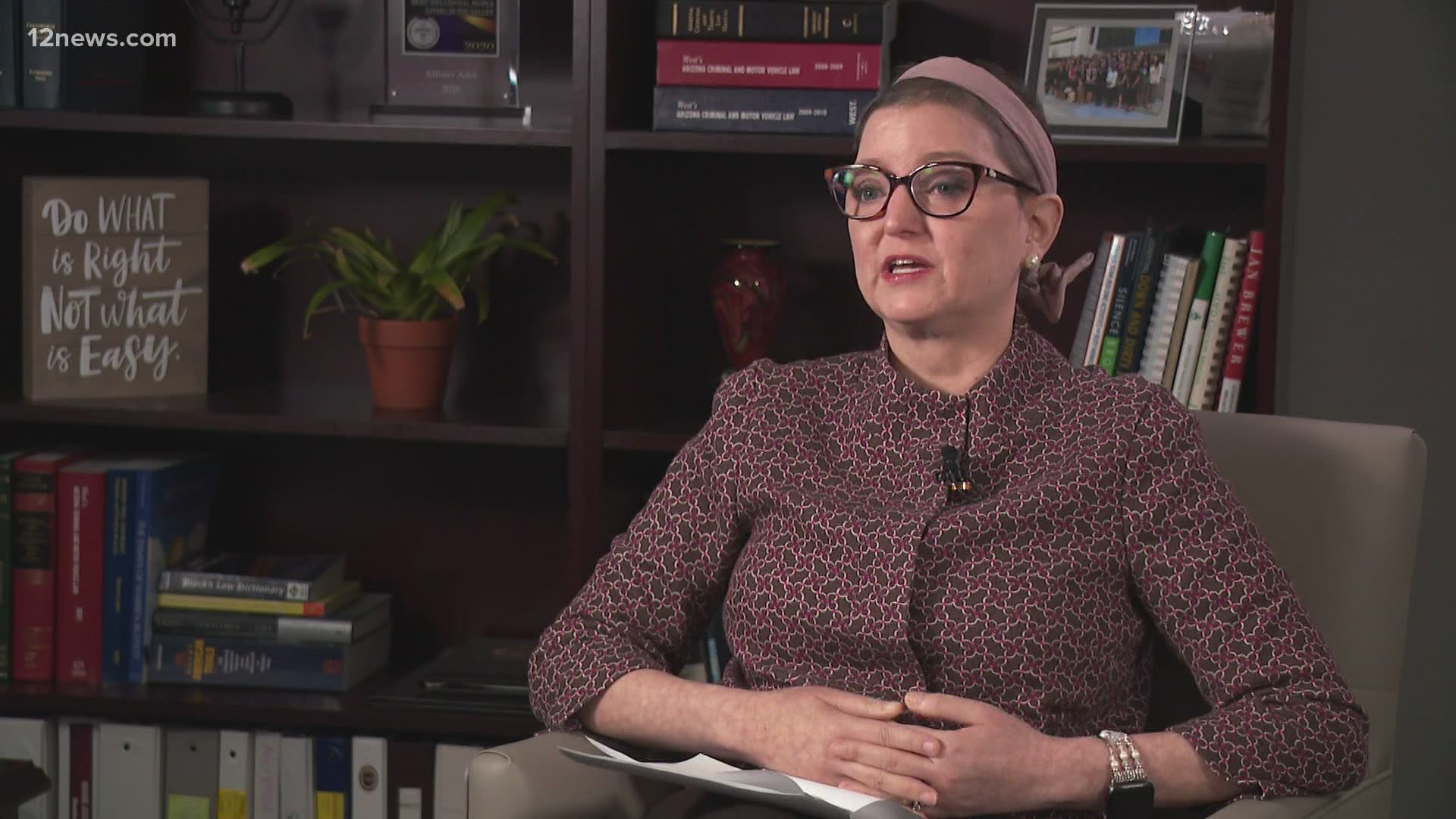 "I was sleeping for the first couple of weeks (after surgery). I really wasn't aware of the severity until after the fact," Adel said during an interview at her downtown Phoenix office in the county's criminal justice complex.

"It really took a toll on a lot of people to hear that. I am so grateful for the love and support that I had, and the amazing medical care that I got."

Adel, who is 44, showed few after-effects from two brain surgeries over the last three-and-a-half months.

Adel had emergency surgery Nov. 3 for a blood clot in her brain, the result of a fall that occurred nine days earlier, according to a new timeline provided by her office.

"I did previously have a clotting disorder that I manage, and they removed the clot," she said.

She was hospitalized for two months, much of that time in neurological intensive care at Phoenix's Barrow Neurological Institute, she said.

There was follow-up surgery in early January to replace a piece of her skull that had been removed during the first operation, in order to relieve pressure on her brain.

Doctors told her "you're going to see improvement every single day," Adel recalled. "I didn't buy that. There's no way you just drilled into my head ... (but) they were right."

Adel, a Republican former county prosecutor who was appointed county attorney in the fall of 2019, said she found out she won her election the week after Election Day.

"In the hospital, post-surgery, my husband said, 'You won!' Adel recalled. "It was definitely a surreal experience."

She is the first female elected county attorney in Maricopa County history, overseeing the third-largest prosecutorial office in the country.

Adel and her husband have two sons, ages 9 and 10. She missed her sons' birthdays and Christmas with them.

"They're so kind and loving, they just loved on me and hugged me a lot when I got home, and we talk about it," she said.

"We talk about what happened to mom, I make sure they're involved with that, and we're back to doing all the great things we did before."

After our interview, Adel's communications director, Jennifer Liewer, provided the first timeline of her injury and subsequent surgeries.

It shows that Adel struck her head during a fall at home nine days before she was rushed to the hospital for surgery.

"It's not the most glamorous story," Adel said during our interview.

"I was trying to plug in a light in my bedroom ... and I had my Zoom station set up right next to this light. I tripped on the bottom of the table, the leg there, and I fell and hit my head.

"At first I just thought, 'Ow, this kind of hurts.' Then my husband started noticing some other symptoms and we went to the hospital."

Here is the timeline provided by Adel's office:

Wednesday, Oct. 28: Her husband drove her to a hospital, where she was admitted as a precautionary measure.

Saturday, Oct. 31: She was released from the hospital. While in the hospital, she was alert and continued working virtually, according to Liewer.

Tuesday evening, Nov. 3: Adel was unresponsive and was transported to a hospital for emergency surgery. She was later transferred for care at Phoenix's Barrow Neurological Institute.

Monday, Jan. 4: Adel returned to Barrow for surgery to replace the portion of her skull that had been removed on Nov. 3. She was hospitalized for three days following that surgery.

Liewer said via email that during the period between Adel's fall and her emergency surgery - the nine days from Oct. 25 to Nov. 3 - "she was never under sedation or unable to conduct the duties of her office."

Get the latest in Arizona's political news at our 12 News YouTube channel here.