Sluggish count of 2020 vote has been plagued by lack of volunteers. New spokesman says 260 were trained last week. But how many will show up? 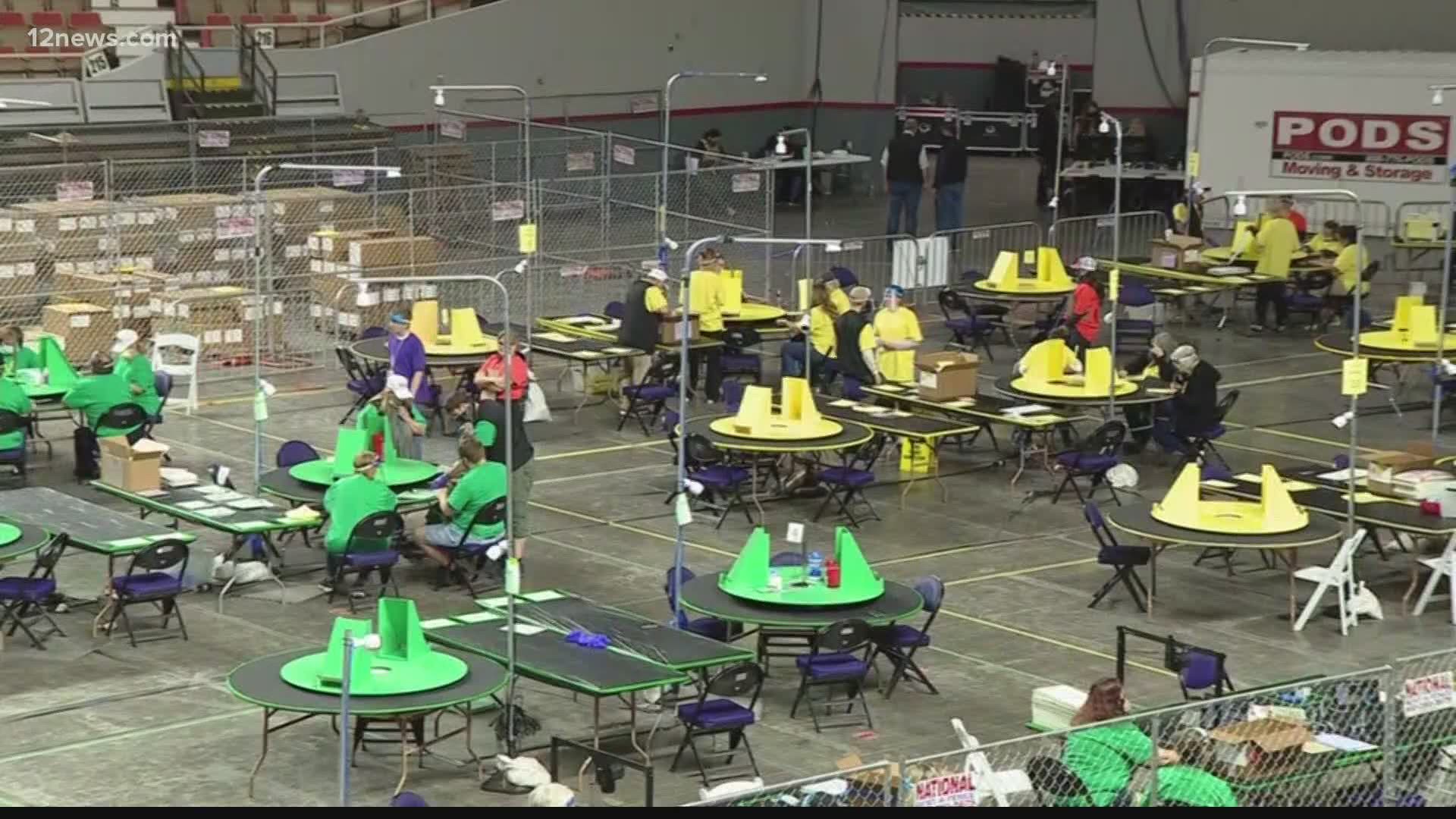 Here's what you need to know as the recount resumes at 8 a.m. Monday.

All of the 2.1 million election ballots, plus election computers and other equipment handed over by Maricopa County, have been returned to Veterans Memorial Coliseum from their temporary home in semitrailers at another building on the State Fairgrounds in Phoenix. Phoenix high schools had a contract to use the coliseum for graduations all of last week.

How Much Longer Will Audit Last?

There is no hard end date for the partisan audit.

Logan said last week at a live-streamed meeting with Fann that the recount would be over by June 30.

It's difficult to independently confirm that.

It was clear to media observers early on that there weren't enough ballot counters to meet the audit team's stated goal of finishing the count by May 14.

There are an estimated 1.6 million ballots left to count, according to the Senate audit team. But that the ballot count total might not be reliable.

Randy Pullen, a former Arizona Republican Party chair who is the new media contact for the audit, said via text message that he intended to do a daily count of processed ballots.

Based on the latest audit team estimate, 27,000 ballots a day were counted in the first 19 days.

The counters would have to double that daily rate to review all the ballots by June 30.

Pullen said 260 volunteer ballot counters were trained last week. He didn't know how many would show up Monday.

A week ago, Senate audit liaison Bennett said the goal was to bring on more temporary paid staffers. Pullen indicated that's taken a back seat.

“We have so many volunteers still to be (trained)," he said, "but are considering some additional paid staff."

Pullen said he was trying to find out how many counting tables would be filled Monday, but he added that the audit was sticking with the two shifts per day that were operating before the layoff.

Who's Recruiting the Volunteers?

The Arizona Republic reported last week that the lead public fund-raiser for the audit is also helping to decide which volunteers will count the ballots.

Several weeks ago, Trump defender and former Overstock.com chief executive Patrick Byrne claimed he donated $1 million toward a campaign whose goal is raising $2.8 million for the Maricopa County audit ($1.73 million has been raised so far).

The fundraising website has also been recruiting volunteers for the audit. An email obtained by the Republic shows Byrne's America Project will handle background checks, non-disclosure agreements and volunteer agreements of audit workers.

Who's Running the Audit?

Senate President Karen Fann has outsourced the audit she authorized to private entities that have either declined to abide by the kind of disclosure rules required of public bodies or aren't obligated to do so.

Byrne's fund-raising outfit is organized as a non-profit that isn't required under Internal Revenue Service rules to reveal its donors. His apparent human resources function is also cloaked in secrecy.

When 12 News asked Cyber Ninjas' Logan who was paying for the audit, he declined to answer, claiming that his contract with the Senate barred him from talking to the media. There is no specific clause in the contract that says that.

Fann, who authorized the audit, said via text Sunday that Pullen was helping Senate audit liaison Ken Bennett with responding to the media.

"Ken was being called and texted dozens of times a day, which took a lot of his time away from helping coordinate the vendors, security, facilities, and Maricopa County," Fann texted. "Randy will now triage all the media and work with Ken to keep you all informed."

Bennett made himself available for interviews with pool reporters at the coliseum. All media calls are now directed to Pullen's cell number.

Pullen was chairman of the Arizona Republican Party from 2007 until 2011. He is a longtime party activist and a former candidate for Phoenix mayor.

Pullen has been visible walking the coliseum floor during the audit. At one point, Bennett handed Pullen the key to the fenced area where the ballots are kept.

The Maricopa County Board, which oversees county elections, bookended the past week with broadsides against Senate Republicans:

-On Monday, a scorching letter called on Fann to end the audit. "Your 'auditors' are in way over their head," the board wrote.

-On Friday, the board issued an ominous warning to Fann and the audit contractors: Retain all audit documents, because they might be sued when the audit is over.

Legal analysts and county insiders doubt the board will initiate any legal action while the audit is ongoing.

NEW Maricopa County Board sends AZ Senate president & audit contractors "hold letter" to retain all documents because they might be sued. Letter follows up on Board Chair Jack Sellers' threat Monday to sue when audit over. Sue for what? (more)https://t.co/JGpeUmH3cG

Will Senate Have to Buy New Machines?

Democratic Secretary of State Katie Hobbs told the County Board it would have to obtain new ballot-counting machines after the Senate Republicans' audit team examined the machines in private.

The former top election security official for the U.S. government agreed with Hobbs.

"I've never experienced a situation like this before," Matthew Masterson said in an interview. Masterson was the top elections security adviser for the Cybersecurity and Infrastructure Security Agency.

The Republican-controlled Senate and taxpayers could suffer a financial hit from Hobbs' decision.

In a last-minute agreement before the county agreed to ship election materials subpoenaed by the Senate,  Fann signed a document indemnifying the county against any lawsuits or financial claims arising from the Senate's possession of the machines. The Senate would also have to cover the county's expenses if the machines were damaged.

Maricopa County leased a suite of election equipment - including the ballot-counting machines - from Denver-based Dominion Voting Systems under a three-year, $6.1 million contract. The county hasn't examined the machines yet.

Any claim by the county would likely have to be resolved in court.

Why is Senate GOP Doing an Audit?

The hand recount of Maricopa County's presidential and Senate ballots is the most visible piece of Senate Republicans' audit.

The audit team is also doing:

Fann has said that the audit is needed to respond to the thousands of voters who have contacted Republican lawmakers with questions about the election.

The audit marks the first time one of Arizona's legislative chambers has undertaken its own review of election results. Maricopa County's own audits, as well and independent audits found no wrongdoing in the election.

The audit grew out of Republican lawmakers' push to overturn the election results in the wake of President Donald Trump's defeat last November.

Lower court judges upheld the Senate's authority to conduct an audit. One of the judges agreed the Senate subpoenas were legal.

The Republicans' audit won't change the outcome of the vote in Maricopa County, Arizona's largest county and, for the first time in 2020, a swing county that helped deliver the White House to Democrat Joe Biden. Biden was the first Democratic presidential nominee to win the county in 72 years.

Trump has issued emails egging on the audit, in the unfounded belief it will undo the 2020 election results.