Woman who moved from Phoenix now helping out freezing Texans

In the town of Glen Rose, an inn owned by a former Arizonan has become an ad hoc shelter. 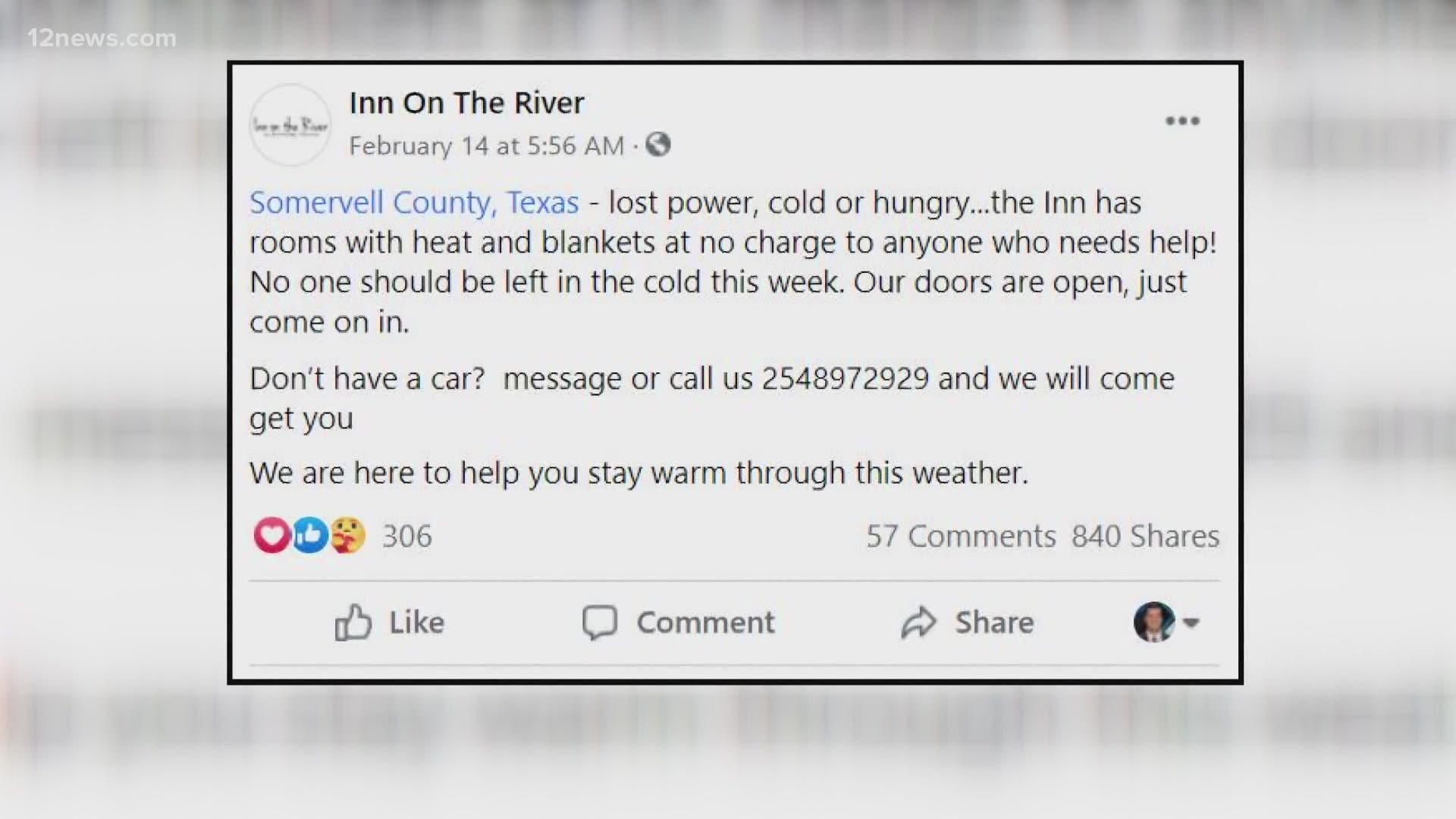 PHOENIX — A former Valley hospitality worker has become a hero to dozens in her small north Texas community as a winter storm ravages the area.

Millions of Texans have been without power for hours and even days after a major winter storm swept through the state.

Temperatures have been consistently in the teens in a place where winter temperatures are usually closer to 40 degrees.

In the town of Glen Rose, southwest of Fort Worth in Somervell County, the Inn on the River has become an ad hoc shelter.

Pamela Streeter bought the inn in 2019 after moving to Glen Rose from north Phoenix, where she worked in the hospitality industry.

Prior to leaving the Valley, Streeter had managed hotels in New York and Washington, D.C., so she knew how to handle a blizzard, whereas many Texans did not.

RELATED: How you can help the millions in Texas who don't have power, heat or safety

“We have a lot of people who live in RVs or trailers, and the temperatures were down to 17 degrees – inside,” Streeter said via video call Thursday. “We’ve had a number of elderly people that were brought into us that were near hypothermic."

The idea to open up the Inn came as Streeter’s guests canceled their Valentine’s Day reservations ahead of the impending storm. The Texas power grid has experienced a multisystem failure due to frozen infrastructure and skyrocketing demand.

Utility providers at first instituted rolling blackouts of about 45 minutes, but some Texans have gone without power for anywhere from hours to four days.

Sub-freezing temperatures have combined with the COVID-19 pandemic to create a situation where many just don’t have a place to go to stay safe and warm.

“We have a community of about 11,000 people and probably 80% of them needed help,” Streeter said.

The Inn on the River Facebook page advertised electricity, heat, warm rooms, showers, and meals on Valentine’s Day. Since that post went public, Streeter estimates that 128 people have spent at least a night in her inn, and 50 more have come inside just to get warm or have a meal.

“We just put out a simple Facebook message,” Streeter said. “We figured we’d maybe get five or 10 people that needed it, and we were just overwhelmed.”

Streeter told 12 News Thursday that Somervell County and the Red Cross have pitched in to help her help more people.

“Our resources have quadrupled, “ Streeter said. “We’re trying to just get as many people in and warmed up and figure out where they can go until their water’s back on or their power is back on.”