Our VERIFY team fact-checked what the candidates said during the Democratic debate in Ohio. 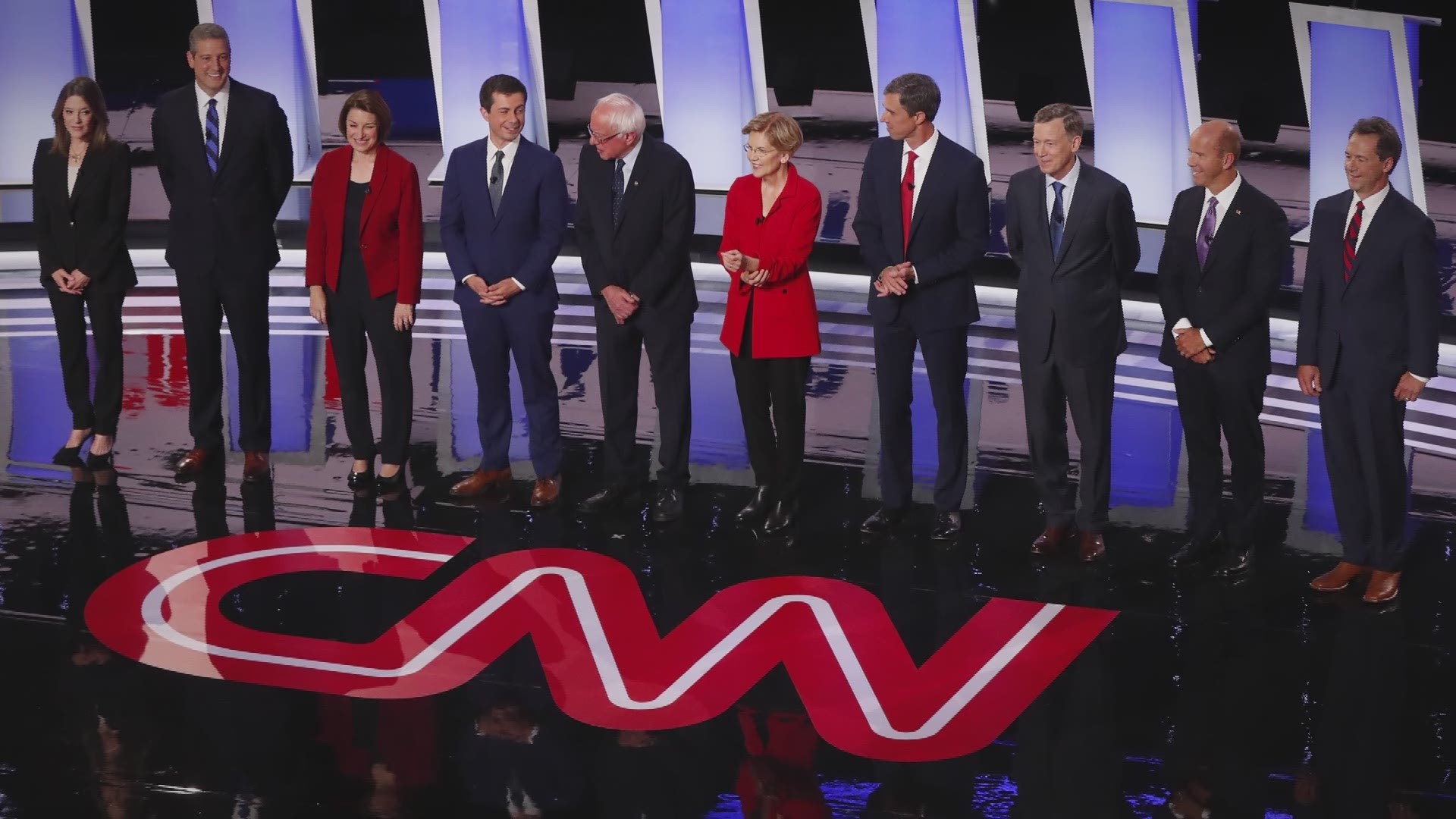 Twelve Democrats fighting for a chance to become the party's nominee met on the debate stage Tuesday night in Ohio.

It was the fourth round of debates for Democrats and was the most candidates on stage at once for a 2020 debate so far.

Our VERIFY researchers fact-checked what all the candidates had to say during Tuesday's debate.

CLAIM: Sen. Elizabeth Warren made the claim that two-thirds of families that wind up in bankruptcy due to health issues actually had health insurance.

This claim is MISLEADING. It is an accurate representation of findings in a widely-published study, but it extrapolates data that isn't there.

A 2018 study published in the American Journal of Public Health found that 66.5% of the bankruptcies in the United States were tied to medical issues. That number represented about 530,000 families that went bankrupt each year because of medical issues and bills.

The study found that one of the major causes of this wasn’t just the medical bills themselves, but that the participants insurance plans wouldn’t cover their full costs.

While it’s mentioned as a major cause, the study itself does not say that two-thirds of the families who went bankrupt had insurance plans of their own.

A Kaiser Family Tracking Poll out Tuesday has 73% of Americans favoring a government plan that would compete with private health care plans, with 24% against the idea.

Support for this has increased by 8% since the poll began tracking the question in July.

CLAIM: Sen. Bernie Sanders stated that the United States has the highest healthcare costs in the world.

Sen. Bernie Sanders stated that the United States has the highest healthcare costs in the world.

This claim lines up with previous studies.

A Kaiser Family Foundation analysis of OECD and National Health Expenditure data found that the United States had the highest health consumption expenditures per capita among countries with GDPs above the media. The United States spent more than $10,000 on health per person in 2017, according to their data. The next highest spender was Switzerland, which spent over $8,000 on health per person.

CLAIM: Senator Kamala Harris claimed that eight people will die from gun violence while Tuesday’s Democratic Debate is going on.

The senator is on the right track with this claim, but actually underestimated the number of deaths.

In 2017, the most recent year the CDC has data available on this, there were 39,773 firearm deaths. That’s about four and a half deaths per hour.

CLAIM: Julian Castro claimed that “Ohio, Michigan, and Pennsylvania actually in the latest jobs data have lost jobs, not gained them.”

The latest figures from the Labor Department show that the former U.S. Housing Secretary got this one wrong. Ohio, Michigan and Pennsylvania all added jobs in August. However, these states have faced some struggles.

Pennsylvania and Michigan have lost factory jobs since the end of 2018 and Ohio lost 100 factory jobs so far this year, data shows.

CLAIM: Andrew Yang claimed that Amazon is closing 30 percent of stores and malls across the U.S. This claim is misleading.

Andrew Yang returned to this familiar talking point to kick off his first response during the fourth Democratic Debate. He also brought this misleading claim up during the second debate, here’s why:

The number of retail stores in the United States is growing, according to Labor Department data.

While there were about 75,000 stores that closed in 2017, the total number of stores has since risen.

There is no evidence to support the claim that it’s Amazon or other online retailers that are responsible for store locations shutting down across the country.

CLAIM: Senator Cory Booker said that “we are in a state (Ohio) that has had two Planned Parenthoods close.”

This claim is VERIFIED.

In early September, two Planned Parenthood clinics announced that they were closing. They closed on September 20th.

Planned Parenthood explained, in a release, that the closures were the result of “relentless state and federal attacks against reproductive health care.”

The two locations closed were the “Springdale” and “Western Hills” locations.

CLAIM: Former Vice President Joe Biden said that troops under Syrian President Assad had fired on US troops now being pulled back from Syria.

This claim is FALSE.

Biden mentioned Iraq here, which seems to have been a simple misspeak. He does, however, directly mention President Assad and said the Syrian leader’s troops had fired on U.S. troops as they retreated from the region.

There’s no evidence or reports to support this claim. There were some earlier reports that US troops had mistakenly been targeted by Turkish forces as they made military moves into the region, but troops have not been fired upon by Syrian forces.

CLAIM: Congresswoman Tulsi Gabbard called the situation in Syria a “regime change war” and challenged other candidates about why they don’t call for it’s end.

The claim that the U.S. presence in Syria was part of a “regime change war,” is FALSE.

While the conflict in Syria could reasonably be called a “regime change war,” the U.S. involvement in the country was not related to that conflict.

Leaders at the time, including then-President Obama and Vice President Joe Biden, decided to send troops to the region to help Kurdish groups who were fighting ISIS.

The U.S. only sent a small number of ground troops to the region to act as support staff.