Mangkhut has weakened in China after sparking landslides and building collapses that killed dozens in the Philippines. 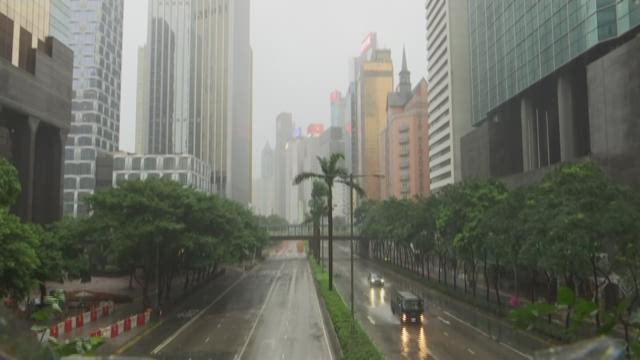 HONG KONG — Mangkhut weakened from a typhoon to a tropical storm as it moved deeper into southern China on Monday, leaving death and destruction from Hong Kong to the Philippines.

The storm was still affecting southern China's coast and the provinces of Guangdong, Guangxi and Hainan and rain and strong winds were expected to continue through Tuesday.

Hong Kong residents were told to stay away from the coastline and be on alert for occasional gales. Bus, ferry and rail services were suspended and almost 900 flights were canceled at the city's airport, one of the world's busiest. The South China Morning Post said Hong Kong's hospitals had to use backup power due to outages caused by the storm.

As of Monday morning Mangkhut was on track to pass over the Guangxi regional capital of Nanning and move toward the border with tourism powerhouse Yunnan province.

The Hong Kong Observatory reported Mangkhut was the most powerful cyclone to hit the city since 1979, packing maximum sustained gusts of 195 kilometers per hour (121 mph).

Typhoon Mangkhut barreled into southern China after lashing the Philippines with strong winds and heavy rain that caused landslides feared to have buried dozens.

That warning followed Mangkhut's devastating march through the northern Philippines on Saturday with sustained winds of 205 kilometers (127 miles) per hour. Landslides caused by the pounding storm hit two villages in Itogon town in the mountain province of Benguet.

Itogon Mayor Victorio Palangdan told The Associated Press by phone that at the height of the typhoon's onslaught Saturday afternoon, dozens of people, mostly miners and their families, rushed into an old three-story building in the village of Ucab.

The building — a former mining bunkhouse that had been transformed into a chapel — was obliterated when part of a mountain slope collapsed. Three villagers who managed to escape told authorities what happened.

"They thought they were really safe there," the mayor said Sunday. He expressed sadness that the villagers, many of them poor, had few options to survive in a region where big corporations have profited immensely from gold mines.

The rescue work halted for the night before resuming Monday morning. Men used pikes and shovels to dig into the mud since the soaked ground was unstable and limited the use of heavy equipment on site.

The typhoon was occurring as tropical weather also was devastating the southern U.S. Florence has dumped historical levels of rain on North Carolina.

Mangkhut made landfall in the Guangdong city of Taishan at 5 p.m. Sunday, packing wind speeds of 162 kilometers (100 miles) per hour. State television broadcaster CGTN reported that surging waves flooded a seaside hotel in the city of Shenzhen.

The storm shattered glass windows on commercial skyscrapers in Hong Kong, sending sheets of paper pouring out of the buildings, fluttering and spiraling as they headed for the debris-strewn ground, according to videos on social media.

Mangkhut also felled trees, tore scaffolding off buildings under construction and flooded some areas of Hong Kong with waist-high waters, according to the South China Morning Post.

Casinos on Macau were ordered closed for the first time due to the typhoon.