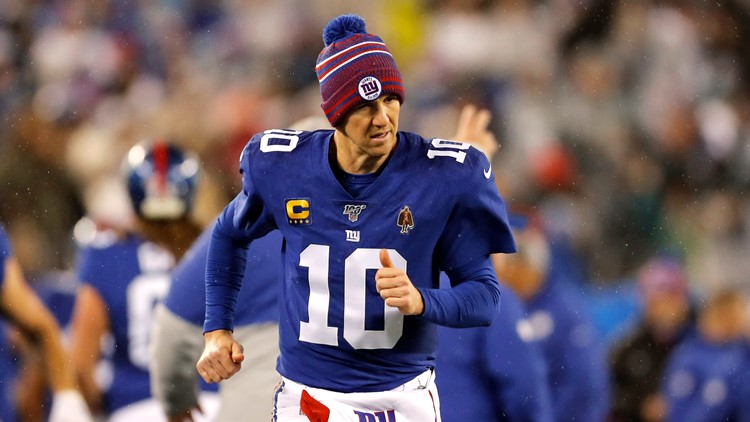 Photo by: AP
New York Giants quarterback Eli Manning (10) runs on the sideline in the second half of an NFL football game against Philadelphia Eagles on Sunday, Dec. 29, 2019, in East Rutherford, N.J. (AP Photo/Adam Hunger)

The team tweeted Wednesday afternoon that Manning is announcing his retirement, with a thank you hashtag for the man who brought the Giants two Super Bowl triumphs over the decade dynasty New England Patriots, in the 2007 and '11 seasons.

The Giants' post on Twitter confirmed ESPN's report that Manning would announce he's stepping away from the game.

Manning will hold a press conference on Friday marking the official end of his career.

The Ole Miss product spent all his seasons with New York after joining the team through a trade in the 2004 draft, which ended up with Philip Rivers to the Chargers and Ben Roethlisberger to the Steelers.

Jersey no. 10 threw for 57,023 yards and 266 touchdowns for the Giants, but his most notable achievements were winning the pair of championships and Super Bowl MVP awards in the process.

Tom Coughlin, who was Giants head coach from 2004-15, said of Manning that, "He's an incredible big- game performer. You talk about a guy that's great to coach, focused every day, took tremendous pride in preparing, practice, had a great sense of humor, was a cynic in the locker room. But the guys loved him and they loved him for it, and they played for him. The guys that had the opportunity to play with him know what it's like to be with a guy with as much talent, as much grit, as much determination."

Manning never missed a game because of an injury, and his 210 consecutive regular-season starts between Nov. 21, 2004 through Nov. 23, 2017 was the second-longest streak by a quarterback at the time to Brett Favre's 297.

"For 16 seasons, Eli Manning defined what it is to be a New York Giant both on and off the field," Giants' president and CEO John Mara said. "Eli is our only two-time Super Bowl MVP and one of the very best players in our franchise's history. He represented our franchise as a consummate professional with dignity and accountability."

RELATED: Damien Woody: Bill Callahan ‘might be best hire’ Cleveland Browns have made this offseason

RELATED: How much NFL quarterbacks make per hour will blow your mind