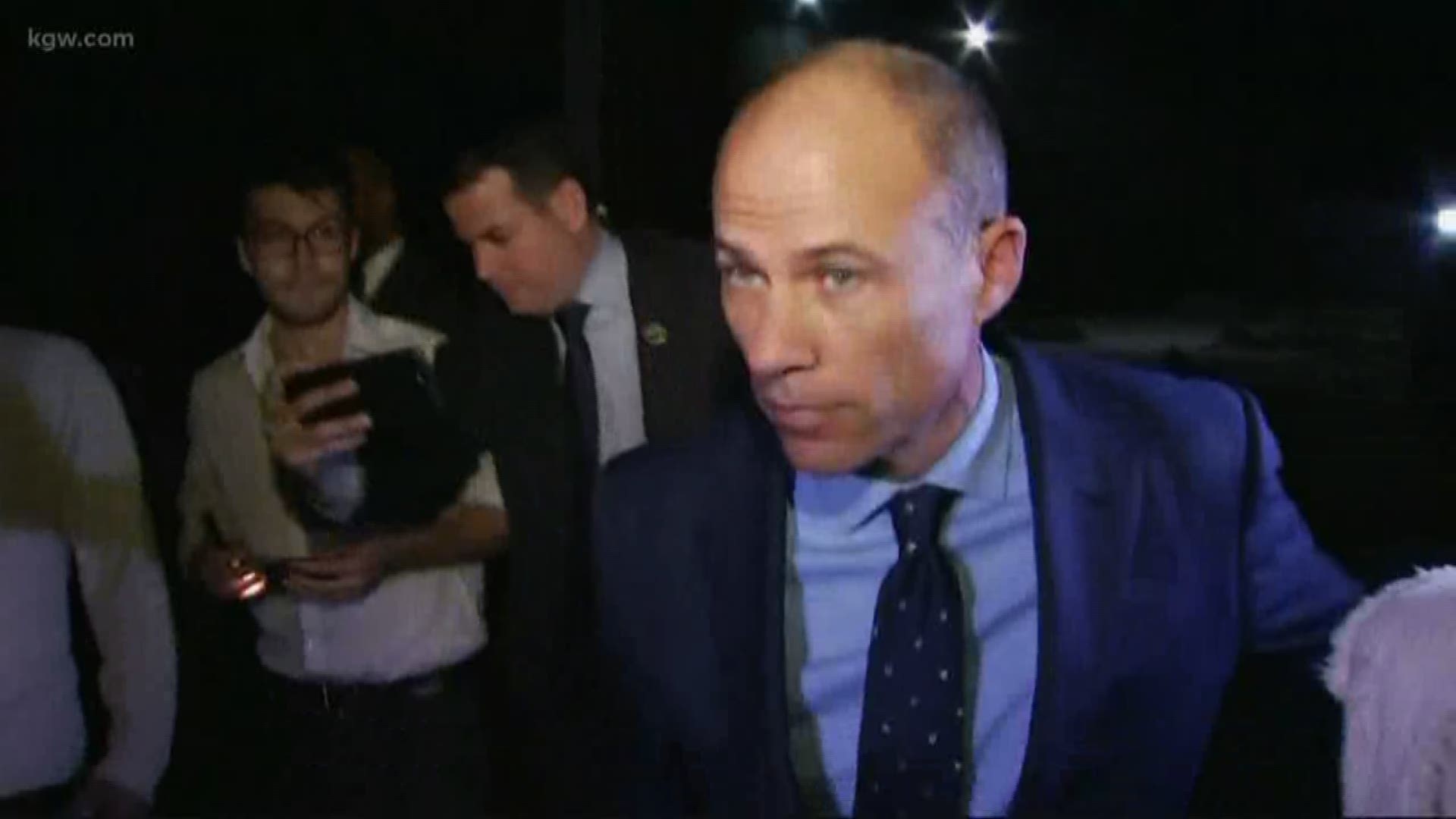 Avenatti, who was also accused of embezzling a client's money to pay his own expenses, was charged with extortion and bank and wire fraud in separate cases in New York and California. He was arrested at a New York law firm where he had gone to meet with Nike executives. It was just minutes after he tweeted that he planned to hold a news conference Tuesday to "disclose a major high school/college basketball scandal perpetrated by @Nike that we have uncovered."

"When lawyers use their law licenses as weapons, as a guise to extort payments for themselves, they are no longer acting as attorneys. They are acting as criminals," said Geoffrey S. Berman, the U.S. attorney in New York.

California investigators had been building a case against Avenatti for more than a year, but prosecutors in New York said their investigation began only last week and was completed in days.

In the California case, Avenatti allegedly misused a client's money to pay his debts and those of his coffee business and law firm. Federal prosecutors said he also defrauded a Mississippi bank by using phony tax returns to obtain millions of dollars in loans.

The allegations "paint an ugly picture of lawless conduct and greed," said Nick Hanna, the U.S. attorney in Los Angeles. Avenatti describes himself on Twitter as an attorney and advocate, but the accusations describe "a corrupt lawyer who instead fights for his own selfish interests."

Avenatti appeared briefly in court Monday evening in New York and was ordered released on $300,000 bond. He did not enter a plea. Emerging from the courthouse, he thanked the federal agents who arrested him for being courteous and professional.

"As all of you know, for the entirety of my career I have fought against the powerful. Powerful people and powerful corporations. I will never stop fighting that good fight," he said. "I am highly confident that when all the evidence is laid bare in connection with these cases, when it is all known, when due process occurs, that I will be fully exonerated and justice will be done."

He also sent a tweet of thanks to his supporters early Tuesday morning.

"I want to thank all of my supporters for your kind words and support today. It means a lot to me. I am anxious for people to see what really happened. We never attempted to extort Nike & when the evidence is disclosed, the public will learn the truth about Nike’s crime & coverup," Avenatti tweeted.

The arrest was a sharp reversal of fortune for the 48-year-old lawyer, who, less than a year ago, emerged as a leading figure in the anti-Trump movement, with relentless cable news appearances, a hard-punching style and a knack for obtaining information about others' wrongdoing. At one point, he even flirted with a presidential run.

Donald Trump Jr. gloated over the arrest on Twitter.

"Good news for my friend @MichaelAvenatti, if you plead fast enough, you might just get to share a cell with Michael Cohen!" he wrote, referring to the former Trump lawyer set to go to prison next month for crimes that include orchestrating hush-money payments to Daniels. Trump mocked Avenatti by ending with the lawyer's trademark hashtag #basta, an Italian word meaning "enough."

Prosecutors said Avenatti and another attorney, whom they called a co-conspirator, initially approached Nike on behalf of a client who coached a Nike-sponsored Amateur Athletic Union basketball program in California.

They claimed to have evidence of misconduct by Nike employees and threatened to hold a news conference last week on the eve of a company's quarterly earnings call and the start of the NCAA tournament. Avenatti told Nike the company could either pay them $15 million to $25 million to investigate the allegations, or pay him more than $22 million for his silence, the criminal complaint said.

Two people familiar with the investigation confirmed that the unidentified co-conspirator was Mark Geragos, a Los Angeles criminal defense lawyer known for his work with celebrities. The people spoke on condition of anonymity because the information was not made public by prosecutors.

Geragos, a CNN contributor, has a client list that has included Michael Jackson, Winona Ryder, Scott Peterson and most recently Jussie Smollett, the actor accused of fabricating a racist, anti-gay attack in Chicago. Geragos did not respond to messages seeking comment. Within hours, CNN cut ties with him.

While lawyers sometimes make demands to seek out-of-court settlements, they cannot threaten to go public with damaging information to get something of value or gain leverage in a civil dispute, attorney Neama Rahmani said.

"The Department of Justice historically has been very cautious when charging attorneys, so they likely have evidence that Avenatti seriously crossed this line," said Rahmani, a former federal prosecutor.

The company "firmly believes in ethical and fair play, both in business and sports, and will continue to assist the prosecutors," Nike said in a statement.

He rose to national prominence by representing Daniels, whose real name is Stephanie Clifford, in a lawsuit to break a confidentiality agreement to speak about her alleged affair with Trump. He also made headlines in recent weeks for representing two women who accused R&B star R. Kelly of sexual abuse.

Daniels said she was "saddened but not shocked" by the arrest. She issued a statement Monday on Twitter saying she fired Avenatti a month ago after "discovering that he had dealt with me extremely dishonestly." She said she would not elaborate.

While Avenatti's lawsuit effectively tore up the gag order that threatened financial penalties if Daniels spoke about the case, a defamation lawsuit filed on her behalf against Trump backfired, and a court ordered her to pay the president's $293,000 in legal fees.

Avenatti himself has been dogged with tax and financial troubles in recent years.

A U.S. bankruptcy court ordered his former firm to pay $10 million to a lawyer who claimed it had misstated its profits. The Justice Department also alleged Avenatti made "misrepresentations" in the bankruptcy case and said his former firm still owed more than $440,000 in unpaid federal taxes, which Avenatti dismissed as "part of a smear campaign." He said he did not personally owe any of the money, and another lawyer later said the matter had been resolved.

The bank fraud case involved $4 million in loans he got from Peoples Bank in Biloxi, which prosecutors said he obtained by filing fraudulent tax returns claiming $14 million in income over three years. However, he never filed tax returns those years, nor paid the $2.8 million he reported on the forms. In fact, he still owed more than $850,000 to the IRS at the time for previous income.

Mark Pearson, the assistant agent in charge of the IRS office in LA, said Avenatti's crimes supported a $200,000-a-month lifestyle, a car racing venture and pricey homes in the wealthy Orange County communities of Newport Beach and Laguna Beach.