How to spot hidden cameras in hotels, vacation rentals

“When I was getting in bed, I noticed the two little boxes plugged into the outlets... and found out they were cameras," Airbnb customer Max Vest said. 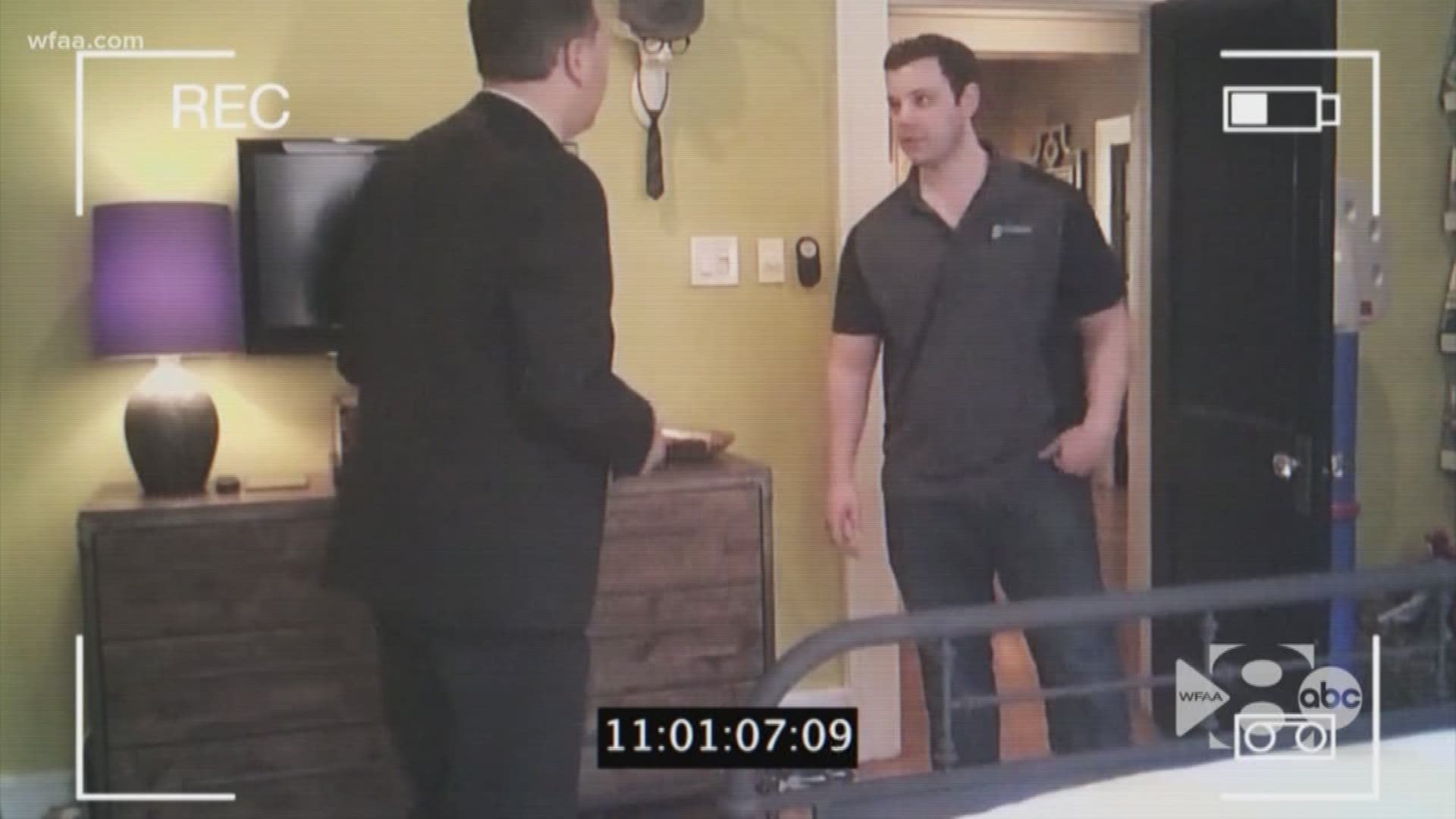 DALLAS — Hidden camera technology is cheaper and easier to conceal than ever before, which is creating new concern after several high-profile discoveries of tiny cameras that were secretly watching guests in hotels and vacation rentals.

“We have pens. We have video glasses. We have stationary devices like air purifiers that look like they’re purifying the air but have cameras in them,” said Michael Dear, owner of SpyCentre Security in Plano, describing some of products his firm sells.

RELATED: Arlington will ban Airbnbs and other short-term rentals across most of city

SpyCentre outfitted a house with some of the latest cameras to illustrate how much they can now blend in to a home and how difficult many are to detect.

“The battery life on this one is pretty intense because it can actually go to sleep when there’s no motion and it can last years,” SpyCentre Security employee Tim Paoletti explained, holding a small black leather-bound notebook.

But if you open this two-ringer binder and examine it closer, there’s a small panel of controls built into the interior spine of the book.

“So, the SD card and all the controls go in right here,” Paoletti said.

It looks like a day planner portfolio and hides in plain sight.

Camouflaged on the exterior spine of the book is a tiny camera lens, an infrared illuminator, and a motion sensor.

Under a television in a bedroom sits a Philips DVD player.

“This is an actual functioning Blu-ray player,” Paoletti continued. “What we have is a High Definition camera that record directly to an SD card, but then also connect to WiFi so you can see it remotely.”

The camera blends so well into the face of this device that Paoletti initially had trouble pointing it out.

“What they do is, they literally buy a Philips BluRay player – so this is normal from Philips – and then they modify it and put all the equipment inside the case there,” he said.

“In the old days, you could always find something with a pinhole. There had to be a pinhole. But now a lot of things are using an opaque glass that the camera can see through that you don’t have to have a pinhole anymore,” Dear said.

“When I was getting in bed, I noticed the two little boxes plugged into the outlets and wasn’t sure what they were, so I unplugged them, looked them up and found out they were cameras, and they had memory cards in them,” he said.

Vest said that happened to him inside an Airbnb he rented in Miami last year.

He ejected the two memory cards in the devices and handed them over to Miami Police.

“It’s my understanding that it’s 64 gigabytes of data, and the investigators have just seen multiple clips of individuals who have stayed at this facility,” Vest’s attorney Shannon Schott said. “Invasion of privacy is extremely serious because the internet is written in ink. Once it goes out to the web, it’s never coming back.”

Airbnb said it forbids its hosts to place cameras in bedrooms or bathrooms. Security cameras are allowed in common areas in a home and must be clearly disclosed in “the house rules” but can never be hidden.

“We have worked to fully support Mr. Vest, including a refund for the reservation. This host has been removed from our community,” Airbnb spokesman Benjamin Breit said. “We require hosts to clearly disclose any security cameras in writing on their listings and we have strict standards governing security devices in listings.”

But it’s not just vacation rentals. Hotels have had their own problems.

A young woman filed a lawsuit against Hilton after video of her showering at a Hampton Inn in New York ended up online.

"We were shocked and stunned to learn of the allegations raised,” a spokesperson for the hotel told a local ABC television station in New York. “Thus far, no evidence of any kind has been found during our initial review of the situation. Recently, the hotel underwent a complete renovation. During that process, no recording devices of any kind were uncovered. We will continue to work with the authorities to discover the perpetrator and see that [he or she] is held accountable.”

A case in South Korea made world news. For months, 1,600 hotel guests were secretly streamed live at several hotels in Seoul until police busted four men behind it in March.

So, what are vacationers or business travelers supposed to do after checking into hotels or vacation rentals?

“I personally concern myself with things that are plugged in. You know, clock radios, alarm clocks, air purifiers, little lamps,” Dear said.

SpyCentre Security sells gadgets to sweep a room and look for lenses along with frequency detectors to pinpoint devices emitting WiFi signals.

Experts also suggest guests unplug devices, turn them around or drape a towel over anything else that might look suspect.

Technology has made cameras smaller and easier to conceal, which now requires vigilance on vacation.

RELATED: Kids and guns: What happens when a child finds a gun?