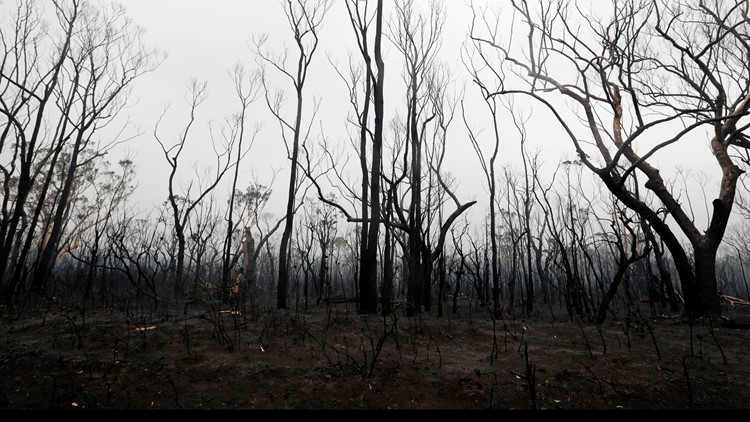 As the Guardian reports, ferries have been operating night and day working to evacuate tourists back to the Australian mainland. Firefighters have been battling flames for weeks now. The luxury Southern Ocean Lodge has been destroyed by the wildfires, along with the Flinders Chase wilderness area.

A power pole has collapsed after a fire ripped through near Kangaroo Valley, Australia, Sunday, Jan. 5, 2020. The deadly wildfires, which have been raging since September, have already burned about 5 million hectares (12.35 million acres) of land and destroyed more than 1,500 homes. (AP Photo/Rick Rycroft)
AP

Farmers on Kangaroo Island were reportedly shooting fire-injured sheep Sunday and the former major Jayne Bates said, "a lot of our blokes have gone out today to destroy injured sheep, you're talking thousands." Bates also told the Guardian that a large number of farm buildings had been destroyed.

According to Bates, farmers were digging pits to bury the sheep in. Bates said the fires have been "the worst we've ever had." The bush fires are said to have destroyed $20 million worth of bluegum and pine trees that are run by Kangaroo Island Plantation Timber. 600 properties remain without power.

The Daily Mail reported that Kangaroo Island Wildlife Park co-owner Sam Mitchell said his team is working to rescue surviving animals as quickly as possible. Reports say that there are fears that over half of the 50,000 koala population on Kangaroo Island have perished after Friday's devastating fire.

And for the surviving animals, wildlife experts say there is no food left for them, so efforts to keep them from starving are underway.