China lashes out at Hong Kong protest targeting its office

Later Sunday, protesters trying to return home were attacked inside a subway station by assailants who appeared to be targeting pro-democracy demonstrators. 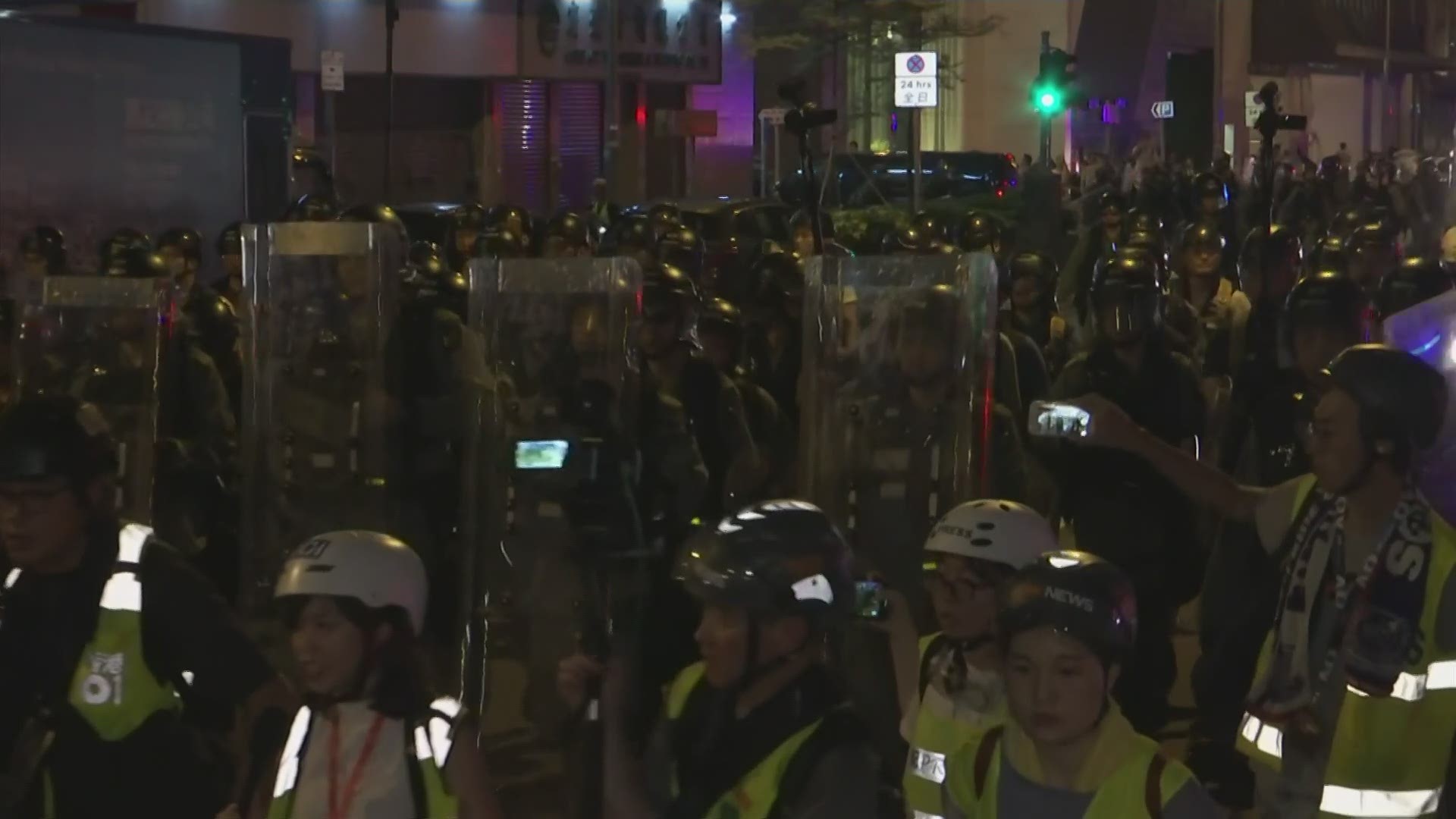 China on Monday harshly criticized a weekend demonstration in which eggs were thrown at its office in Hong Kong, accusing the demonstrators of violence without mentioning a violent attack against protesters and civilians the same night.

A group of protesters targeted China's liaison office on Sunday night after more than 100,000 people marched through the city to demand democracy and an investigation into the use of force by police to disperse crowds at earlier protests.

Later Sunday, protesters trying to return home were attacked inside a subway station by assailants who appeared to be targeting pro-democracy demonstrators. At least 45 people were injured, of whom 22 remained hospitalized Monday morning, including one man in critical condition, the Hospital Authority said.

Another 14 people were injured as police used tear gas to clear protesters in central Hong Kong. Police said on their official social media accounts that protesters threw bricks and petrol bombs at them and attacked the police headquarters.

RELATED: Largest of its kind in Hong Kong, police seize explosives ahead of weekend protests

The attack on the liaison office touched a raw nerve in China. China's national emblem, which hangs on the front of the building, was splattered with black ink. It was replaced by a new one within hours.

"These acts openly challenged the authority of the central government and touched the bottom line of the 'one country, two systems' principle," the government's Hong Kong and Macao Affairs Office said in a statement Sunday.

Lam repeated the same statement to reporters Monday, adding that the vandalism "hurt the nation's feelings."

The "one country, two systems" framework, under which the former British colony was returned to China in 1997, allows Hong Kong to maintain a fair degree of autonomy in local affairs. Demonstrators fear the pro-Beijing government in Hong Kong is chipping away at their rights and freedoms.

A group of pro-China lawmakers held a news conference Monday appealing for a halt to the violence, saying it was a blow to Hong Kong's reputation and is scaring away tourists and investors.

They also urged police to tighten enforcement against the protesters, whom Regina Ip, a former security secretary, labeled as "rebels."

"The violent attack on the Liaison Office ... is a direct affront to the sovereignty of our country," Ip said.

She said the police were "overstretched" when asked why it took at least a half-hour for police to arrive at the suburban train station where protesters were attacked.

"The police have been under extreme pressure," she said.

Pro-democracy lawmaker Claudia Mo said there was "more than apparent" involvement from the triad, a branch of organized crime in Hong Kong.

"What happened last night doesn't seem accidental in any way," Mo said. "It's all organized."

Video of the attacks in Hong Kong's Yuen Long neighborhood showed protesters in black shirts being beaten by men in white shirts wielding steel pipes and wooden poles. Those under attack retreated into the trains, intimidated by the gangs of men waiting for them outside the turnstiles. The attackers then entered the trains and beat the people inside as they tried to defend themselves with umbrellas. They eventually retreated.

One of the men in white held up a sign saying "Protect Yuen Long, protect our homes."

Subway passengers filmed by Stand News and iCABLE angrily accused police officers of not intervening in the attack. Stand News reporter Gwyneth Ho said on Facebook that she suffered minor injuries to her hands and shoulder, and was dizzy from a head injury. Hong Kong's South China Morning Post reported that several people were bleeding following the attacks, with seven sent to the hospital.

The growing tumult in Hong Kong has fueled fears that China's People's Liberation Army may intervene.

A Chinese army brigade said Monday that it held an anti-terrorism exercise in southern Guangdong province. The 74th Army Group did not refer to Hong Kong in its social media statement, but military commentator and retired officer Yue Gang said that troops would be dispatched to the semi-autonomous territory if needed.

"To deface the Chinese national emblem is like acting as an enemy to 1.3 billion Chinese people," Yue said. "They must be deterred."

"If the People's Liberation Army helps to stabilize the situation, Hong Kong will benefit from law and order, but the public opinion won't buy it," Hu wrote in a commentary published on Weibo, a popular Chinese microblogging service. The public will "accuse Beijing of undermining 'one country, two systems,'" he said.