Biden says 14% of all appointees in his administration identify as lesbian, gay, bisexual, transgender or queer. 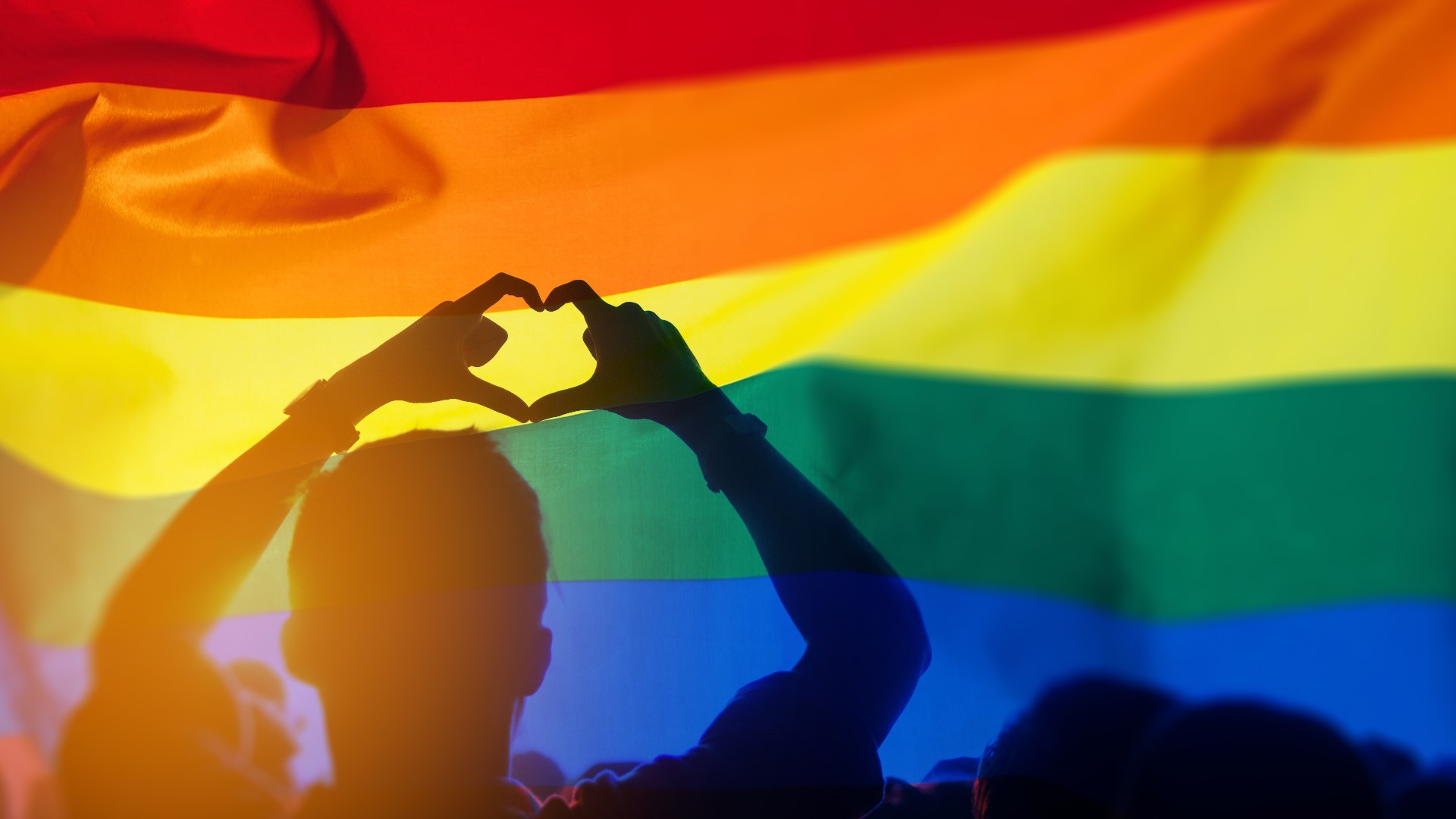 "Pride is a time to recall the trials the Lesbian, Gay, Bisexual, Transgender, and Queer (LGBTQ+) community has endured and to rejoice in the triumphs of trailblazing individuals who have bravely fought -- and continue to fight -- for full equality," the proclamation reads.

It adds: "This Pride Month, we recognize the valuable contributions of LGBTQ+ individuals across America, and we reaffirm our commitment to standing in solidarity with LGBTQ+ Americans in their ongoing struggle against discrimination and injustice."

The Biden administration has taken historic steps to accelerate toward full equality. On his very first day in office on Jan. 20, 2021, Biden signed one of the most comprehensive executive orders in history on LGBTQ+ rights. Since then he has enabled all qualified Americans – including transgender Americans – to serve their country in the military and made sure that LGBTQ+ Americans are leaders at every level of the federal government.

The proclamation from President Biden comes on the 52nd anniversary of the Stonewall Inn uprising. The first Pride march took place June 28, 1970, a year after the 1969 uprisings at the Stonewall Inn, a gay bar, which were led by trans women of color. A few other commemorations took place that year and later spread.

Biden's proclamation is a departure from the Trump administration's recognition of Pride Month. During Trump's presidency, he never issued a proclamation and only acknowledged Pride Month once in a tweet in June 2019.

"While I am proud of the progress my Administration has made in advancing protections for the LGBTQ+ community, I will not rest until full equality for LGBTQ+ Americans is finally achieved and codified into law," the proclamation reads. "This Pride Month, we affirm our obligation to uphold the dignity of all people, and dedicate ourselves to protecting the most vulnerable among us."

Credit: AP
FILE - In this Sunday, June 11, 2017 file photo, Equality March for Unity and Pride participants march past the White House in Washington.

The uprising at the Stonewall Inn in June, 1969, sparked a liberation movement -- a call to action that continues to inspire us to live up to our Nation's promise of equality, liberty, and justice for all.  Pride is a time to recall the trials the Lesbian, Gay, Bisexual, Transgender, and Queer (LGBTQ+) community has endured and to rejoice in the triumphs of trailblazing individuals who have bravely fought -- and continue to fight -- for full equality.  Pride is both a jubilant communal celebration of visibility and a personal celebration of self-worth and dignity.  This Pride Month, we recognize the valuable contributions of LGBTQ+ individuals across America, and we reaffirm our commitment to standing in solidarity with LGBTQ+ Americans in their ongoing struggle against discrimination and injustice.

The LGBTQ+ community in America has achieved remarkable progress since Stonewall. Historic Supreme Court rulings in recent years have struck down regressive laws, affirmed the right to marriage equality, and secured workplace protections for LGBTQ+ individuals in every State and Territory. The Matthew Shepard and James Byrd, Jr. Hate Crimes Prevention Act broadened the definition of hate crimes to include crimes motivated by sexual orientation or gender identity. Members of the LGBTQ+ community now serve in nearly every level of public office -- in city halls and State capitals, Governors' mansions and the halls of the Congress, and throughout my Administration. Nearly 14 percent of my 1,500 agency appointees identify as LGBTQ+, and I am particularly honored by the service of Transportation Secretary Pete Buttigieg, the first openly LGBTQ+ person to serve in the Cabinet, and Assistant Health Secretary Dr. Rachel Levine, the first openly transgender person to be confirmed by the Senate.

For all of our progress, there are many States in which LGBTQ+ individuals still lack protections for fundamental rights and dignity in hospitals, schools, public accommodations, and other spaces. Our Nation continues to witness a tragic spike in violence against transgender women of color. LGBTQ+ individuals -- especially youth who defy sex or gender norms -- face bullying and harassment in educational settings and are at a disproportionate risk of self-harm and death by suicide. Some States have chosen to actively target transgender youth through discriminatory bills that defy our Nation's values of inclusivity and freedom for all.

Our Nation also continues to face tragic levels of violence against transgender people, especially transgender women of color. And we are still haunted by tragedies such as the Pulse Nightclub shooting in Orlando. Ending violence and discrimination against the LGBTQ+ community demands our continued focus and diligence. As President, I am committed to defending the rights of all LGBTQ+ individuals.

My Administration is taking historic actions to finally deliver full equality for LGBTQ+ families. On my first day in office, I signed an Executive Order charging Federal agencies to fully enforce all Federal laws that prohibit discrimination on the basis of gender identity or sexual orientation. As a result, the Federal Government has taken steps to prevent discrimination against LGBTQ+ people in employment, health care, housing, lending, and education. I also signed an Executive Order affirming all qualified Americans will be able to serve in the Armed Forces of the United States -- including patriotic transgender Americans who can once again proudly and openly serve their Nation in uniform -- and a National Security Memorandum that commits to supporting LGBTQ+ Federal employees serving overseas. My Administration is also working to promote and protect LGBTQ+ human rights abroad. LGBTQ+ rights are human rights, which is why my Administration has reaffirmed America's commitment to supporting those on the front lines of the equality and democracy movements around the world, often at great risk. We see you, we support you, and we are inspired by your courage to accept nothing less than full equality.

While I am proud of the progress my Administration has made in advancing protections for the LGBTQ+ community, I will not rest until full equality for LGBTQ+ Americans is finally achieved and codified into law. That is why I continue to call on the Congress to pass the Equality Act, which will ensure civil rights protections for LGBTQ+ people and families across our country. And that is why we must recognize emerging challenges, like the fact that many LGBTQ+ seniors, who faced discrimination and oppression throughout their lives, are isolated and need support and elder care.

During LGBTQ+ Pride Month, we recognize the resilience and determination of the many individuals who are fighting to live freely and authentically. In doing so, they are opening hearts and minds, and laying the foundation for a more just and equitable America. This Pride Month, we affirm our obligation to uphold the dignity of all people, and dedicate ourselves to protecting the most vulnerable among us.

NOW, THEREFORE, I, JOSEPH R. BIDEN JR., President of the United States of America, by virtue of the authority vested in me by the Constitution and the laws of the United States, do hereby proclaim June 2021 as Lesbian, Gay, Bisexual, Transgender, and Queer Pride Month. I call upon the people of the United States to recognize the achievements of the LGBTQ+ community, to celebrate the great diversity of the American people, and to wave their flags of pride high.

IN WITNESS WHEREOF, I have hereunto set my hand this first day of June, in the year of our Lord two thousand twenty-one, and of the Independence of the United States of America the two hundred and forty-fifth.