Amazon continues to burn in 2020 despite promises to save it

The smoke from fires in the Amazon has been so thick around the town of Novo Progresso that police have reported motorists have crashed because they can't see. 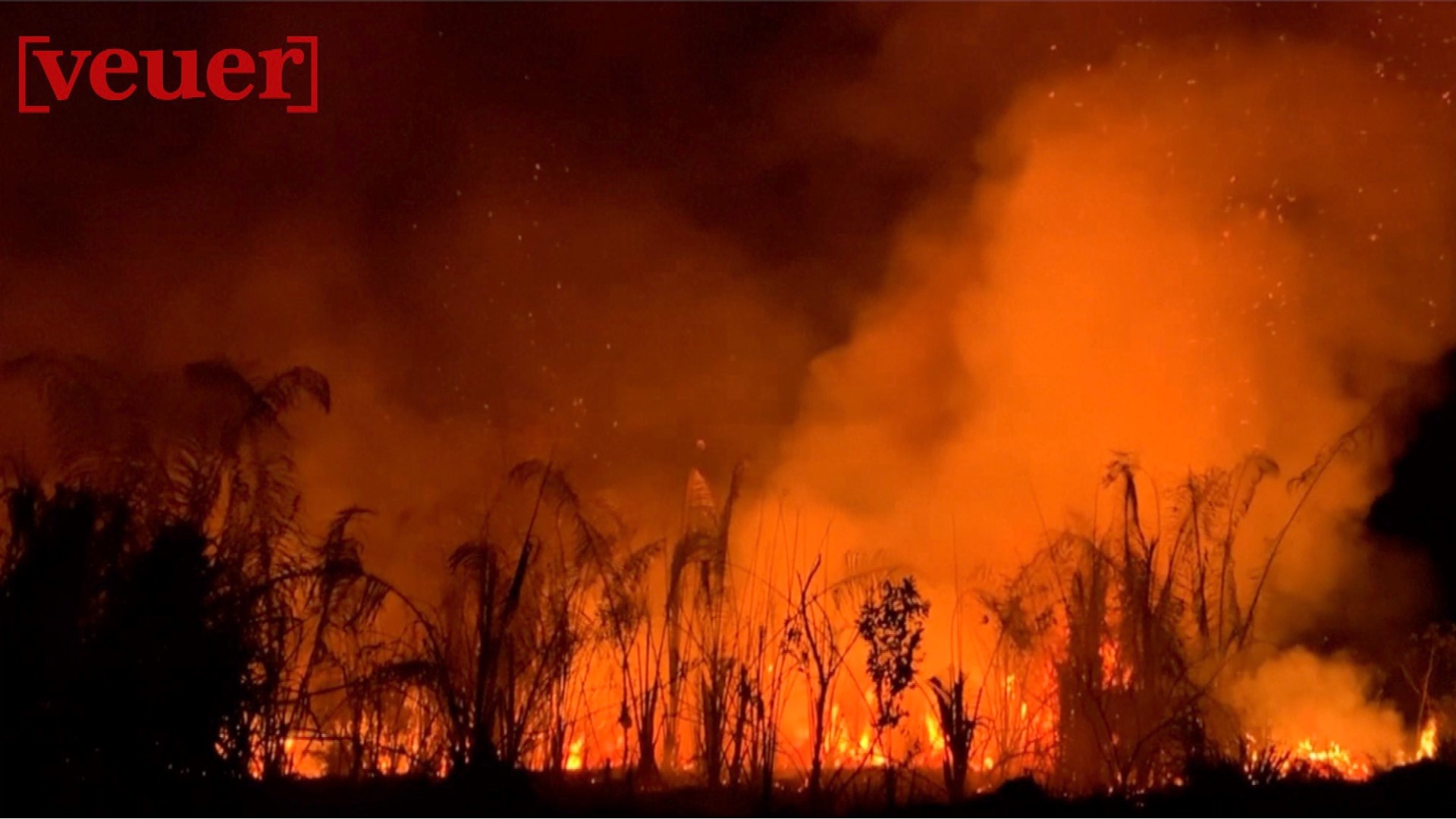 NOVO PROGRESSO, State of Pará — Editor's note: The attached video is from Aug. 2019.

A year ago this month, the forest around the town of Novo Progresso erupted into flames — the first major blazes in the Brazilian Amazon's dry season that ultimately saw more than 100,000 fires and spurred global outrage against the government’s inability or unwillingness to protect the rainforest.

This year, President Jair Bolsonaro pledged to control the burning — typically started by local farmers to clear land for cattle or to grow soybeans, one of Brazil’s top exports. He imposed a four-month ban on most fires and sent in the army to prevent and battle blazes.

But this week the smoke is again so thick around Novo Progresso that police have reported motorists have crashed because they can't see.

As smoke wreaths Novo Progresso, this year's burning season could determine whether Bolsonaro, an avid supporter of bringing more farming and ranching to the Amazon, is willing and able to halt the fires. Experts say the blazes are pushing the world's largest rainforest toward a tipping point, after which it will cease to generate enough rainfall to sustain itself, and approximately two-thirds of the forest will begin an irreversible, decades-long decline into tropical savanna.

But residents of Novo Progresso like businessman Claudio Herculano believe the city has only grown in the last few years because of increased ranching in the area.

“It pains anyone to breathe this air,” Herculano, 68, said this week. “I have a little house uphill, and I do worry a bit that it could be destroyed. But all the people here are looking for better days, and we know what drives this economy.”

Bolsonaro is sending mixed signals: He greenlit an army-led operation to fight Amazon destruction in May, but then this month he denied the region's trees can catch fire. Speaking at a video summit about the Amazon with fellow South American leaders, he also touted a year-on-year decrease in July deforestation data, omitting the fact it was still the third-highest reading for any month since 2015.

“This story that the Amazon is burning is a lie,” he claimed, even as smoke from more than 1,100 fires wafted over the region that day.

On Monday and Tuesday of this week, reporters from The Associated Press did not see a single soldier in or around Novo Progresso.

And this year could see more fires than last, according to Paulo Barreto, a forest engineer and deforestation researcher at environmental group Imazon.

At the start of the Amazon's dry season, in July, more trees had been felled, given that deforestation from August 2019 to July jumped 34% from the prior 12 months, according to preliminary data from Brazil’s space agency. Typically, after felling, the next step is burning, usually without the required authorization — since it's a far easier and cheaper way than using heavy machinery to clear brush and trees. Further, forest area degraded by logging — which is much more susceptible to wildfire than native forest — surged 465%, Barreto said.

Other parts of Brazil are also dealing with unprecedented conditions.

A Brazilian sanctuary that's home to 15% of the world's population of blue macaws was destroyed by fires, according to multiple media reports.

August and September are when the burning kicks into overdrive. And in the first half of August, satellites detected 19,000 fires across Brazil’s Amazon — putting the month on track to match August 2019's blazes that drew global outcry.

The 2019 fires, while almost a 40% jump from the prior year, were only slightly higher than the average for the preceding decade. But Bolsonaro’s drive to reduce environmental protections to spur economic development coupled with the surge in deforestation had primed the world for outrage. Some of Europe's heads of state railed against Bolsonaro or suggested pulling funding, and its lawmakers threatened to refuse ratification of the free-trade deal Brazil spent two decades negotiating. Brazil's agribusiness exporters feared boycotts, and asset managers considered divesting from Brazilian companies.

Bolsonaro dispatched the Army to help smother the flames — and the criticism — in late August 2019.

Last year's blazes also triggered a federal police investigation into what became known as the Day of Fire — when several fires were set. They are seeking to determine if a group of ranchers had coordinated the burning on messaging app WhatsApp.

In October, they sent their initial findings to a federal judge in the Amazon city of Itaituba, requesting an extension of their probe’s deadline, according to Sérgio Pimenta, the police detective overseeing the investigation.

Last Thursday — almost 10 months later — the judge granted the request, without providing an explanation for the delay, Pimenta said. The judge's office declined to comment.

The episode underscored how difficult it is to bring charges in such cases, according to Paulo Moreira, the public prosecutor on the Amazon task force whose jurisdiction includes Novo Progresso.

“The sense of impunity is very large,” Moreira said by phone.

Joaquim da Silva, a rancher in Novo Progresso, says the problem is that many lack title to the land they use — and that makes it easier for them to avoid punishment even as they destroy with reckless abandon. His own neighbor set fires days earlier.

Ranchers are also making headway into virgin forest. Novo Progresso — meaning New Progress in Portuguese — is adjacent to the Jamanxim National Forest and environmental protection area, both of which have been chipped away at by deforestation; from above, they appear to be disintegrating.

The Amazon has lost about 17% of its original area and, at the current pace, will reach a tipping point in the next 15 to 30 years, said Carlos Nobre, a prominent climatologist. As it decomposes, it will release hundreds of billions of tons of carbon dioxide into the atmosphere, making it “very difficult” to meet the Paris Agreement’s climate goals, said Nobre, senior scientist with the University of Sao Paulo’s Institute of Advanced Studies.

He added signs of change are emerging already: The dry season in the southern third of the Amazon — where Novo Progresso is located — has reached nearly four months, up from three months in the 1980s. It’s grown hotter, too.

Novo Progresso’s 25,000 residents occupy an area bigger than New Jersey and Connecticut combined, making it one of Brazil’s largest and most sparsely populated municipalities. Pick-up trucks and motorcycles kick up dirt on its roads lined with small shops and evangelical churches. Entering its dusty downtown from the south, one is greeted by a billboard of Bolsonaro that says he supports development. It was paid for by farmers; he won the area in a landslide in the 2018 election.

This year, Bolsonaro sent troops in ahead of the dry season, in May — but Vice President Hamilton Mourão has said that deployment was six months too late to rein in 2020 deforestation. Still, the so-called Operation Green Brazil 2 will reduce fires, according to Mourão, who is leading it.

Eleven government bodies are coordinating the operation, which includes 3,400 soldiers and 269 agents from allied agencies, who have handed out 442 million reais ($82 million) in fines and seized about 700 chain saws and 28,000 cubic meters (36,600 cubic yards) of wood, as well as more than 500 boats and 200 cars, according to the Defense Ministry.

“We’re going to proceed with this type of work until the end of 2022, or until the group that deforests realizes this can’t be done any more,” Mourão, a retired general, said last month.

It's not clear whether these efforts will be enough to calm the global backlash. Izabella Teixeira, who was the environment minister in a leftist Workers' Party government, told the AP the government has yet to prove it has changed its Amazon stance.

“It is starting a new phase," she said. "If it is credible, if it is efficient and permanent, we will need to evaluate over the next 12 months.”