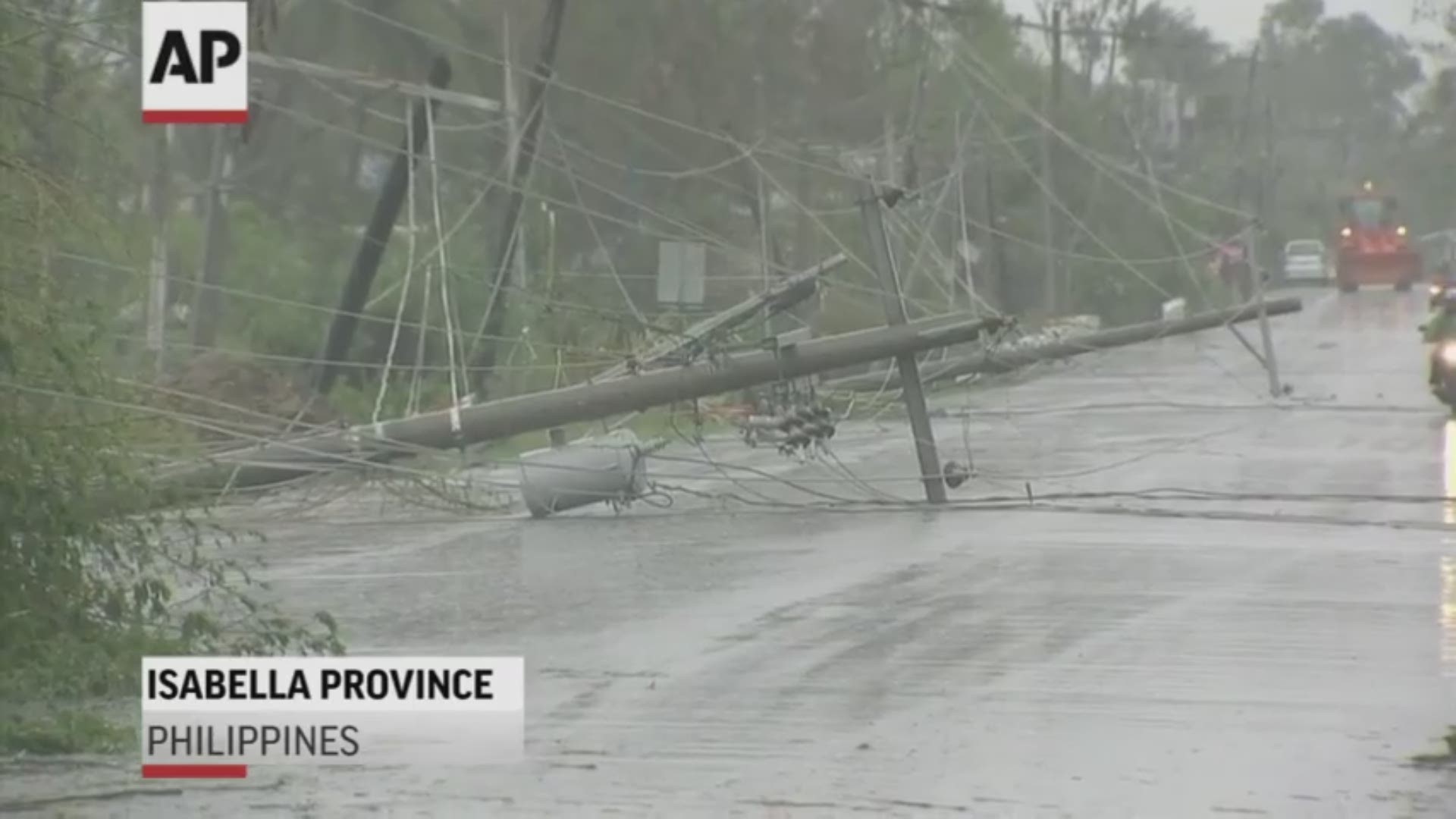 Credit: AP
A resident walks next to a toppled electric pole after Typhoon Yutu slammed the northeastern Philippines on Tuesday, Oct. 30, 2018.

ILAGAN, Philippines – A strong typhoon blew across the northern Philippines on Tuesday, setting off landslides that left at least six people dead and forcing thousands to flee from villages that were still recovering from a deadly storm last month, officials said.

Regional police Chief Superintendent Rolando Nana said authorities were attempting to verify a report that a landslide buried a government building under construction in Natonin in Mountain province, trapping more than 20 people. Several landslides blocked roads and prevented policemen from reaching the area, he said.

Typhoon Yutu weakened considerably from its earlier super typhoon status before slamming into the Philippines’ northeastern Isabela province before dawn. It knocked down trees and power posts and ripped roofs off houses and stores, officials said.

The storm weakened further as it blew across the Sierra Madre mountain range and then barreled westward through Nueva Vizcaya, Benguet and La Union provinces, where an earlier typhoon, Mangkhut, left more than 100 people dead and missing in mid-September.

Yutu’s sustained winds of 93 mph when it hit the Philippines was considerably less than the 180 mph registered earlier as it tore through the U.S. territory of the Northern Mariana Islands, where it knocked out power, destroyed homes and delayed elections.

In Ifugao province, Baltazar Pinnay and his three young daughters died in a landslide in Banaue, which is famous for its mountainside rice terraces. Rescuers dug up their bodies, police said.

Separate landslides in the upland provinces of Kalinga and Mountain province, near Ifugao, killed a 40-year-old man and a young girl, Nana said.

More than 10,000 villagers moved to emergency shelters in several northern provinces. In Cagayan province, Gov. Manuel Mamba sai that despite improving weather after the typhoon passed, he asked hundreds of villagers not to return immediately to their homes near a swollen river.

“We didn’t even have to do forced evacuations. The people are still scared. They readily moved from the mountainsides and away from the river after our police declared it was time to evacuate,” said Mayor Victorio Palangdan of Itogon, a mountain town where more than 90 villagers died earlier, mostly due to landslides set off by Mangkhut.

Mangkhut left more than 100 people dead and missing, mostly in Itogon and nearby mountain towns, and caused considerable damage to vegetable, corn and rice farms because it struck during the harvest season.

One of the world’s most disaster-prone countries, the Philippines is battered by about 20 typhoons and storms each year. It is also located in the Pacific “Ring of Fire,” the arc of seismic faults around the Pacific Ocean where earthquakes and volcanic activity are common.